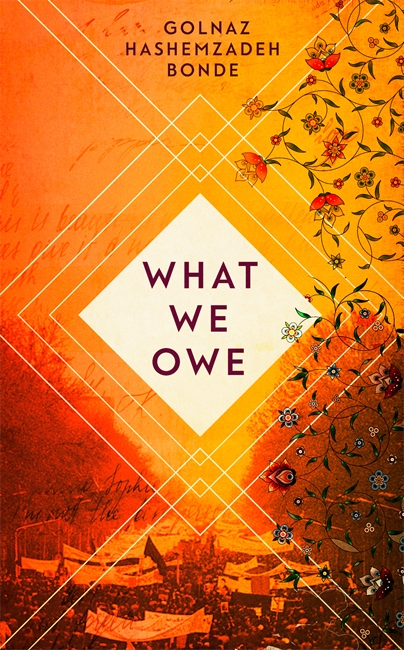 Born in Iran, Golnaz Hashemzadeh Bonde fled with her parents to Sweden as a child. In her novel What We Owe, deftly translated from Swedish by Elizabeth Clark Wessell, one woman rages at the betrayal of a revolution, the past injustices that led to her exile and the cancer that will prematurely kill her. It is a devastating portrait of a life ruined by oppression, survivor’s guilt and the longing for home.

Nahid, a refugee living in Sweden, has recently been diagnosed with cancer and is told she has ‘at most six months left to live’. She looks back on her life with bitterness and anger. She is divorced from her late husband, Masood, and is resentful of her daughter Aram’s newly found happiness. She regrets her inability to put down roots in her adopted country and her failure to give her daughter the stability and happiness she had hoped for.

Thirty years earlier, Nahid and Masood had been lovers and idealistic student revolutionaries. Nahid was in medical school: ‘you can’t imagine what an accomplishment that was. It was like a dream.’ Masood was studying agriculture. When they first met they talked all night: ‘He had ideas, more radical than any I’d ever heard. Ideas about tearing down all the old structures that locked us into our destinies. He talked about the people, about the people’s right to bread. He spoke of justice as if were a party, as if it were our job to arrange it. Send out the invitations.’ They started to attend clandestine student meetings in the mountains. Then, ‘[T]he revolution fell upon us like a rain of stars’. They marched and witnessed the transfer of power, but Khomeini’s clerical forces gained the upper hand.

The universities were closed, but the students continued to demonstrate. Their repression was swift and ruthless. Nahid, we learn, cannot forgive herself for having lost her younger sister, Noora, during a protest march – she let go of her hand and never saw her again. The couple’s optimism swiftly turns to despair as they mourn the loss of Noora and other fallen comrades, and their relationship flounders with the failure of the revolution. The couple feel caged in Iran, but marry anyway, and Nahid gives birth to Aram. Eventually, realising they will never be safe and wanting a better life for their young child, they seek asylum in Sweden. Like so many exiles, they never manage to settle, integrate or find the peace they both yearn for. The landscape is unfamiliar, their hopes have been dashed, and their future is suddenly inconsequential.

At first, Nahid’s bitterness is interspersed with recollections of happier times, but her rapid decline soon silences her. She realizes that since the disappearance of Noora she has rarely experienced a moment of peace. The women in her family have always been brutally treated. Nahid’s mother, married off at the age of nine, gave birth to seven children before she was 37. Nahid and her older sister were regularly abused and beaten by their husbands: ‘I suppose it was just the irony of fate. There were not as many liberal men available as there were women in my family. So, often we were stuck with assholes.’ It is particularly cruel that at the end of her life, Nahid longs for the love and forgiveness of her mother, who is herself dying. She begins to doubt the wisdom of her decision to leave Iran and wonders ‘what’s worth more. Freedom and democracy or people who love you. People who will take care of your children when you die[?]’

In the novel’s final quarter, the tone shifts. There is a glimmer of hope. Suddenly Nahid has something to live for. We realize her anger is born from guilt and that her heart, while aggrieved, is also full of love.

Given the deadly conflict that continues to rage in Syria, What We Owe is a timely novel about the horrors of war and displacement. It’s also a poignant account of the loneliness of exile and how, if left unchecked, violence and despair reverberate down the decades. Hashemzadeh Bonde understands the power of compassion and her perceptive book demonstrates that forgiving oneself is the first step towards redemption.

Translated from the Swedish by Elizabeth Clark Wessell