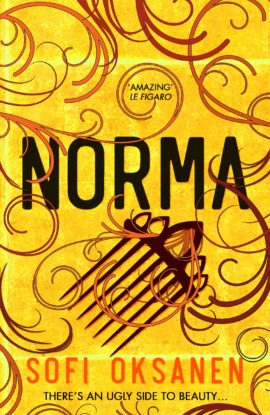 Anita Naaka has committed suicide by jumping into the path of oncoming train, leaving her grown up daughter, Norma, alone. As Sofi Oksanen’s novel starts, we find Norma looking for a taxi to take her home from her mother’s funeral, while at the same deciding that she needs to somehow continue living her life as normally as possible.

This, however, turns out to be a hard task, as Norma has not just lost her one friend, but also the only person who knows her secret – one which they have tried to keep under wraps their entire lives.

Furthermore, at the funeral, a stranger, who has introduced himself as Max, has confronted Norma, suggesting that there is some ‘unpleasant business’ to take care of now that Anita is dead and hinting that he and Norma’s mother once had some kind of relationship.

However Norma has help: her hair has a supernatural quality: it grows uncontrollably and to a great length each day, so Norma needs to wear a turban to hide it. But it is also strangely sensitive to the environment and is incredibly perceptive, alerting Norma to the emotions, intentions and health of people around her.

Using these abilities, the hair reinforces Norma’s suspicions that her mother’s death was not all it seemed. She decides to investigate, and gets a job at the hair salon where Anita was working when she died. Thus, Norma is drawn into the black market for hair. She discovers that hair extensions are an extremely lucrative business and that Ukrainian suppliers provide the gold standard. As she learns more about Anita’s past, Norma is pulled ever deeper into the darker side of a global trade, a world, created by Oksanen, in which hair salons engage in bloody wars over territory, and in which the victorious ‘clan’ can claim the rights to produce high-quality hair extensions.

And yet below the surface even darker deals are being made: the owners of the hair salon have set up a surrogacy business, using women from poor countries, where no questions are asked.

Oksanen is exploring some clearly feminist themes here; and almost all her characters are female and the topics the novel touches upon – love, marriage, children, mental health and drug abuse – are all examined from a female point of view.

However, despite the wonderfully imaginative storyline, somehow the plot itself failed to grab and hold my full attention. And neither did the bleak main character, Norma, or her cause arouse any particular sympathy in me. There’s no doubt that the social criticism in Norma is important, but I felt that, unlike in Oksanen’s previous fiction, it lacks depth. Perhaps the story, which is as twisted and tangled as Norma’s hair, obscures the author’s message, making it, for me at least, only partially visible.

Translated from the Finnish by Owen Witesman