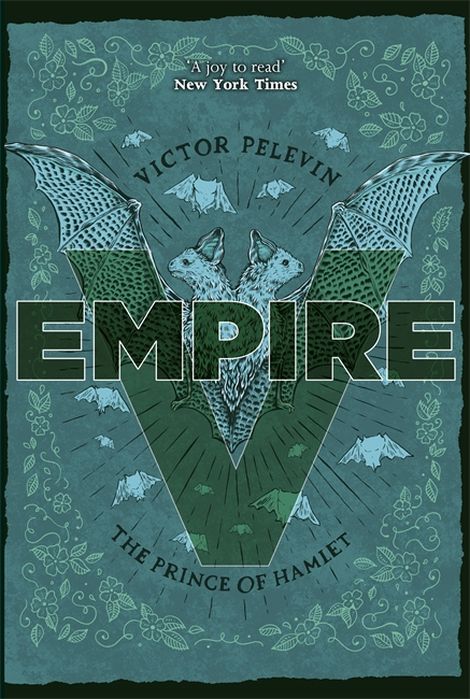 “The glum, commonplace act of love … always brought to my mind our electoral system. After enduring interminable torrents of lies, the voter is finally allowed to insert the only real – and pathetic – candidate into an indifferent niche, which has already seen so much tampering, doctoring and rigging it no longer cares two hoots about the outcome. The voter is then supposed to persuade himself that this boring performance has been precisely the event that turns the whole world delirious with ecstasy.”

Yes, Russia has invaded our beds as well as our ballot boxes and the old in-and-out will never be the same. At least that’s one philosophical observation in Empire V, the remarkable Victor Pelevin’s latest novel to be translated into English. Many years ago I reviewed Pelevin’s Buddha’s Little Finger, Homo Zapiens, and The Sacred Life of the Werewolf for the Los Angeles Times Book Review. I concluded that he was one of the most creative writers in any language. The ink-smudged fingerprints of Gogol, Dostoyevsky, and Bulgakov were all over his pages. And yet he had a sui generis talent to pulp story, history, politics, and trash into the kind of clockwork milkshake that would keep any of my droogs – low or highbrow – entertained and stimulated for weeks.

It may be a sign of the times that Pelevin, once published in English by literary giants such as Viking and Penguin, has found his recent novels in the catalogue of Gollancz, itself the once-proud publisher of Orwell and Amis, but now wholly dedicated to sci-fi and fantasy. We are living in an overstimulated age, and publishers recognise our need for niches – doctored and rigged as they may be.

To be fair, the V in Empire V is for vampire. A disaffected young Muscovite named Roman, born in the waning years of the Soviet Union, follows a random invitation chalked onto the pavement to enter a nearby darkened building. Inevitably taking this bait our hero is led into twilight longings for another young initiate (and sure, why not cast Kristen Stewart in the role?).

But the curiosity that leads Roman down the rabbit hole into the vampire Wonderland is fueled by more than hormones. He has philosophy in his blood (or “red liquid” as Pelevin’s vampires call it) and wants to know about the meaning of life in its full existential-religio-Monty Pythonesque glory. This gives Pelevin a chance to create a “Vampire’s Guide to the Galaxy” as rich as any Terry Gilliam animation. Humans, in this philosophy, are to vampires as cows are to humans – docile ruminants created to be milked, although in the human case, not of a white but of a red liquid.

As with much literature from foreign countries, Pelevin’s novel/treatise/satire is full of many social and political references that will fly over the English reader’s head. Thankfully, Anthony Phillips does an excellent job of translating the essence of Pelevin’s puns and wordplays in a way I can only imagine captures the original spirit of a work by a writer who is still, for me, wildly original in any language.

Translated from the Russian by Anthony Phillips