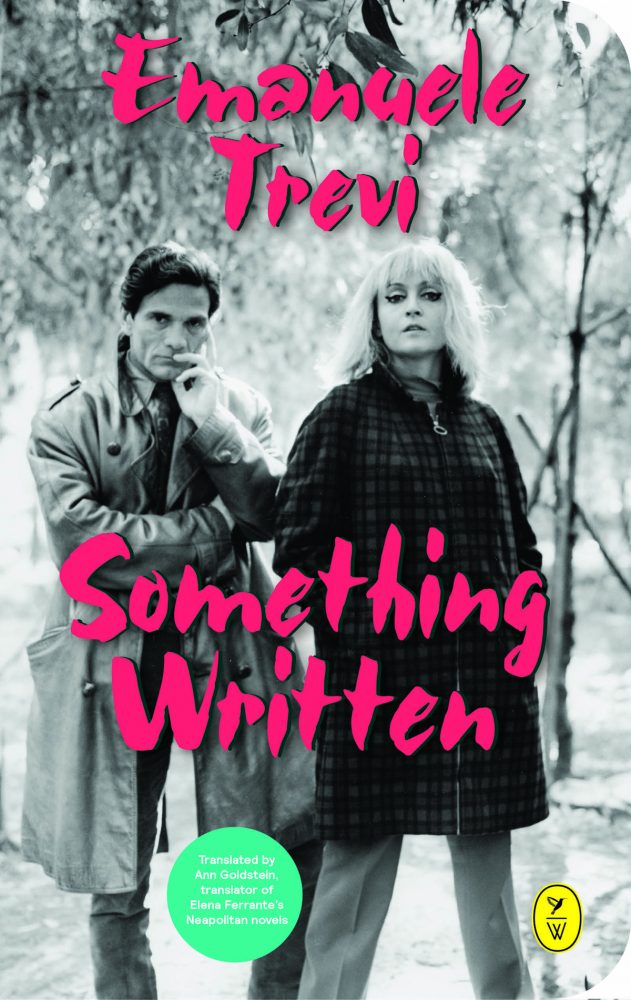 In Italian, Emanuele Trevi’s Something Written is a spectacular centaur of a book – part essay, part novel – about the agrodolce vita, the sweet and sour life, of Rome in the early 1990s, at the dawn of the Berlusconi period. The hero is a young slave at a foundation dedicated to the preservation and canonization of the poet and filmmaker Pier Paolo Pasolini, who was murdered in still mysterious circumstances on December 2nd, 1975. The Slave mistress of the Foundation is one Laura Betti, a former actress, known for her eroto-sadistic turns in movies by Fellini, Bertolucci, and, of course, Pasolini. Twenty years after the death of Pasolini and dozens of kilos heavier, Betti, dubbed The Madwoman, is making life miserable for our hero. Something Written chronicles his effort, against all odds, to make sense of the unpublished notes and interviews of PPP, as Pasolini is called, and circles in its Italianate way around the author’s final oeuvre, an unfinished novel called Petrolio.

In a letter to Alberto Moravia that Trevi quotes as an epigraph, Pasolini describes Petrolio as “a novel, but it’s not written the way real novels are written: its language is that of essays, of newspaper articles, of reviews, of private letters, even of poetry.” And indeed, Something Written plays in that same trans world, with the same ambition of Truman Capote (also invoked by Trevi), Vladimir Nabokov, and W.G. Sebald. Winner of the 2012 European Literature Prize and a finalist for Italy’s coveted Strega Prize, Something Written celebrates the Italian love of language in all forms.

Having lived in Italy for a decade, I’ve marveled at how Italians love to talk. They begin early and study oral verbosity in high school, where they learn how to nest phrases within phrases and speak for whole minutes without drawing breath. At dining tables and restaurants, standing up at bars from Pompeii to Etna, the chattering classes don’t just chatter, they erupt. And when they write about politics and culture in newspapers and magazines, their linguistic spaghetti can take pages, hours, to roll onto a fork.

So pity the poor translator who has to convert not only the meaning but the tone of an Italian novel into English – a language that prefers cutting its phrases into neat syntactical slices. The best translators interpret not only the foreign language but the foreign culture for their audiences. In a novel, whose very subject is culture, the best translators bring a knowledge of two cultures and the agility to find ways to give the reader an appreciation for the life that the writer animated in the original.

Alas, Ann Goldstein, the celebrated translator of Elena Ferrante, is not one of these elect. Time after time, she speeds through Trevi’s text without a backwards glance at context. In one early scene, Goldstein correctly translates the cartoon character Braccio di Ferro as Popeye and his gluttonous friend Poldo Sbaffini as Wimpy. And yet she renders the polpette that Poldo Sbaffini eats as meatballs – the literal translation – rather than invoking Wimpy’s famous dictum: “I’d gladly pay you Tuesday for a hamburger today.”

These lapses in an otherwise well-translated book might be overlooked. But Goldstein has also chosen to leave her work in the syntax of Trevi’s original Italian, without any attention to the niceties of the English language. It’s a shame. While a patient reviewer might slog through the translation, turning to the original for relief, an innocent reader, even one dedicated to the films and poetry of Pasolini, might be forgiven for throwing the book out of her palazzo in frustration. One well-known editor has written that Ann Goldstein’s “name on a book now is gold”. For poor Emanuele Trevi, however, her Midas touch has turned his fruit inedible.

Translated from the Italian by Ann Goldstein

Jonathan Levi is the author of the novels A Guide for the Perplexed and Septimania, which will be published by Duckworth on August 11, 2016