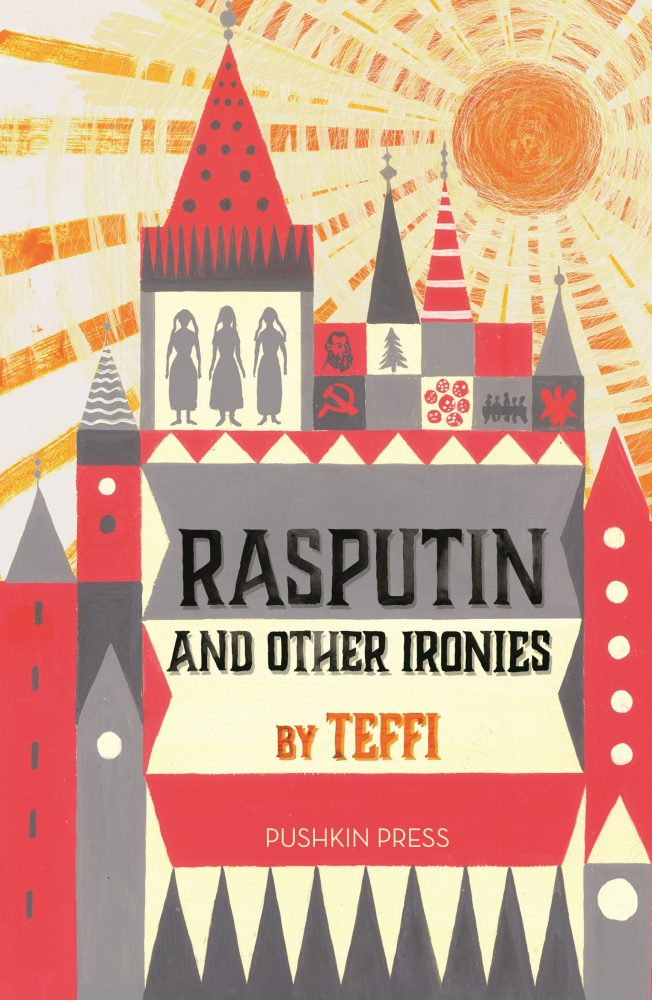 #RivetingReviews: John Munch reviews RASPUTIN AND OTHER IRONIES by Teffi

Teffi. It could be a child’s beloved rubbery chewing gum. Or maybe a name given to some floppy-haired pet. It could never be taken seriously as the pseudonym for a writer who came to prominence in the decades before tsarist Russia descended into cataclysmic revolution, could it? Far too whimsical and tongue in cheek, right?

Wrong. It was in fact a calculated piece of personal cryptography designed to mask the authorial identity and intent of Nadezhda Alexandrovna Lokhvitskaya, which she adopted from 1907, when she was in her thirties. As Robert Chandler, one of the four translators of Teffi’s wide-ranging pot pourri of recollections and reportage, makes clear in his elegant introduction, it was a defensive ploy. It was akin to that of Shakespeare’s Fool – a way of cloaking a penetrating intelligence behind a mask of silliness, the more easily to accumulate and dispense sharp insights about the human condition.

Teffi’s canvas, as demonstrated by this collection, is dizzily far-reaching, ranging from memories of childhood friendships, faltering sorties by the author in search of a publisher for a poem, to gatherings of the bizarre and baroque literary types she met at a radical magazine. But there is one overarching unifier: the focus on individual, small-scale interactions that take place at times when external events can only be measured on a tectonic scale. One critic summed up Teffi’s oeuvre with the verdict that she had “an anarchic irreverence for power, imperial or ecclesiastical”.

Teffi was a poet, journalist, satirist and humorist. Indeed, humour is a frequent visitor to these pages. In “My First Visit to an Editorial Office”, Teffi describes the editor to whom she is offering a poem as a “crook-shouldered, apparently cross-eyed man with a black beard. He seemed very gloomy”. After receiving Teffi’s offering he gave his verdict on the poem in the magazine’s published “post bag”, saying that it had “nothing to recommend it”.

In an office of the Stock Exchange Gazette, an oddly named liberal St Petersburg paper, Teffi describes one woman “who carried grenades around in her muff”. The staff were “captivated by her. She dresses elegantly, she goes to the hairdresser, and all the time she’s carrying bombs”.

There are a number of such laugh-out-loud moments in the collection. What makes Teffi’s achievement so great is that, as a woman humorist, she was the only example in what was otherwise then a male-only comedy enclave. Add to that an economy of expression and clarity to rival that of a fine pen-and-ink artist, it becomes clear why there is, after a long hiatus, an upsurge of interest in her work. She died in 1952 and is buried near Paris where she lived for the last thirty years of her life.

In part her reputational revival can be attributed to Pushkin Press – great enablers when it comes to panning for underappreciated literary gold. The explanatory notes are a model of helpful guidance, and apart from one typographical glitch (referring to the “first word [sic] war”) the production values are spot on.

Rasputin and Other Ironies

Translated from the Russian by Robert Chandler et al