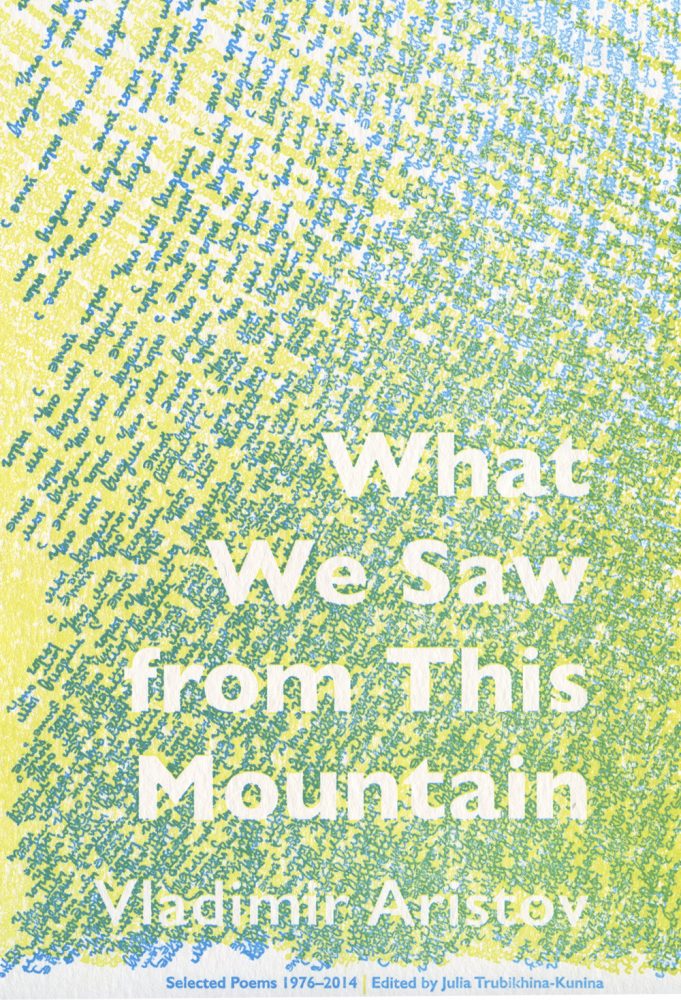 #RivetingReviews: Sasha Dugdale reviews WHAT WE SAW FROM THIS MOUNTAIN by Vladimir Aristov

Julia Trubikhina-Kunina has produced a fine new volume of translations of Vladimir Aristov’s poetry for Ugly Duckling Presse, a small US publisher which is extremely active in the area of contemporary Eastern European poetry.

Aristov is a Moscow poet, born in the 1950s and associated particularly with the “unofficial” poetry of the late Soviet Union. Although he began writing in the 1960s and was an active part of a Moscow poetry scene – performing to small groups at closed readings, his work typed-up and passed from hand to hand – he was only published during the Perestroika era, by which time he was thirty-seven, the age at which Pushkin’s career was over, as Aristov himself points out.

The writers active at this time have been unfairly neglected: sandwiched between the great Soviet poets of the mid-century and contemporary poets, they belong to neither history nor the “now”, their complex circumstances and the “salon” nature of their Soviet reception rendering them apparently inaccessible to a Western reader. Aristov’s work is undeniably complex, even spiky, but it is vital and important, and has an important place in our understanding of both the period and the journey of Russian poetry over the last few decades.

Aristov’s work in this bilingual selection is characterised by a profusion of metaphor and elaborately extended flights of description. In many cases this description is jolting, feeling both unnatural and estranging. The line breaks and the fragmentary layout are also slightly uncomfortable, designed to give the reader a sense of something disjointed, but distinctive and delicate at the same time. The serial nature of the imagery lends the poems a dynamic, almost hurried, quality, as if we need to be quick to keep up. The flashes of lyrical writing, however, show that this is a writer who deliberately suppresses the easy and fluid. The following extract conjures up the Soviet buildings of the Moscow embankment with surprisingly lyrical economy:

And on the crests of fog-shrouded roofs

Beyond the dark river, she saw sentries;

Their stone garlands of wheat

From “The Dolphinarium (A Poem in Fourteen Statements)”

One or two of the poems are long, meditative works. In the haunting ‘A Play’, a fateful meeting between two poets – Akhmatova and Tsvetaeva – is the subject of a play acted out by two actors under the mesmerising direction of a faceless man. It has a dreamy quality and is, unusually, mostly a dialogue in fragments and short cuts:

“Act with your faces alone,

on which eyes and lashes

are not yet painted,

play from blank sheet of the linden tree’s new leaf”

Aristov is a physicist and, in an interview at the end of the book, he nicely describes the way his poetry and physics are interwoven – he calls it “playing several roles” and describes himself as “multiplied” by the experience. We are also treated to his theory of poetics, “idem-forma”, which the editor (and interlocutor) freely admits she doesn’t fully understand. In fact if I had a criticism of this excellent book it would be the insistence on theory. The poems by and large speak for themselves. We read in them a careful observation, a process of serial identification and comparison, a distinctive and compelling way of being in the world. The translations here are accurate, thoughtful and loving. If they do not lift off the page to meet the reader, then this is because Aristov himself does not: instead he invites the reader into a world of imaginative observation and we follow.

What We Saw from This Mountain