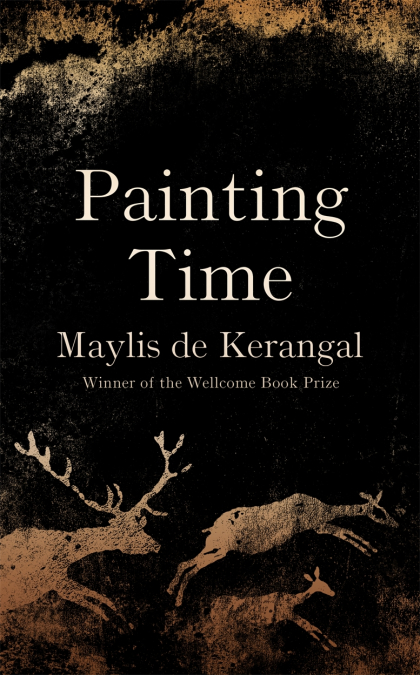 To read Painting Time by Maylis de Kerangal, is to immerse yourself in rich and sometimes obscure language and deep ideas. You may have to keep a dictionary by your side – but it’s worth it, I promise.

Twenty-year-old Paula Karst leaves her family home in Paris to study at the prestigious Institut de Peinture in Brussels, where she learns the art of trompe d’œil, including creating facsimile marble or antique wood surfaces.

On one level it’s a coming-of-age story as, after a few false starts, Paula finds her vocation as a painter. The course in Brussels is just six months and is hard physical work. There’s a rag-bag of students, including the usual, posh history-of-art girls – and Paula, her enigmatic flatmate Jonas and her friend Kate, a tall nightclub bouncer from Glasgow, make an unlikely trio.

The novel asks the question, is trompe d’œil authentic art? Is it possibly forgery? When Paula announces her plans to move to Brussels for this apprenticeship, her father asks: ‘so you are finished being an artist?’ As with her previous novel, The Cook, de Kerangal’s story is suffused with the joy and meaning of working with our hands: ‘They’ve learned to glaze, to score, to soften, to stipple, to moiré, to lighten, to create a little iridescence with a polecat-hair round brush.’ This sumptuous writing is occasionally juxtaposed with chatty lines from a mysterious narrator that draw the reader in: ‘Now let’s talk a little bit about the rue de Métal.’

The structure of and craft involved in Painting Time reflects the students’ painstaking work, as they use their imaginations, unwilling simply to reproduce. There is such a variety of language in this book (‘karst’, for example, is a geological term for wild terrain full of ravines and streams – and resonates later in the novel), that I’m full of admiration for the translator, Jessica Moore. The lists of colours that ignite stream-of-consciousness passages are particularly gorgeous: ‘nacarat, Great Maiden’s Blush, paprika, Naples-yellow, after-the-rain green, pomelo.’

Years later the three friends meet up in Paris. After a spell at Rome’s Cinecittà studios, where she’s learned to create true, if not real film sets, Paula arrives hot foot from a Moscow drama production where she has led a team recreating the wood panelling of Anna Karenina’s sitting room. Meanwhile Kate is decorating the hallway in a Parisian house in fake marble. Jonas, Paula’s on-off lover, is now pursuing his own original artistic endeavours.

Towards the end of the novel, as Paula goes back to the very origins of art by reproducing the prehistoric cave drawings at Lascaux, the writing becomes more like reportage, with the fascinating story of the discovery of the drawings by four teenage boys in 1940, before taking a startling and sensual turn.

Maylis de Kerangal won the Wellcome Book Prize 2017 for Mend the Living – about the sudden death of a young man and how his heart is used for organ donation. The ateliers and prehistoric caves of Painting Time are a world away from that novel, but both show the author’s impressive imagination and philosophical love for what it means to be human.

Dymphna Flynn reviews books for BBC Sussex & Surrey and blogs about books on Instagram @dymphnaflynn Dymphna was a books producer at BBC Arts for over 20 years, and has a degree in French and Italian.