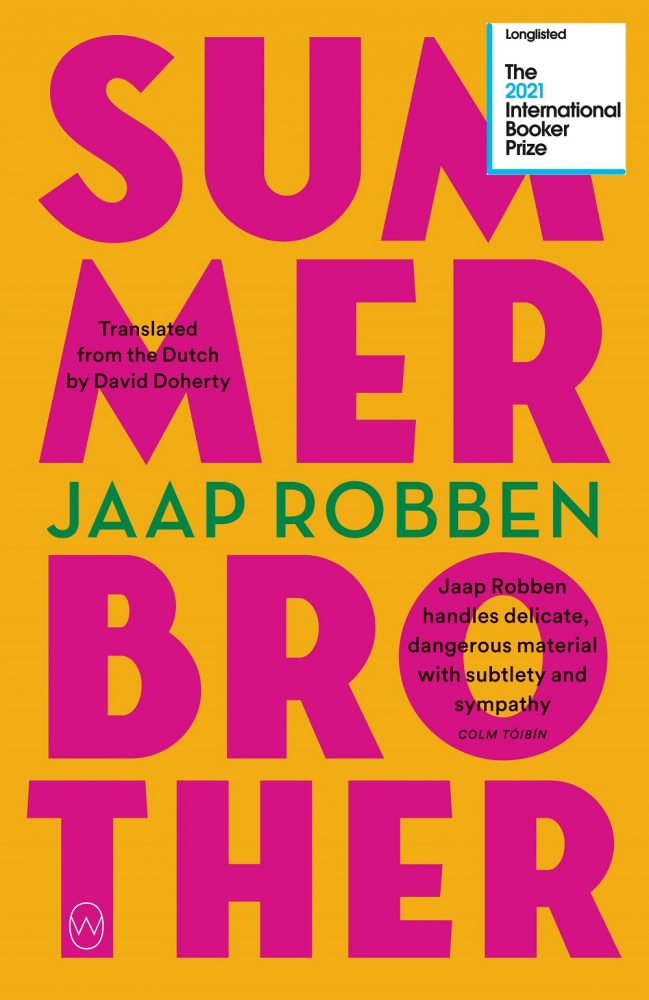 ‘My big brother lives in a bed half an hour’s drive from our caravan.’

It’s a hot, dry summer somewhere in France. Thirteen-year-old Brian and his wheeler-dealer father, Maurice, are struggling to make ends meet. Brian’s older brother Lucien is bed-bound and lives in a care home, born disabled because something went wrong when he was still inside his Mum’s belly. When renovations at the care home mean Lucien needs somewhere to stay, Maurice jumps at the chance to earn some cash by taking him in. How hard could it be to care for Lucien in their dingy caravan on an abandoned scrapyard for a week or two?

Summer Brother draws us into Brian’s world as he’s left to watch over his sixteen-year-old brother, changing nappies, counting pills, and trying to get him on his feet. It’s a man’s world, and tensions are high. Menacing landlords Jean and Henri are constantly on Maurice’s back about unpaid rent. The mysterious new tenant, Emile, raises Maurice’s suspicions as he builds up a rapport with Brian when Maurice isn’t around. And an unusual love triangle simmers beneath the surface as Brian is drawn to Selma, a nineteen-year-old care-home resident who bounded into Lucien’s room one day when Brian was visiting.

We meet Brian’s mother through flashbacks. With mixed emotions, Brian remembers tough times when the family was still together. He recalls later visits to the care home and his mother’s ultimate refusal to visit Lucien. Now on honeymoon with a new husband, Brian’s mother only appears through phone calls to the care home, protesting that Brian and his father are unfit to care for Lucien.

Much acclaimed as a children’s writer, Jaap Robben is now establishing himself as a writer of adult fiction. Summer Brother is his second novel for adults, following his award-winning debut, You Have Me To Love. Like other contemporary Dutch-language writers, such as Marieke Lucas Rijneveld and Lize Spit, Robben does not shy away from exploring the darker aspects of teenagers left to their own devices in isolated places. Brian’s infatuation with Selma, for example, prompts him to leave Lucien tied to his bed in the caravan while he jumps on his scooter to sneak back into the care home, ever more eager to explore ‘belly belly’ with a girl ‘you can’t cuddle because she’ll leave a stain and everyone will know what you’ve been up to’.

The threatening atmosphere on the desolate site around the caravan heightens as the story develops, reflected in the ominous presence of the dogs, kept in a cage and fed roadkill from the freezer. A violent climax brings the novel to a startling conclusion, adding yet another layer to the complicated relationships between Brian, Lucien, and Maurice.

The short chapters and strong dialogue – masterfully recreated in David Doherty’s pitch-perfect translation, which carefully captures and conveys the rough-and-ready characters and their volatile emotions – make Summer Brother a fast-paced read as it explores the tensions in a family living with a child with disabilities.

Johanna McCalmont is a Northern Irish translator and interpreter based in Brussels where she works from French, German, Dutch, and Italian. Read more about her work here and follow her on Twitter @jo_mccalmont.