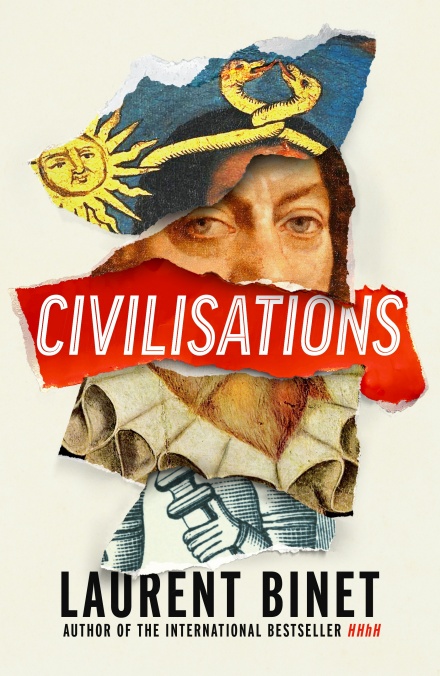 French writer Laurent Binet’s new novel, Civilisations is fictional history, turning true events upside down. What if a group of Vikings lands in North America and makes it as far as Panama? They bring horses and diseases, but the indigenous peoples develop immunity which will help their descendants centuries later. And then, what if 500 years later, Columbus’ voyage of 1492 is unsuccessful, and Ferdinand and Isabella send no more explorers after him?

‘History has taught us that few events bother announcing their arrival in advance, a number enjoy eluding all attempts at prediction, while most are content simply to happen.’

Wonderfully translated by Sam Taylor, the novel is a historical romp written at times with an ironic tone and hysterically funny ideas and episodes.

Written in four parts, the first is a spoof of a Norse myth telling the story of Erik the Red’s daughter and that Viking voyage; the second takes the form of the haughty and superior diaries of the entitled Columbus, who is so daft he doesn’t realise he’s been taken captive, and meets a sorry end.

The third and main part is the story of the great Inca leader Atahualpa, who in our world was taken hostage by the Spaniard Pizarro and just 200 men, and Pizarro used him to control the Inca Empire. In Civilisations Atahulapa escapes civil war at home by repairing Columbus’ abandoned ships and travelling to Lisbon, again with just 200 men; he captures the Spanish monarch Charles Quint, and gradually gains control of his empire.

The novel is at times so convincing that I nearly believed that Titian had painted a scene of a great meeting between Atahualpa, his entourage and Spanish dignitaries. Less convincing, but hugely entertaining, is Henry VIII converting to the new religion brought from ‘The Old World’. He decides he is, like Atahualpa, Son of the Sun God and destroys the monasteries and fills them with Vestal Virgins. Another deliberately funny idea is a later Aztec invasion of France leading to the erection of a sacrificial pyramid in the courtyard of the Louvre.

Binet has said that he was interested in how Pizarro could conquer a whole Empire with just two hundred men. The novel abounds with ideas of colonialization, diplomacy, power-grabbing, even serfdom (which the Inca lords dismantle). The fictional Atahualpa is influenced by Machiavelli as he spreads his tentacles of power, overwhelming the chaotic nations of Europe because they are at war with each other, Charles Quint of Spain with Francis I of France, who in turn is at war with Henry VIII. This mirrors the way the conquistadors took advantage of the vulnerable, warring  tribes of the Americas. Atahualpa makes allies with the French to overcome Spain, just as Cortes made allies with the Aztecs to overcome the Incas.

You don’t need the requisite knowledge to appreciate Civilisations as an alternative history, though a little googling helped me along the way. It’s a great story with brilliantly drawn characters, notably  Atahualpa and his right hand woman Higuénamota who turns out to be a powerful and skilled diplomat, with her nakedness and her bat-skinned coat.

The book ends, slightly oddly, with a short story about Cervantes and this section feels like an unnecessary addition to a perfectly formed novel.

I’ve seen Civilisations on lists for recommended summer reading – if you like your beach reading to stretch your imagination and entertain, this is for you.

translated from the French by Sam Taylor

Dymphna Flynn is a judge on the Costa Book Awards (First Novel) 2021. She reviews books for BBC Sussex & Surrey and on Instagram @dymphnaflynn. Dymphna was a books producer at BBC Arts for over 20 years, and has a degree in French and Italian.