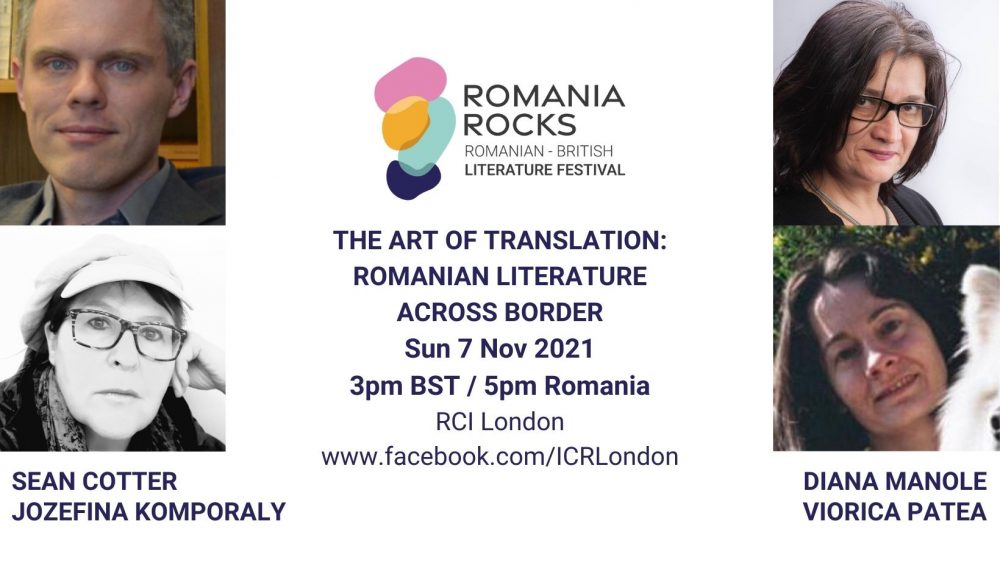 For the second edition of the Romania Rocks Festival, celebrated translators Sean Cotter, Jozefina Komporaly, Diana Manole and Viorica Patea meet to discuss their work and future projects. Curated and hosted by cultural entrepreneur and creative producer Gabriela Mocan, the event will feature readings from a wide range of genres including poetry, drama and prose. A real treat for eager literary taste buds.

Bucharest-born Diana Manole emigrated to Canada in 2000. An award-winning Romanian-Canadian scholar, writer, and literary translator, she holds a PhD from the University of Toronto and has been teaching at Canadian universities since 2006. In Romania, she has published nine collections of poetry, short fiction, and plays, and won 14 literary awards. Her recent poetry was published in English across America, Europe and Asia. She has also translated or co-translated seven poetry collections into/from English and co-won 2nd prize in the 2018 John Dryden Translation Competition. Dr. Manole has also independently translated numerous poems and three docu-dramas about the rights of Roma women in Romania, “Del Duma – Tell Them About Me” by Mihaela Drăgan (2019), “Who Killed Szomna Grancsa? by Mihai Lukacs and Giuvlipen Theatre (2021), and “Bambina” by Zita Moldovan, Andrei Șerban, and Alexandru Fifea, all translations being commissioned by the Independent Theater Hungary and Women for the Future Association in Budapest, Hungary for the anthologies Roma Heroes (2019 and 2021).

Sean Cotter is an award-winning translator of Romanian literature and an academic specializing in translation, comparative literature and modernism. Winner of the Best Translated Book Award and two National Endowment for the Arts Translation Fellowships, his recent translations include: Mircea Cărtărescu’s Blinding (Archipelago Books, 2013), T. O. Bobe’s Curl (Wakefield, 2019), Magda Cârneci’s FEM (Deep Vellum, 2021), Mateiu Caragiale’s Rakes of the Old Court (Northwestern University Press, 2021) and Mircea Cărtărescu’s Solenoid (forthcoming from Deep Vellum, 2022). His study, Literary Translation and the Idea of a Minor Romania, won the Society for Romanian Studies Biennial Book Prize. He is Professor of Literature and Translation Studies at the University of Texas at Dallas.

Jozefina Komporaly lectures at the University of the Arts London and translates from Romanian and Hungarian into English. She is editor and co-translator of the drama collections Matéi Visniec: How to Explain the History of Communism to Mental Patients and Other Plays (Seagull Books, 2015) and András Visky’s Barrack Dramaturgy: Memories of the Body (Intellect, 2017). She is author of numerous publications on drama and performance, including essays on Romanian theatre for Routledge and the monographs Staging Motherhood and Radical Revival as Adaptation (Palgrave). Her stage translations were produced by Foreign Affairs (London), Trap Door and Theatre Y (Chicago), Trafika Europe Radio. Her recently translated work includes two volumes of essays on directing by Mihai Măniuţiu (co-translated with Nicoleta Cinpoeş) and the novel Mr K Released by Matéi Visniec (Seagull, 2020 – shortlisted for the 2021 EBRD Literature Prize). Her latest publication is the critical anthology Plays from Romanian: Dramaturgies of Subversion (Bloomsbury, 2021). She is a member of the UK’s Translators’ Association.

Viorica Patea is Professor of American Literature at the University of Salamanca, where she teaches twentieth-century American poetry and nineteenth-century English literature. She has published critical studies of Sylvia Plath (1989), Walt Witman (1999) and T.S. Eliot’s The Waste Land (2005), as well as comparative studies in the ‘witness literature’ of East European countries. She has edited, translated into Spanish and analysed the work of Nicolae Steinhardt (2007) and Ana Blandiana (2008, 2011). She has edited various collections of essays, including Modernism Revisited: Transgressing Boundaries and Strategies of Renewal in American Poetry (Rodopi, 2007), together with Paul Scott Derrick. Her most recent publication is Short Story Theories: A Twenty-First-Century Perspective (Rodopi 2012), which received the Javier Coy Research Award for the best edited book (2013) from the Spanish Association of American Studies. She is also co-translator, with Paul Scott Derrick, of all of Ana Blandiana’s poetry, most of which already published in the UK by Bloodaxe: My Native Land A4 (2014), The Sun of Hereafter / Ebb of the Senses (2017) and Five Books (2021).

Gabriela Mocan is a cultural entrepreneur and creative producer, whose proven track record in the fields of cultural diplomacy and arts management includes award-winning exhibitions (e.g. London Fashion Week), groundbreaking literary events and numerous other successful projects, most of which developed in the UK and Romania. She was the Creative Producer and Co-Curator of the Romania Rocks Festival, the first Romanian-British literature festival ever organised in the UK, which took place online in October-November 2020. Between 2013 and 2019, Gabriela was Head of Literature, Visual Arts, Architecture and Design at the Romanian Cultural Institute in London, also leading the organisation’s PR & Communications. She holds a doctoral degree in Cultural Studies/Philology from the “Babeş-Bolyai” University in Cluj-Napoca (Romania), where she is currently lecturing in English for Business and Intercultural Communication, while furthering her work as a translator and editor. As guest editor of The Romanian Riveter magazine, her contribution was significant towards the first issue of a British literary magazine dedicated entirely to Romania. Her creative work also includes, among others, collaborations with contemporary art spaces (Centrul de Interes Cluj, Spațiu Intact), cultural organizations & festivals (British Council, London Festival of Architecture) and well-known publications (Tribuna, a bimonthly cultural magazine), and her poetry has been published in various literary journals in Romania and the UK.