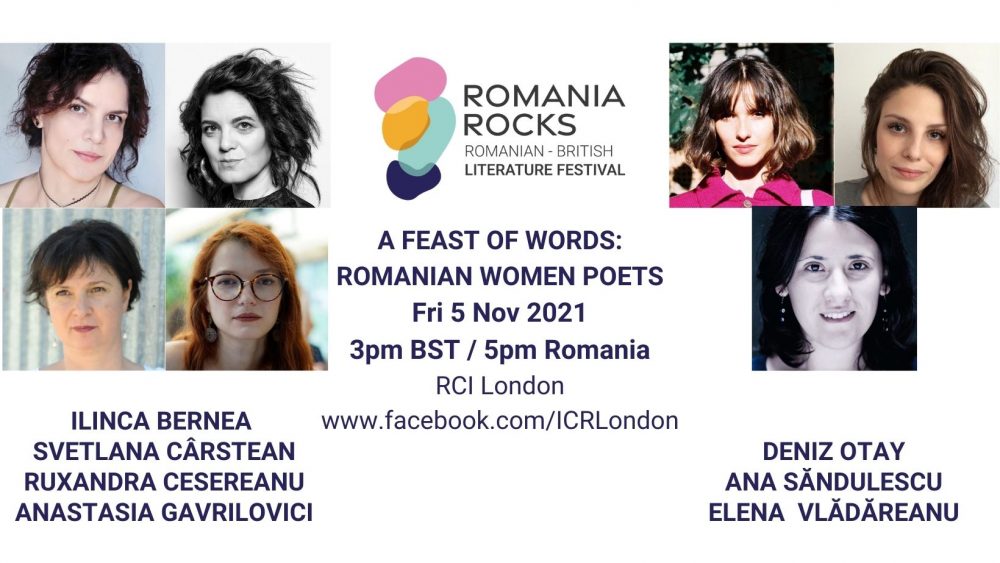 A novelist and a poet, Ilinca Bernea has also written theatre plays and film scripts. She has a PhD in Philosophy and is a graduate of the Theatre and Film University in Bucharest. Ilinca is also a visual artist and has participated in national and international exhibitions. She is Romanian Writers’ Union prize winner. She has taught at universities in Bucharest. She is specialized in the field of art theory and curatorship, is also an art reviewer and critic for Liternet Magazine, where she also writes a regular poetry column. She has directed various poetry and theatre performances. Among her literary publications are the novels Numele tău și alte erezii (Your Name and Other Heresies; 2017, Polirom), Cutia Neagră (The Black Box; 2015, Timpul), Legende Androgine (Androginous Legends; 2004, Cartea Românească); the prose volume Iubiri în cămașa de forță (Love in a Straitjacket; 2003, Cartea Românească), and the poetry collection Piatra Erotica (Erotic Stone; 2003, Vinea).

Svetlana Cârstean is a writer, journalist, translator, and cultural manager. She published her first poems in 1995, in the collective volume Tablou de familie (Family Picture) – in an anthology inspired and introduced by Mircea Cărtărescu. Her debut poetry collection was Floarea de menghină (Vise Flower, 2008), which was awarded several important national prizes. Since then, her poetry collections – Gravitație (Gravity; 2015, Trei) and Trado, co-written with Athena Farrokhzad (2016, Nemira) – were received to wide acclaim and published in Sweden, Norway, Denmark and Poland. In January 2021, Svetlana Cârstean unveiled a new verse novel, Sînt alta (I Am Another), which was unanimously praised both by readers and critics. Svetlana has taken part in various international poetry festivals, poetry translation workshops and book fairs across Europe; she has held public readings worldwide and her poems have been translated into several languages. She runs the poetry collection, Vorpal, at Nemira Publishing House, where she curates the work of both debut and well-established poets. She is widely known as a cultural events manager, for example, Intersecțiile de miercuri (Wednesday’s Crossroads), which is a series of weekly dialogues with influential Romanian and international figures.

Over the last two decades, Ruxandra Cesereanu has established herself as an important Romanian poet and prose writer, and been awarded a number of literary honours. She is Professor at the Faculty of Letters (Department of Comparative Literature) in Cluj, member of the Centre for Imagination Studies (Phantasma) and director of Creative Writing Workshops on poetry, prose and screen-writing. Cesereanu’s prolific literary achievements include eight books of poetry, with California (pe Somes) (California (upon Somesh; 2014, Charmides) and Scrisoare către un prieten și înapoi către țară (Letter to a friend and back to the country; 2018 & 2019, Paralela 45) to name just two. She also co-authored a pair of experimental works: Submarinul iertat (The Forgiven Submarine, with Andrei Codrescu; 2007, Brumar), translated in English in 2009 by Andrei Codrescu (Black Widow Press); and Tinutul Celalalt (The Otherland, with Marius Conkan; 2011, Cartea Romaneasca). Three books of Cesereanu’s poetry have been published in English: Schizoid Ocean, Lunacies and Crusader-Woman. She also compiled Moods & Women & Men & Once Again Moods – An Anthology of Contemporary Romanian Erotic Poetry (Tracus Arte & Calypso Publishing House, 2015). Ruxandra Cesereanu’s latest volume of poetry, Sophia România, was published this year by Max Blecher Publishing House.

Anastasia Gavrilovici graduated from the Faculty of Letters of the University of Bucharest and the Center of Excellence in Image Study, where she is currently doing her PhD. She has published poems and articles in several literary magazines and anthologies and has also contributed to a number of cultural publications in Romania, including Observator cultural, Timpul, Zona Nouă and Alecart. She is a member of the Poesis International editorial board and translates literature from English, French and Spanish. Her first poetry book, Industria liniștirii adulților (The Industry of Comforting Adults; 2019, Max Blecher Publishing House), has won the “Mihai Eminescu” National Poetry Award, the Young Writer of the Year Award (Poetry category) and the Observator Cultural Award, among others.

A graduate of the Law School in Cluj, Deniz Otay currently lives in Bucharest. Her poetry has been published in various Romanian literary magazines, such as Zona Nouă, Poesis Internațional, Steaua, Scena9 and, in 2020, she published Fotocrom Paradis (OMG Publishing), her first poetry book, which received wide acclaim from critics and readers, winning her two of the most important literary prizes in Romania: the Mihai Eminescu Literary Award for debut poetry and the Sofia Nădejde Literary Award for Literature Written by Women. Fotocrom Paradis, is a candid and powerful look at the fragile psychological underside of party people and modern life.

Ana Săndulescu has published fiction, poetry and non-fiction in various leading Romanian literary magazines and online literary platforms. In 2015, she published her first novel, Anamneza (Herg Benet Publishers, Bucharest). In 2017, she was part of the ‘FILIT Residences for Romanian Writers’ Programme and, in 2018, she translated, from English to Romanian, the novel Into the Darkest Corner by Elizabeth Haynes. In 2019, she released a book of interviews, Friendship and Literature. Her latest project, When Glaciers Melt, marks her debut in poetry. Ana Săndulescu lives and works in Bucharest.

A graduate of the Faculty of Letters in Bucharest and the Centre for Excellence in Image Research (MA in Performance, Multimedia and Society), Elena Vlădăreanu is currently doing her PhD research on biography and autobiography in contemporary theatre. She published her first book of poetry Pagini (Pages), in 2002, followed by several volumes of poetry, including: Spaţiu privat. A handbook (Cartea Românească, 2009, with drawings by Dan Perjovschi), Bani. Muncă. Timp liber (Nemira, 2017) and Minunata lume Disney (Nemira, 2019). In 2021, she published her first collection of short stories, August. Elena is interested in creating poetry with a variety of other media and involving and questioning both politics and the human body. Her poems have been published in several international anthologies, such as Die Spitzen-Elf (2018, Germany), The Vanishing Point That Whistles. An Anthology of Contemporary Romanian Poetry (2011, USA), No Longer Poetry. New Romanian Poetry (2007, UK).

Gabriela Mocan is a cultural entrepreneur and creative producer, whose proven track record in the fields of cultural diplomacy and arts management includes award-winning exhibitions (e.g. London Fashion Week), groundbreaking literary events and numerous other successful projects, most of which developed in the UK and Romania. She was the Creative Producer and Co-Curator of the Romania Rocks Festival, the first Romanian-British literature festival ever organised in the UK, which took place online in October-November 2020. Between 2013 and 2019, Gabriela was Head of Literature, Visual Arts, Architecture and Design at the Romanian Cultural Institute in London, also leading the organisation’s PR & Communications. She holds a doctoral degree in Cultural Studies/Philology from the “Babeş-Bolyai” University in Cluj-Napoca (Romania), where she is currently lecturing in English for Business and Intercultural Communication, while furthering her work as a translator and editor. As guest editor of The Romanian Riveter magazine, her contribution was significant towards the first issue of a British literary magazine dedicated entirely to Romania. Her creative work also includes, among others, collaborations with contemporary art spaces (Centrul de Interes Cluj, Spațiu Intact), cultural organizations & festivals (British Council, London Festival of Architecture) and well-known publications (Tribuna, a bimonthly cultural magazine), and her poetry has been published in various literary journals in Romania and the UK.