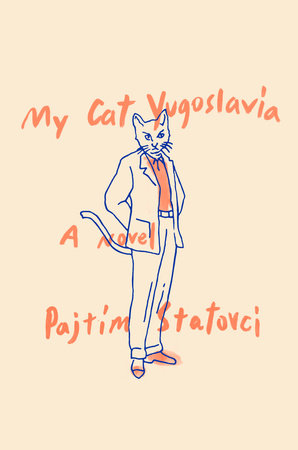 Based on a brief description of the plot, you could be forgiven for mistaking Pajtim Statovci’s debut novel, My Cat Yugoslavia, for a whimsical, feel-good fairy tale full of talking cats, fateful encounters and adventures in new and exciting places. The novel moves between the story of Bekim, a Kosovo-born immigrant to Finland, who meets a talking cat in a bar one night, and that of his mother, Emine, who, as a young Muslim girl in 1980s Kosovo, takes part in an arranged marriage to Bajram, a man she believes will provide her with wealth, happiness and stability.

Unfortunately for Bekim, the cat is racist, homophobic and obnoxious, dismissive of his ambitions and interests, as well as insulting, demanding and greedy. Emine, for her part, discovers Bajram to be physically and emotionally abusive. Furthermore, the stability she craves is destroyed by the outbreak of civil war in Kosovo, resulting in the family’s escape to Finland. Any illusion of a fairy tale is thus quickly destroyed and the novel soon shows itself to be a sharp criticism of the refugee experience in modern-day Finland. “When are immigrants going to get off their asses and do something?” Bekim hears Finnish people asking. “When are they going to stop shafting the welfare system, lazing about and harassing women? Sure, they’re not all the same. Like you, I mean, you’re an exception, you’re just the kind of immigrant we welcome here. But most of them.”

Although the genre-bending nature of the novel can be grating at times, this is only to the credit of Statovci’s writing: just as the novel doesn’t fit any particular genre, so Bekim and his family move from place to place without truly fitting in anywhere. The animals in the novel – namely cats and snakes – also paint a picture of loneliness, misunderstanding and isolation. As a child, Bekim is terrified of snakes, to the point of needing therapeutic intervention without knowing why. As an adult, he buys a boa constrictor, which proves to be pretty harmless, yet he notices how people are frightened of it based on their preconceptions of such animals. The talking cat exudes a stereotypical feline standoffishness, yet the friendly, gentle cat Bekim discovers in Albania is shunned, cats there being viewed as symbols of evil. The fact that the stereotypical, hate-filled talking cat is the most fantastical element of this otherwise realistic novel makes a point that is not to be ignored.

My Cat Yugoslavia is a smart, fresh and ultimately important novel, particularly in today’s fraught political climate. The poor treatment of Bekim and his family and their sense of alienation are not confined to Kosovo-born immigrants to Finland in the 1990s. As a result, Statovci has managed to capture the prevalent societal attitudes towards modern-day immigrants despite writing about a war that happened two decades ago. In a world in the midst of an immigrant crisis and where empathy seems to be slowly disintegrating, this novel makes for essential reading.

Rachel Rankin is a postgraduate tutor in Scandinavian Literature within the Scandinavian Studies  departmentof the University of Edinburgh. She reviews literary fiction for Gutter magazine and has been  mentored by the Scottish Review of Books.