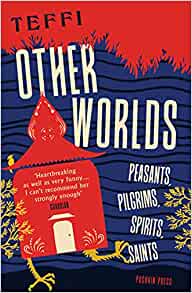 My Russian-bred grandmother’s favourite adjective for describing a writer she truly admired was остроу́мный [ostro-úmny]. It was the highest compliment in her register. The dictionary translates this as witty, but somehow, at least in my mind, it doesn’t convey the meaning of the original Russian fully. Witty, for me, evokes a quick, clever, often humorous remark or retort: Oscar Wilde, S.J. Perelman, Tom Lehrer, Dorothy Parker. Ostro-úmny – literally ‘sharply intelligent’ – suggests something even subtler, lighter, more elegant. And it’s this concept that immediately leaps into my mind when I read anything by Teffi.

Nadezhda Alexandrovna Lokhvitskaya (1872-1952), who wrote under the pseudonym Teffi, made a name for herself in pre-Revolutionary St Petersburg as a poet, novelist, satirist and wit, though she is best known for her exquisite short stories, three collections of which have already been brought to us in English (Subtly Worded, Memories: From Moscow to the Black Sea and Rasputin and Other Ironies) thanks to the dedication and talent of translator Robert Chandler and his team. At first a passionate supporter of the October Revolution, Teffi soon grew disillusioned with the Bolshevik movement and eventually, in 1919, emigrated to Paris, where she became a prominent figure on the Russian émigré literary scene and spent the rest of her life.

Other Worlds: Peasants, Pilgrims, Spirits, Saints is very different from Robert Chandler’s previous short-story collections. As the title suggests, its leitmotiv is belief in its many forms, be it religion, prejudice or superstition. Here, we are far removed from the effervescent salons of St Petersburg or the literary circles of Paris. Instead, we are plunged into a world where all experiences are ultimately filtered through the language of the soul – or whatever one chooses to call the dimension our brain cannot yet fully translate. Reality is a shapeshifter at the service of social, cultural and religious traditions, so much so that we start to suspect that reality as we know it as an objectively defined concept may in fact be an illusion or at best a chimera. A state if not created then at least viewed through the dictionary-like process of our brain.

In ‘Kishmish’, the first story in this collection, an eight-year-old girl aspires to distinguish herself and considers various routes to fame. She could become a strongman or a brigand or, even better, an executioner – or perhaps a terrifying monster? After some internal debating, Kishmish decides to become a saint. And how does one become a saint without disobeying one’s mother and upsetting the household too much? To say that the story is delightful would be an understatement. ‘Kishmish’ is a uniquely perceptive observation of an over-thinking child’s honest inner dialogue in an adult world that learns to self-censure and eventually forget. The story made me laugh, of course, but Teffi seems to use humour to make a stark message more palatable: beware, adults, of losing a child’s candid self-awareness. In ‘Confession’, we see this self-awareness already being muddied in the first-person narrator, whom we imagine to be a slightly older girl. She is tempted by her Nyanya’s bun, eats it, then blames the theft on the house spirit:

‘The theft had come about almost of itself. I happened to go up to Nyanya’s windowsill and catch sight of a round bun, a vatrushka. One side of it was oozing jam. I wanted to check whether or not the jam went all the way through. So I inspected it. By the time the inspection was over and I’d come to a definite conclusion, there was only a tiny morsel of bun left – so tiny that leaving it on the windowsill would have looked positively unseemly. I had no choice but to finish it.’

A beautifully observed example of the self-lying process. There are echoes of Jean-Jacques Rousseau justifying stealing the ribbon of the mistress of the house in his Confessions. Only it’s hard to feel anything but contempt for Rousseau’s cowardice, while one’s heart goes out to Teffi’s narrator because as the story progresses, the inner struggle between her self-deception and her conscience is so powerful that we can all deeply relate to it. Again, Teffi seems to urge us, if lying to others, to at least be true to ourselves.

In ‘Confession’, the narrator’s tears are her body, rejecting the lie inside her. Similarly, in ‘Solovki’, in which a man drags his wife to a monastery so she may do penance for allegedly committing adultery, we see the woman’s body finally take over and express her pressure, frustration and despair when society and her husband will not permit her to do so in words:

‘[…] she felt her legs and shoulders begin to shudder, swiftly, violently, while her whole face stretched as if clinging tight to her cheekbones, and her stomach swelled, climbing right up to her throat, and a wild scream flew out of somewhere deep and dark, twisting her whole body, tearing her body apart, smashing red lights against the crown of her head […]’

‘Other Worlds’ also introduces us to the world of Russian spirits and other non-physical entities – although these often have a very physical impact on everyday human life. The domovoy in ‘The House Spirit’ plays tricks: he hides cotton spools out of sight, blows smoke from the chimney back into the room and lets out loud sighs at night. ‘Leshachikha’ is a female forest spirit, represented in this story by a wayward adolescent girl with a strange, eerie bond with her father. The bathhouse devil, in the story of the same title, is used as a cover-up for a husband’s indiscretion, and in ‘Rusalka’, a woman is branded as a water spirit so that her community can be entitled to shun her and drive her to tragedy. We also have shapeshifters, a man who comes to save his beloved in the guise of a dog, and demoniacal forces are blamed for a heartbreaking case of plain antisemitism in ‘The Kind That Walk’.

The penultimate story in this collection gives us a brilliant new insight into a character without whom Russian fairy tales would be the poorer: Baba Yagá. Here, she is not the terrifying, deformed woman who lives ‘on the edge of the forest, in a windowless, doorless hut standing on chicken legs’, but ‘the goddess of whirlwinds and snowstorms’, the woman every hero and heroine feels entitled to lie to and use without a scruple. Spring makes her anxious: it’s the mating season for animals and humans alike. She hates summer: all that life bursting in your face. Seasons for those who fit in and that only make those who are different feel even more so, even lonelier. At the first snowflakes, in the autumn, Baba Yagá feels more in her element, and so her hopes perk up. She sings, whirls and dances with a scarecrow, but even he doesn’t want her.

‘Baba Yaga howls and weeps. On she whirls, crazed and vicious. Roaming the fields and valleys again, looking for someone new to torment.’

Her cruelty is the manifestation of her loneliness, of her being a goddess misunderstood, consigned to children’s nightmares, type-cast without a chance of appeal. So the only way she can exist is to be as she is seen by others. Without that, she would not be seen at all. Again, Teffi warns us against prejudice and unforgiveness by giving this dreaded character a backstory. You can’t ever hate anyone if you know their backstory.

Teffi’s ostro-úmye, her sharp intelligence, gives every story an undertone of wisdom, every character the compassion of the self-aware sinner who knows they may laugh at others, cry over them, denounce them even – but never, ever condemn them. Her subtlety is handled with great sensitivity and grace by Robert Chandler and all the translators who crafted this English version. The language sounds like a seamless extension of the original Russian; everything is conveyed so faithfully to the spirit of the writings that we are not just easily immersed into that world, we end up feeling at home in it.

You can read Katherine’s interview with translator Robert Chandler here.