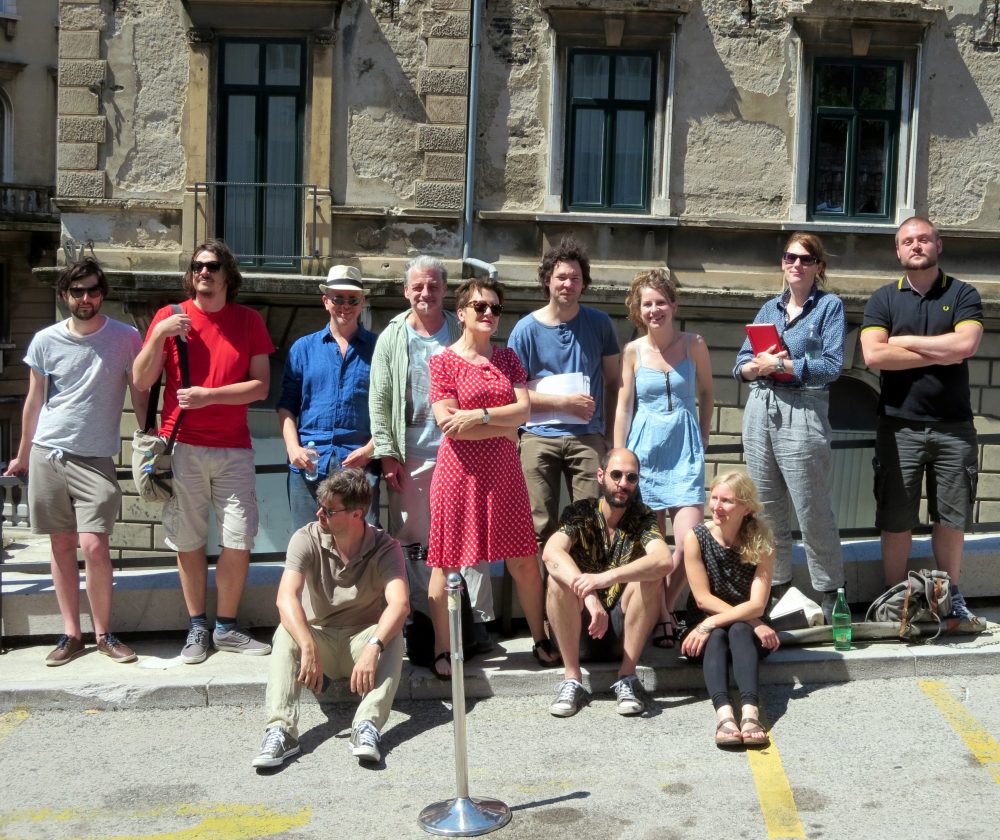 A year after the (disastrous, misguided, heartbreaking) UK Referendum decision on Brexit, it’s time for some good news.

It’s very easy to be positive about Europe here in Croatia, when the sky and sea are turquoise blue, the sun is hot and bouncing off the white stone walls, and when you are surrounded by superb writers, publishers and editors from the UK and Croatia, excelling through their luminous prose, wit and warmth. The author Robert Perisic and author-publisher Ivan Srsen have been running the Croatian LitLink Roadshow for five years, inviting equal numbers of writers from Croatia and A Guest Country (this year, poor Blighted Britain) to travel together round the country, to debate, walk, eat, drink and hold public readings in unusual venues. My favourite, the Planetarium in Rijeka (‘stars on stage, stars in the sky’?).

Was it a provocation or a kindness on Robert’s and Ivan’s part to give this year’s festival the theme ‘Despite Brexit’? Today, at the close of the trip, I can only report that the Croats weren’t much interested in Brexit and the Brits were delighted to escape the awful reality ‘back home’. After years of civil war and divisive nationalisms in the former Yugoslavia, Croatia is today proud to be an EU Member and simply cannot understand how Britain could contemplate leaving. The success of the three-day-LitLinking of Europeans, sharing our literatures and languages, proves beyond measure that the sun still shines and the stars still twinkle ‘Despite Brexit’.

Ivan Srsen and I will be creating a special online ‘goodie-bag’ for you soon of all the LitLink readings and translations (Croatian and British) and my photos of the Zagreb-Pula-Rijeka-Zagreb Roadshow. (A few photos attached to entice you.) You’ll meet Croatia’s best writers, as well as the four outstanding UK authors Joanna Kavenna, David Szalay, Samantha Harvey and Gary Budden, and their backing group of UK editor-publishers Anna Kelly, Mitch Albert and Nathan Connolly.

I was invited to participate in LitLink as a journalist and director of the European Literature Network. But this trip is significant for me for an additional reason: it is my first trip back in Croatia since I was here for the BBC at the end of the Yugoslav Wars, just over twenty years ago. A harrowing time and as life-changing for me as the fall of the Berlin Wall in 1989, when I first joined the BBC. For the past few days I’ve been walking around Zagreb, Pula and Rijeka in a daze, trying to absorb all the changes, fanatically photographing everything and everyone. Perhaps I’ll write more about my ‘Before- and After-Life’ at some point but for the moment all I can say is that what’s happening today in all these brave, bright countries of the former Yugoslavia is a slow-burning miracle. And here we are, translating, publishing and reading each other’s books, slowly boosting the statistics of translated fiction, attending each other’s events and festivals. I have a feeling that we will all be ok ‘Despite Brexit’ – by defying Brexit.

Don’t forget to send in your own July-August dates and events to add to our calendar.

Don’t forget our Russian Riveter magazine. The deadline for your riveting reads and reviews is July 10th; publication August 3rd.

Enjoy your summers and we’ll be back in September, working towards the next ELNet Meeting on 9th October and our Nordic events plus Nordic Riveter magazine on October 18th.