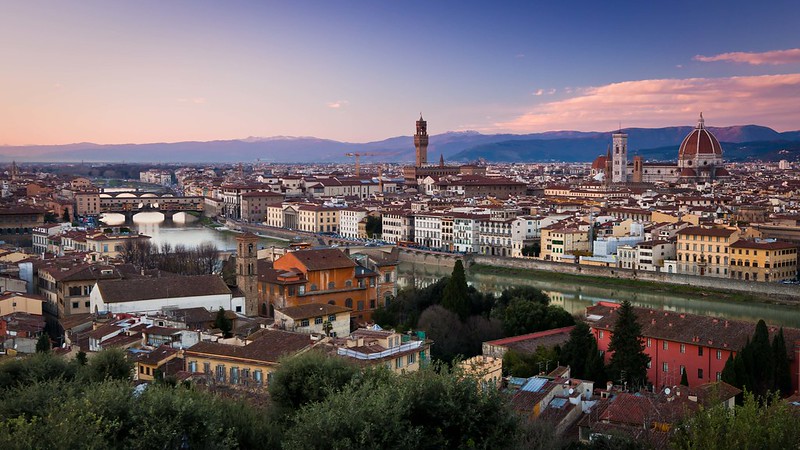 The Secret Bakeries of Florence by Baret Magarian

If you have ever found yourself wandering round the Old Town of Florence in the small hours of the night and detected a delicious aroma emanating from some unidentifiable source in an obscure backstreet, you should know that you have just taken your first step into the world of secret Florence. By secret Florence I don’t mean anything as sinister as freemasonry or esoteric practices in the occult. The city has a side to it that isn’t found in the pages of travel guides or gushed about by travellers succumbing to Stendhal Syndrome. Those nocturnal fragrances refer to the unofficial bakeries of Florence – if you know where to find them, after a night of eating and drinking. These little spots are where the croissants, cornettos and other tempting breakfast delights are baked and they are unofficially open to the occasional customer who, in the manner of someone gingerly offering a bribe, proffers cash and purchases a pastry as fresh as dew, as yet untainted by the atrophy that later sets in as the day gets into its stride.

Now that the pandemic has finally lifted and Florence is no longer the empty, abandoned theatre that it was; the eviscerated, dead fish that it was when the virus first decimated lives and livelihoods, life has returned to its pre-pandemic splendour, complete with narcoleptic tourists, thriving Christmas markets and those illicit bakeries. This ambiguity; the indeterminate nature of the secret bakery; the fact that it is both open for business and not, that it requires prospective customers to be at once discreet and audacious in order for its mysterious protocol to be successfully handled, is instructive. It illustrates a salient quality at the heart of Italian life, an ambivalence that fascinates and attracts me as an earnest, literal-minded Brit. In Italy we are often simultaneously aware of the official narrative and impenetrable rules, and then the more elastic narrative: a volatile contempt for the regulations. There is, above all, the merciful, alchemical concept of “arrangarsi”, which translates as “getting by or round”, a concept born in Naples but which has its practitioners all over the Italian peninsular. Often people have to improvise to get things done here, whether it is an electrician finding new ways to install cables in crumbling, cramped spaces, or plumbers locating cracks in ages old water pipes with clairvoyant intuition, or drivers negotiating absurdly narrow streets which at any given moment they share with octogenarian cyclists going the wrong way (“contro mano”), screaming ambulances that are more or less perpetual during the day, and scooters that dart in and out of the traffic like x–wing fighters. This Italian cabaret is infectious, possesses a kind of rude energy and is an antidote to the poisons of literalness, officialdom, and Calvinistic rigor. I must admit I did fear for the survival of the Italian cabaret in the midst of the pandemic when all at once a gigantic Northern European blanket of severity got dumped over Italy, threatening to smother it. It’s a relief to find that things are now as chaotic and colourful as they ever were and that ambiguity is still oiling the grinding wheels of bureaucracy and fortune. Perhaps what I am talking about constitutes one of the reasons why I am reluctant to leave the place. There is a sense here that life’s capriciousness and difficulties, whilst retaining their intractable nature, are at least also met with a strong dose of humour, inventiveness and compassion, that there is always a way: through, round, above, over, beneath … As the last days of 2022 play out I ponder on the thought that there are worse places to be. And that clandestine pastries offer consolations that have yet to be named.

Baret Magarian is an Anglo-Armenian writer who resides in Florence. His novel The Fabrications is a dissection of the media and fame today and has been acclaimed by the TLS and The Seattle Review of Books, among others. Melting Point, a collection of short fiction, was hailed by the Dublin Review of Books and World Literature Today as a book of considerable daring and power. He is currently working on a second novel, set in the Mojave desert.

Photo: View of Florence at sunset from Piazzale Michelangelo by Benson Kua