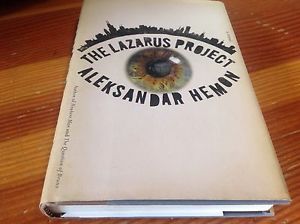 The US has taken Aleksandar Hemon to its heart. While visiting Chicago in 1992, war broke out in his native Bosnia. Unable to return to a besieged Sarajevo, he claimed asylum in America and made it his ‘home’ (parenthesis intentional).

Already a published writer in his native country, after taking a succession of low-grade jobs and studying for a postgraduate English degree, in 1995 he published his first story written in English.

By the publication of The Lazarus Project in 2008, he was established on the American literary scene, appearing regularly in The New Yorker, Esquire and The Paris Review. In 2004 Hemon received a Macarthur Foundation ‘genius grant’, an endowment he lampoons in The Lazarus Project, which went on to win a clutch of US awards and plaudits, including a shortlisting for the National Book Award, a prize open only to US citizens.

In the UK, while the reception has been warm, Hemon has not achieved the elevated status he has enjoyed in the US. Perhaps this is because he tells an intensely American story. The Lazarus Project makes this clear. The novel describes the efforts of Vladimir Brik – a Bosnian immigrant living in Chicago, in receipt of a Macarthur-like grant – to uncover the story of a Jewish immigrant killed in the city nearly a century earlier. This quest takes Brik back to Europe, on a tour of Romania, Ukraine and finally his native Sarajevo, where he examines the scars left by a century of turmoil, dispossession and deracination. During this darkly picaresque journey, Brik also contemplates his own life as an exile, as a person reborn: a modern Lazarus.

The conceit – that the book Brik is writing appears as parallel chapters within Hemon’s novel – confronts America with its own sometimes bloody, often intolerant history. But it is also bears witness to Hemon’s own processing of the traumas of his native Bosnia.

Indeed, much of Hemon’s writing is autobiographical. In a 2015 interview in The Independent Hemon says, ‘I resist autobiographical interpretations … but I’m everywhere in my books. My characters aren’t who I am but who I might have been.’

This potential for self-fulfilment is at the heart of the American dream. It is not, by any stretch of the imagination, part of the UK national psyche. Which is perhaps why, in so many British interviews, reviews and articles about Hemon and his work, you will find mention of the apparently startling fact that this ‘Dazzlingly’ (The Telegraph) writing, this prose so powerful it ‘could wake the dead’ (The Observer), is in the writer’s second language. The Observer expands on this:

‘one fact about its author keeps rushing from the background to take centre-stage – that fifteen years ago Aleksandar Hemon had only basic English. To have acquired as an adult the mastery to publish literary fiction puts him in the same boat as Joseph Conrad.’

For his part, Hemon is clear: in a 2015 interview for English PEN he states, unequivocally, ‘I’m not a writer in translation. I think of myself as a bilingual, bicultural writer, because I write in two languages, English and Bosnian, and when I write in either of those languages, I’m fully inside that language, so I don’t translate as I write.’

In The Lazarus Project, Vladimir Brik, answering a barrage of questions says: ‘Yes I did speak English before I got here. I have a degree in English Language and Literature from the University of Sarajevo. But I am still learning it.’

Like Brik, Hemon’s University of Sarajevo degree is in English. Yet countless articles I have looked at while researching this piece state boldly that he had very little English when he arrived in Chicago.

Perhaps the truth can be found in an interview Hemon gave to Salon in 2013. He describes how, in the early 1990s, he had a ‘need to acquire English so I could write in English by reading’. He combined this project with the deconstruction of his literary aesthetic, which until then he had based on the approach taken by his Sarajevo professor, Kojevic, who Hemon discovered was a close ally of Radovan Karadzic (currently being tried for war crimes).

For the UK, as The Observer comments demonstrate, this is a hugely admirable achievement – not only so fully to absorb a new language, but to face the horror of one’s past and rebuild a working life that is disassociated from it.

In the US, however, this is, if not par for the course, at least the ideal every immigrant – and therefore the vast majority of Americans – should aim for.

We UK readers are as astounded by Hemon’s work as US readers are – his latest book The Making of Zombie Wars has been widely acclaimed on both sides of the Atlantic. But our divergent histories – the kinds of collective experiences that are the raw material for so much of Hemon’s work – mean we British readers can only absorb him as a human writing about human experiences, not as someone documenting our national narrative.

This blog was originally published on ELit Literature House Europe website on 18 April 2016.