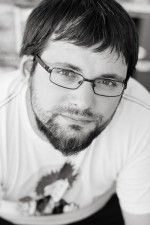 The Slovenian novel began in a tavern. This doesn’t mean that Josip Jurčič wrote continuously drunk. (Although that is how most of early Slovenian poetry came to be.) The first Slovenian novel, The Tenth Brother, literally starts in a tavern: “Narrators have, as is claimed by famed novelist Walter Scott, the ancient right to begin their tale in a tavern, that gathering place of all travelling folk, where diverse characters reveal themselves to one another directly and honestly alongside the proverb: in wine, there is truth.” Here Jurčič explicitly emphasises its application as a literary convention, explained by the tavern being the only place of its kind for public and social life in rural areas, where all kinds of people meet and where (only) after a glass or two, a person shows their true nature.

Today, the Slovenian novel happens in a dive bar of a different sort. A place where courage does not require wine – since, hidden behind a more or less fabricated nickname, nobody sees you, nor does it cost you anything. The worldwide web is a growth medium for opinions, where all kinds of “originals”, as Jurčič would describe them, get to speak up, and where one can endlessly debate the euro crisis, the condensation trails of airplanes, the cuteness of the newest cat sensation … and books. In Slovenia, the latter debate takes place, aside from the rare blogs dedicated to reading (e.g. this or this, alas, both only in Slovenian), mainly in the context of the Kresnik Prize, the prize for the best Slovenian novel of the past year, a debate I intensely followed in the last two years while participating in the awarding of the prize as one of the four jury members. A little out of curiosity, a little out of world-weariness, with a little hipster distance, and with a little love.

I won’t claim that an extensive part of the Slovenian public debates the read, unread, and later (not) nominated books; one sometimes even gets the feeling that behind the various pseudonyms, there hides one and the same person. Yet these debates have the unmistakeable flair of popularity. The people that make themselves heard are people that read much more than the sad Slovenian average, but at the same time do not themselves write, study, or in any other way deal with literature. (Well, to be honest: sometimes there appears an author and anonymously contributes how much he liked his own novel.) Their comments thus vary from naked “likes” to more detailed analysis, from one or two sentences to extensive essay-like outpours, e.g. how the reader was touched by the characters of the novel, how he liked them or hated them, how he read the author’s style and where he began to get bored and put the book down … An insight into how the anonymous public experiences individual literary works can be exceptionally interesting – as a study of the reception of the modern Slovenian novel. But more importantly: it is part of the debate on literature that is necessary if we are to speak of literature as a vital part of society. The book is dead if people aren’t reading it, but it isn’t any less dead if it is read in silence and nobody talks about it.

The other part of the debate exhibits the passion of readers that cheer on their favourite writers and books. And from this point of view, it is certainly a smaller ego-trip for individual authors who have the most or at least the most fervent followers; personally, I have my reservations about this. Not so much because I was, as a jury member, berated as well as insulted – especially last year, when we awarded the prize to the somewhat excellent but less communicative work Bodies in the Dark by Davorin Lenko – but because I fear that in this way, the dialogue on art, too, is being transformed into a battlefield, just as is happening in all other social areas, and that it no longer is a dialogue but a monologue of the typical internet troll. For example, to claim that some novel is the best without having read all others (and you certainly haven’t, unless you are also completely insane – which by itself somewhat reduces the weight of your opinion – since 100 new original novels are published in Slovenia every year) or at least having read all those that have been nominated (of which there are initially ten and later five), is simply regular trolling. To criticise the jury that it selects “novels for literary critics” and not for readers is akin to yelling at an empty bottle of brandy for having made us drunk. That, after all, is the point of a jury – to select the novel that is best, of the highest quality, and most complex, as these terms are understood by a professional reader. Why would a jury choose the novel that would be most enjoyed by the average reader? Average readers do this by themselves, with a jury or without, and nobody stops them, nobody censures them – in the library system Cobiss in Slovenia, we can continuously check which books are the most borrowed. And why all the offense and anger if the book closest to you doesn’t “win”? Surely that can’t reduce or devalue your love for it.

Competition is a crucial aspect of the institution of literary prizes, but there is no need for it to be included in other discourses about literature. Conversations about books are rare enough as it is, and it is a shame to waste most of the energy going into them on cheerleading and on things incidental to literature, which for the individual bookworm literary prizes are. The latter are in any case the black hole around which the literary system revolves, to the extent that it hasn’t been sucked in entirely – on literary prizes depend the financial survival of the author, his relationship to his publisher, the media attention devoted to the book, on them depends whether a work is worthy of a translation or not, or whether it will be treated at university or not … For this reason, it is nonsense that conversation about literature condenses around prizes, when books could and should be talked about always and everywhere.

This blog was originally published on ELit Literature House Europe‘s website on 12 November 2015.