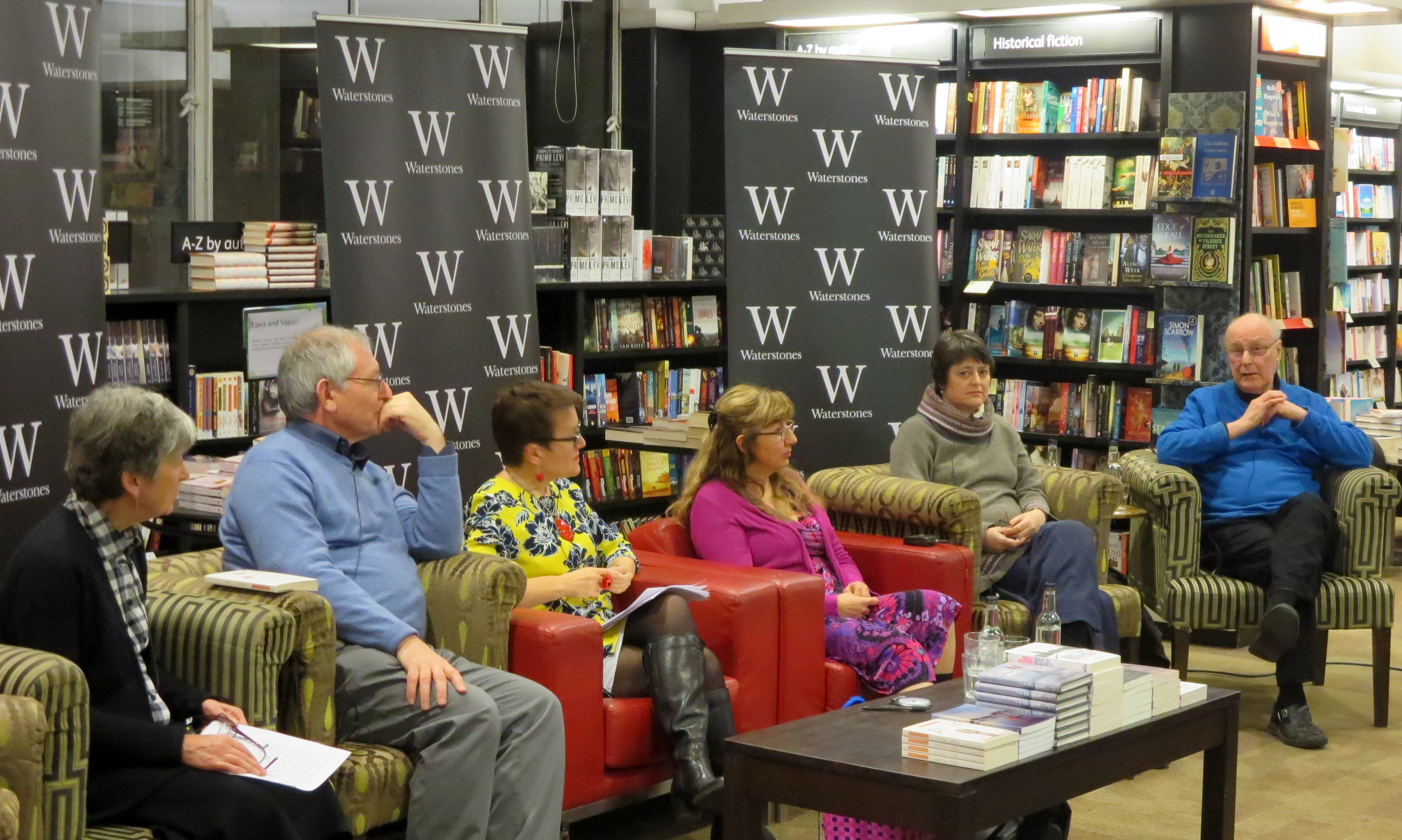 What a difference a year makes.

On the 16th of February 2015 I wrote to the Emerging Translators Network:  “Today  is a very special day for me: I have started to work on the translation of My Mother Is a River, a beautiful first novel by Donatella Di Pietrantonio, which will be published in due course by Calisi Press, a (very) small publishing company I am setting up to focus on translated fiction by Italian female writers.”

Exactly a year later, after becoming a publisher and a published translator and experiencing one of the steepest learning curves of my life, I took part in an event at Waterstones Piccadilly, alongside a panel of eminent Italian-English translator colleagues – Howard Curtis, Katherine Gregor, Silvester Mazzarella, Jennifer Radice and Cristina Viti – to discuss Italian women writers. I had helped to organise the event and it was chaired by the journalist Rosie Goldsmith, the passionate and enthusiastic chair of the European Literature Network.

The idea for the event came from attending an event at Waterstones Piccadilly last autumn to introduce Elena Ferrante’s latest book in English. The author’s elusiveness meant that Ann Goldstein, Ferrante’s translator, attended as her “representative on Earth” (Rosie’s words). It was the first time that the translator – a figure often unknown to the reader and rarely acknowledged on covers and in reviews – became not only visible but also appreciated for her intimate knowledge of the work in question and her skill and expertise in making that work accessible to a wider public.

In the course of a very interesting but too brief an evening we covered many topics. We talked about how often a translator will have no choice on what they translate and how translating books we love, and books we like a lot less, presents different challenges. The translator is often in a no-win situation – in a good translation we become “invisible” but we are the first to be blamed when the book we are translating is not well written or simply boring, as improving an original poor text, though tempting, is not what a good translator should do. The question of course is, why are such bad texts being translated in the first place when so many truly remarkable books go unnoticed?

Some of the translators at our event said that they translate into a language that is not our “native” tongue, a practice which is often frowned upon. We touched briefly on how difficult it is to define someone’s predominant language, as this may well be different, for many reason, from the one we are born into. Multilingual people can sometime adopt another “mother” language and sometimes we use different languages in different contexts. Katherine’s told us that she prefers to use Italian when cross, not only because Italian is a more satisfactory language to be cross in but because it also allows for the outburst to be more easily dissipated and forgotten. I found this fascinating as my own experience is precisely the opposite: I adore how English allows me to express intense displeasure without straying into an emotional outburst. I guess this says as much about how we relate to anger as it does about our relationship with the languages we speak, and this also highlights the difficulty of applying general rules to the complex issue of language identity. In this context we also mentioned the British-American author Jhumpa Lahiri, learning, and now writing in, Italian. There are many other examples of writers using a language other their native one to write beautiful prose and poetry – Elvira Dones, the Albanian writer and journalist, and the Albanian poet Gëzim Hajdari, for example, both write brilliantly in both Albanian and Italian. Many other examples could be found. If writers can do it, we asked, why can’t translators? What are translators, after all, if not writers?

We also looked at the scarcity of Italian books in translation, a topic raised by the recent article in Asymptote Journal reporting that the fascination the American market with all things Italian does not seem to stretch to Italian literature – only 174 of the books published in the US between 2012 and 2014 were originally written in Italian, compared with 539 French books translated, and 385 German works. We didn’t have comparable figures for the UK market but we expected the two markets to be similar.

In 2013 and 2014 a series of articles made us aware that less than 30% of works translated are books written by women. In the wake of this realisation, a workshop was held during the International Translation Day (an annual event dedicated to literary translation) held at the British Library in 2014 which focused on “Women in translation”. My attendance to this workshop was instrumental in my deciding that Calisi Press should only publish women writers. At the time it was simply a practical choice: the two titles I was considering at the time were both written by women and Calisi Press intended to be a niche publisher in any case, I felt that narrowing my focus would not be detrimental. But the more I looked into the gender politics in publishing, the more I became aware that in fact Italian women writers are also neglected in their own market. In a cursory survey of reviews in L’Indice and Leggere Tutti, two Italian literary magazines, I discovered that only about one in four of the books reviewed are written by women. Sadly, this misogynous attitude is not restricted to Italy, as my research revealed that the same bias accusations have been levelled to our own Times Literary Supplement and the London Review of Books. When I set up Calisi Press it did not occur to me that I was about to take a feminist stance on this, but what I have learned since starting on this path has made me determined to do my bit to improve this imbalance.

We then passed to a closer examination of the titles each of us had translated and a short reading from each book. Silvester Mazzarella translates from Italian and Swedish and has translated about 15 novels, including those by three generations of Italian women – Dacia Maraini, Michela Murgia and Francesca Petrizzo. He vividly introduced Accabbadora (published by MacLehose Press), by Michela Murgia, the Sardinian writer and politician. In this powerful novel, Maria, the fourth child of a widow, is adopted by the old and childless Bonaria Urrai. She feels much loved by her new ‘soul mother’ but she discovers over time that she is keeping something from her, a secret life that is intimately bound with Sardinia’s ancient traditions and customs. Francesca Melandri’s Eva Sleeps (to be published by Europa Editions in May) was introduced by Katherine Gregor, who used to be a theatrical agent before becoming a translator. Eva’s story is the story of a woman searching for the truth about her origins. The backdrop to this story is South Tyrol, in the north-eastern corner of Italy, an area which was part of Germany before being annexed to Italy and where the main language is still German. Katherine, who was born in Italy and was brought up by her Russian-Armenian grandmother before moving to France and eventually to the UK, explained how she could relate to a character that could not be defined by her nationality or her language. I can relate to this too – although I did not leave Italy until I was 20, I had already lived in five different towns by then. Wherever I was, I had always felt part of me was elsewhere. It was to be become a constant theme in my life. Howard Curtis, a translator with a vast experience, having translated over 100 books from French and Spanish as well as Italian, introduced us to About Time by Simona Sparaco (published by Pushkin Press). Simona’s protagonist is a Svevo Roman, a handsome, rich and successful businessman, a ruthless workaholic and playboy. One day everything changes and time suddenly speeds up, but only for him. His life becomes a mad whirl, while he tries desperately to keep up with colleagues and friends, until his life acquires a meaning that prevents everything spiralling out of control. The House of Solitudes by Fausta Garavini (published by Troubador) was introduced by the translator Jennifer Radice. In this gothic and historic novel, set in a house shrouded in mist and in the distant past, a journalist takes refuge in an isolated house in the middle of a lagoon to recover from an accident. Soon the big house begins to intrigue him, and he starts to look for clues around him to reconstruct the life of its inhabitants. He discovers letters, photographs and newspaper clippings which tell the story of a former family of the house, discovering a story of lost hopes and disappointments, loves and betrayals. Cristina Viti then introduced Mariapia Veladiano’s A Life Apart (published by MacLehose Press). This is the story of Rebecca, a daughter of startling ugliness born to two extremely beautiful parents. The shock of having given birth to such a monster leads the mother to withdraw both herself and her daughter from the world. But against all odds, with a little help from some remarkable friends, Rebecca discovers a talent for music that proves that inner beauty can outshine any other. A Life Apart is an irresistible modern fable that will resonate with anyone who has ever felt that they don’t belong. In addition to being a brilliant translator, Cristina is also a mesmerising performer and her reading was riveting – I could have listened to her all night. I concluded by talking about My Mother Is a River by Donatella Di Pientrantonio (published by Calisi Press). In this story of a ‘a love gone wrong from the start’, written in an understated and yet very powerful way, we listen to the narrator, whose name we never learn, talking to herself or to her mother, whose voice we never hear. Reading this story is like eavesdropping on a conversation, which is in itself a slightly unsettling experience, and we discover that the mother is suffering from dementia, and how this strains and then transforms their already difficult relationship. Rosie rounded off the evening by asking us all to name some Italian women writers we would like to translate. It was difficult: there are so many writers who could be on the list (and please contribute your own!) – Luce D’Eramo, Clara Sereni and Igiaba Scego were just a few of them. This list alone was a true testimony to the wealth and range of writing that we all felt English-speaking readers would love. A clear mission for Calisi Press but also one I hope you might join in with.

Photos from the event in Waterstones Piccadilly on 16 February 2016.