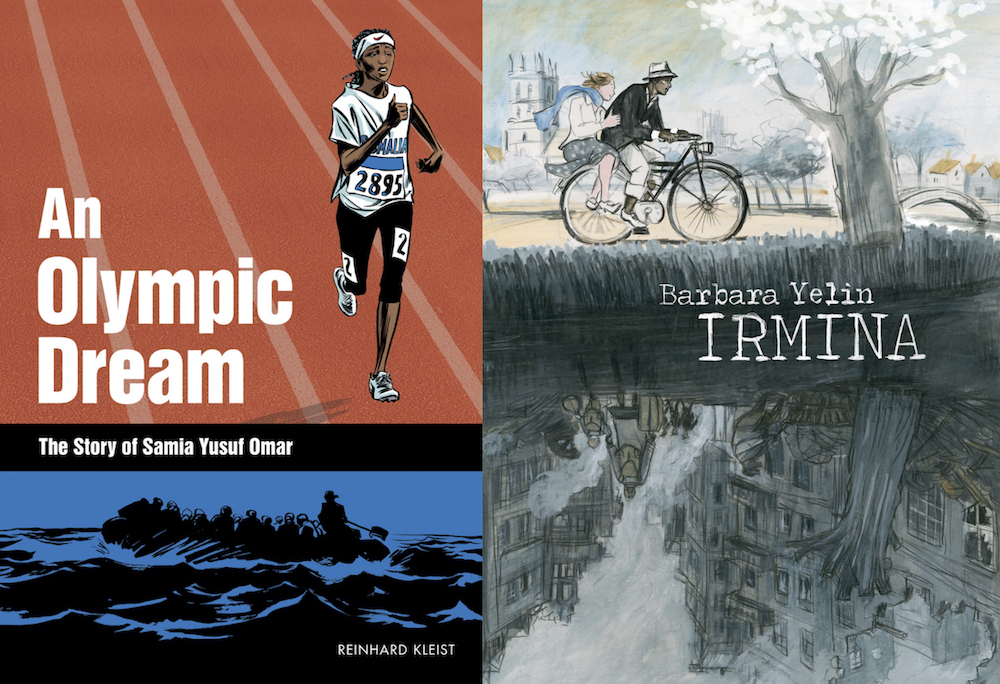 Graphic novels convey a special form of artistic expression in literature. They deal with a wide spectrum of topics, ranging from adaptations of well-known literary classics to controversial themes in politics and society. Two prize-winning titles from Germany will be published in English translation in March 2016: Irmina by Barbara Yelin and An Olympic Dream by Reinhard Kleist. To mark the occasion, the Goethe-Institut and publisher SelfMadeHero host a discussion with these two authors. Together with Rosie Goldsmith, they will discuss their books and artistic work.

IRMINA
In the mid-1930s, Irmina, an ambitious young German, moves to London. At a cocktail party, she meets Howard Green, one of the first black students at Oxford, who, like Irmina, is working towards an independent existence. However, their relationship comes to an abrupt end when Irmina, constrained by the political situation in Hitler’s Germany, is forced to return home. As war approaches and her contact with Howard is broken, it becomes clear to Irmina that prosperity will only be possible through the betrayal of her ideals. In the award-winning Irmina, Barbara Yelin presents a troubling drama about the tension between integrity and social advancement. Based on a true story, this moving and perceptive graphic novel perfectly conjures the oppressive atmosphere of wartime Germany, reflecting with compassion and intelligence on the complicity that results from the choice, conscious or otherwise, to look away.

BARBARA YELIN was born in Munich and studied illustration at the Hamburg University of Applied Sciences. In 2015, she received the Bavarian Art Award for Literature for Irmina, which also won the Best German Graphic Novel prize at the PENG Awards. Yelin is also the author of Gift (with Peter Meter) and Riekes Notizen. She lives in Munich.

AN OLYMPIC DREAM
In 2008, 17-year-old Samia Yusuf Omar stood alongside some of the fastest women in the world on the start line of the Olympic 200m. Four years later, she boarded a refugee boat to Europe, risking her life on the waters of the Mediterranean. An Olympic Dream tells the remarkable story of Samia’s attempt to compete at the London Games in 2012. Picturing her life in Mogadishu, a city ravaged by conflict where the female athlete encountered discrimination and abuse, Reinhard Kleist reveals the challenges she faced both as a sportsperson and as a woman. In doing so, he shows why Samia, like so many others, would choose to flee. Following Samia’s journey through Ethiopia, Sudan and Libya to its tragic conclusion, An Olympic Dream is a forceful statement on Europe‘s response to the refugee crisis. But it is also a moving account of a remarkable life, best remembered for a single moment: when an unlikely Olympian, dressed in knee-length leggings and a baggy t-shirt, finished in last place – and the Bird’s Nest stadium erupted.

REINHARD KLEIST was born in 1970 near Cologne. After graduating from the School of Graphic Art and Design in Münster, he moved to Berlin, where he has lived and worked as a freelance comics artist and illustrator ever since. Kleist’s books have been translated into many languages and have received several prizes. His graphic novel Johnny Cash: I See A Darkness won both Eisner and Harvey awards, as well as receiving the Max und Moritz Prize for the Best German-language Comic. With The Boxer, Kleist became the first cartoonist to receive the German Youth Literature Award. An Olympic Dream was serialised in the Frankfurter Allgemeine Zeitung before being published, with some revisions, as a graphic novel.

More information about the event here.