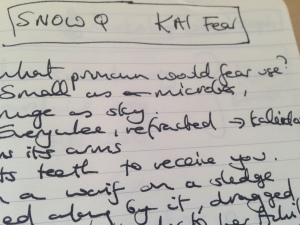 Work on our collaborative project Snow Q to re-imagine Hans Christian Anderson’s Snow Queen is intensifying. Rehearsals with our actor, Rita Suszek are underway.  Creatures are coming to life – and being filmed. More about all that later. Meanwhile some of us still grapple with never-ending questions.

Friend* (after I have told her about Snow Q,): so are you writing a feminist version then?

Me: that’s a good question… (gulps)

Next I’m reading Helen Simpson’s introduction to Angela Carter’s The Bloody Chamber (which I’ve found unexpectedly poignant) who says it was a misnomer to call Carter’s stories feminist versions. Carter herself said she wasn’t writing versions at all – she was drawing on the latent material* in European fairy stories and inventing her own stories. Now I’m worried. Have I accessed the latent material?! I’m certainly inventing things…

I can’t put my finger on it, but I don’t think I’m writing a feminist version either. I mean what I’m writing is not not-feminist. Feminism is always there for me. Whole volumes have been written about how women’s position in society relates to mental health, isolation and while some men and boys (like those in the Young Carers group we have been working with) are carers too, it is traditionally such a female role.

I’m heartened to read in Dagmara’s recent blog that she questions what she’s doing every day. It’s not questions I mind but the rising panic or sense of doom which accompanies them.

I speak to another friend and indefatigable activist/feminist artist Caroline Halliday. She says feminist art ‘supports/raises issues of equality for women, and for many others’. I tell her what I’ve been focusing on is writing poems in the voices of two young people, Gerda and Kai, poems of miscommunication, yearning, withdrawal and isolation. We agree it is difficult to express what makes for a wider definition of feminist art. Caroline Halliday says she often thinks in terms of a painting of a cat. (I adore cats but mentally translate the cat into a Snow Q animal, elk, reindeer, crow…) Is a painting of a cat feminist or not? She says to be feminist art it has to ‘show directly OR in its presentation/title or context that it has a feminist intention. Otherwise it continues to be a presentation of the status quo (patriarchy)’.

Does my intention show?

Not for the first time in my life I hold two thoughts in my head. All art is political and to pretend otherwise is just kidding yourself as well as an abdication of responsibility. And at the same time every artist must be free to ditch (conscious) intention. In fact most writers I know deliberately try every trick in the book to outwit authorial intention as it stifles the creative flow.

And then I listen to Aviva Dautch, another friend and wonderful poet talking on Radio 4 Woman’s Hour about her poetry, about her mother, mental illness, about survivors of the Holocaust and political writing. She reminds listeners how Emily Dickinson spoke of telling all the truth but telling it slant. She describes her own writing as ‘political but not polemic’.

I go back to writing the poems.

This blog was originally published on Snow Q Project‘s website on 22 October 2018.