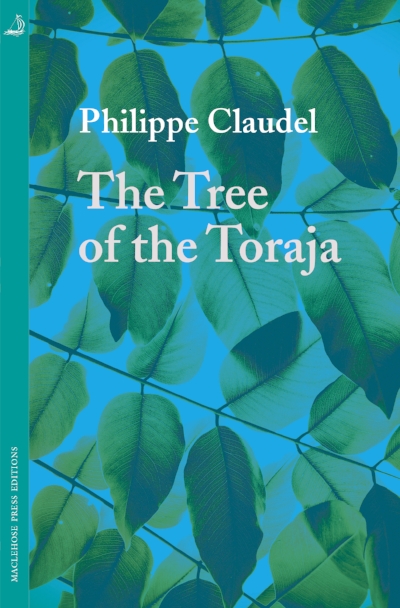 #RivetingReviews: Lucy Popescu reviews THE TREE OF THE TORAJA by Philippe Claudel

Philippe Claudel’s latest novel, elegantly translated by Euan Cameron, tackles friendship, mortality and renewal. A filmmaker loses his best friend to cancer and undertakes a profound re-evaluation of his life. On a trip to Indonesia, this fifty-year-old unnamed narrator learns of the Toraja custom of interning the bodies of their deceased children in the trunks of trees. The tree continues to grow with the child’s skeleton encased inside. The ritual celebrates, rather than denies, their short lives:

‘We bury our dead. We burn them too. Never would we dream of entrusting them to the trees … In our world, nowadays, we play down the presence of death. The people of Toroja make it the focal point of theirs.’

On his return to Paris, he discovers that Eugène, his producer and confidante, is dying. The filmmaker does knows a little about loss: his father had died at eighty-nine; a few fellow mountain climbers had met accidental deaths; and his former wife, Florence, had given birth to a dead child. But Eugène’s death unsettles him and he begins to reflect on Florence’s long bereavement:

‘Like the Toraja tree, she continued over the years to have her child grow within her innermost being. Her woman’s body was filled with the presence of the little dead corpse which she never really buried but which she welcomed into her home, into her inner dwelling and into her life … who took up so much room that Florence never, either with me or Luc, her new husband, tried to have another child afterwards.’

He has rarely dwelled on his own or others’ immortality. The loss of his mentor throws him into a mid-life crisis. Without his friend’s encouragement he is unsure whether his next film will be a success. He revisits the suicide of a childhood friend he had humiliated and the death of a mountaineer friend who, while roped together, is struck by lightning and whose corpse he sleeps beside for three nights. He worries about growing old:

‘At my age…one no longer lives from day to day. We become miserly accountants. We keep a record of each minute, each hour, each day, each month. We count our coins.’

When he falls for a younger woman, Elena, he feels his life descend into cliché. Eugène’s furious daughter berates him for his crassness, while Florence tell him, ‘you have always been dramatically predictable’. Despite his cautious happiness, he remains aware: ‘Elena’s beauty disturbed me because it was not made for me. I was an intruder in her existence … who brought with him the anxieties and burdens of his age.’

Claudel poignantly illustrates how film and literature can help us process grief – his narrator finds solace in both, while writing gives him the opportunity to continue a one-sided conversation with his dead friend. This is a poignant mediation on bereavement. However, the transience of the filmmaker’s crisis underlines that, when it comes starting afresh, middle-aged men have the advantage over woman.

THE TREE OF THE TORAJA

Translated from the French by Euan Cameron