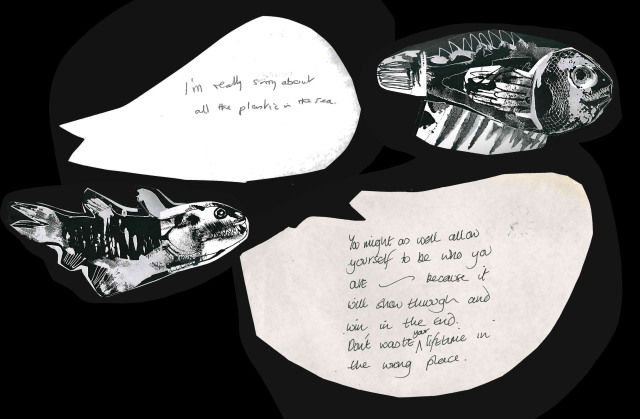 Snow Q: Older and Out by Maria Jastrzębska

In the Snow Queen story Gerda is helped on her quest by a range of characters,  including two of my favourite: the old Lapland woman and the old Finnish woman. They live in the far north of the world, nearest to the Snow Queen’s frozen domain.  The Lapland woman guides Gerda on her way and in order to communicate with the Finnish woman – and since she has no paper – she writes her a message on a dry fish. When the Finnish woman receives the message, after she has read it three times so that she knows it by heart, she pops the fish into her saucepan as she never wastes anything … We had some wonderful discussions with the Older and Out group about stories and characters they remembered being influenced by or looking up to as children. These often included comic book characters rather than literary ones, Rupert Bear, Minnie the Minx, Desperate Dan, Wonder Woman, Dan Dare, also The Famous Five as well as actual war heroes such as fighter pilots Douglas Bader and Guy Gibson. Some of the group were children during World War 2 and could remember the impact of their stories vividly.  Some remembered growing up before TV and the thrill of being allowed to buy a comic. Not surprisingly, a couple of the women mentioned feeling alienated from female role models of the time.

Although we’d already eaten our fish for lunch (followed by trifle!) Dagmara had kindly prepared some Snow Q paper fish for me which I then asked the group to write messages on. Being passionate about inter-generational dialogue I asked them to write messages for younger people on the fish – in true older Lapland woman style – in particular their messages for young LGBTIQ people. These messages will be worked into our installation with Dagmara’s help.

In the work I’ve done with both older and younger LGBTIQ people before as part of the ongoing heritage project Queer in Brighton I’ve been struck by how vital this communication across different generations is. We often don’t know our own history as it’s been erased or covered up in mainstream narratives. Our relationship to family is not always straight(sic)-forward so that feeling connected to those younger and older than ourselves is especially important. We need our elders. As someone who never had much in the way of role models and who is now older myself, I felt especially privileged and touched to be working not only with people of my age but also those older than me who struggled for years in the face of prejudice and persecution.

This blog was originally published on Snow Q Project‘s website on 2 November 2018.