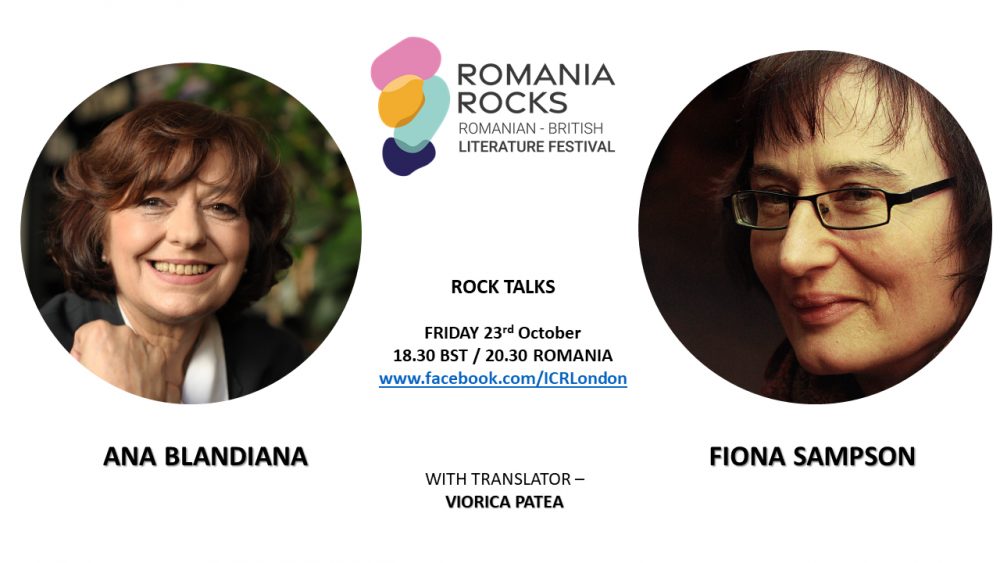 Romania’s best-known female poet, Ana Blandiana, has been translated across the globe, and is a legendary figure for her political activism and creation of the world’s first memorial to victims of communism. Fiona Sampson is a highly esteemed and award-winning poet, academic, writer, and broadcaster, and a long-time supporter of Romanian poetry in translation. The two came together in a “Romania Rocks” discussion as part of the festival, joined by Viorica Pâtea, Blandiana’s translator and a professor of English literature at the University of Salamanca. The academic and festival creative producer, Gabriela Mocan, a specialist in Romanian literature moderated the event.

The first part of the discussion focused on Blandiana and her experience of the Anglophone poetry world. She first read Shakespeare at age 12 or 13 in Romanian translation, and cites him as ‘a modern poet’ – yet she feels closest to Emily Dickinson, whose influence of airy simplicity and unabashed feeling I personally have discovered in Blandiana’s poems. London was the first place Blandiana met great poets: in 1990, she read together with Brodsky and Adonis at the Southbank Centre poetry festival: a landmark for her.  Looking back over a literary lifetime, she remarks upon how powerful poetry was when it was forbidden, the lack of interest in beauty and goodness together in modern society, but also expresses hope for the future of poetry also thanks to the multitude of poetry festivals – ‘poetry fulfills the kind of spirituality that people need now’. I agree. I believe that in our hectic and complicated contemporary world, poetry can offer a short and sweet burst in a busy schedule while hitting the emotional mark.

In response, Fiona Sampson spoke of a ‘sense of elective belonging’, which she defines as ‘one of the advantages of internationalism’. When asked about her most recent poetry collection, she spoke of the ecological crisis to which the Covid-19 virus is also attributed, and the way in which she returns to the earth, to nature, in her poems. Gabriela remarked on the musicality of her poems. I particularly enjoyed Fiona’s recollection of being a child violinist and being enchanted by Bartok’s Romanian Dances, for Fiona suggesting an early affinity for the charm of Romania that would later become a reality. At any rate, Sampson is strictly serious about the status of poetry: ‘We should never think of the arts as entertainment’, she says.

Viorica Pâtea discussed the benefits of co-translation of Ana Blandiana’s poetry: Paul Scott Derrick, her co-translator, is also a poet and thus conscientious about sound. Vioreca translates meaning, he determines voice and music.

I very much look forward to the five books of Blandiana’s poetry next year in English with the publisher, Bloodaxe: it should be a major event in publishing history.