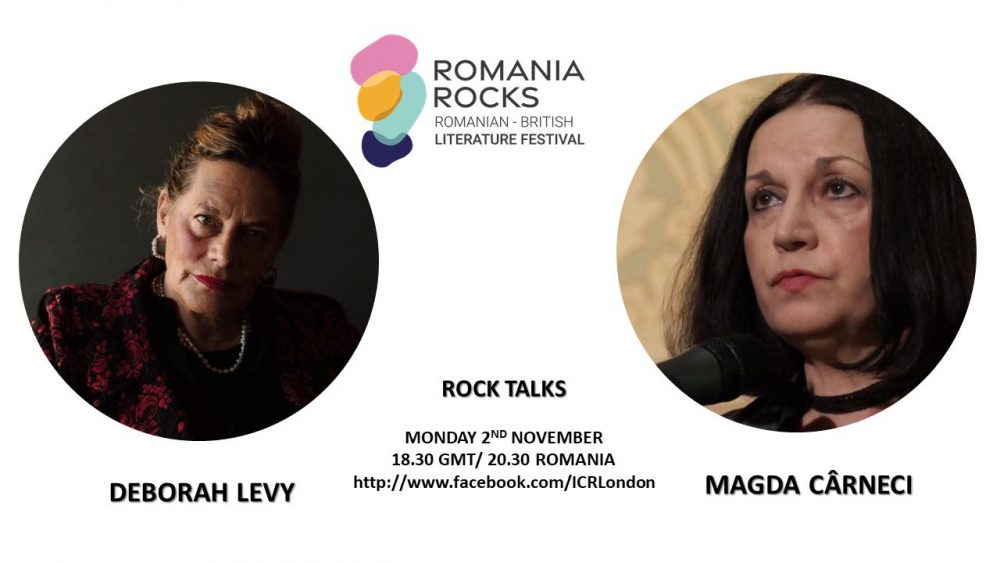 On the day that Deborah Levy won The Prix Femina 2020, she was not in France receiving flowers but in a hotel room in Athens, thanks to the vagaries of the pandemic. She was instead in the digital company of Magda Cârneci in Romania and moderator and ELNet founder Rosie Goldsmith in England for an episode of Rock Talks. Rosie presented Deborah with a bouquet of flowers across the digital divide.

Both Levy and Cârneci are acclaimed poets, essayists, novelists, with Magda Cârneci’s experimental novel Fem forthcoming with Deep Vellum in Sean Cotter’s English translation in 2021. Unsurprisingly, the topic of the pandemic was impossible to ignore, and they shared their insightful opinions: ‘The relationship with bodies and with masks is interesting to me – all that human turbulence hiding under the masks’, noted Levy. ‘And solitude is not the same as isolation for me’, she added. Cârneci suggested: ‘Lockdown was an opportunity to rethink some parts of my life and to try to order my priorities and see if the world will change or not in the future […] There are positive aspects of this situation which we should accept. A change is a change and we have to accept it […] Not everything was good in our previous life: everything was so accelerated, in a way we had lost control over lives; we did so many things that our inner beings suffered’.

Watching this talk prompted me to think about what the reality of the pandemic means for me, personally and as a writer at the beginning of my career. I admired Magda’s investment in her writing. ‘Writing is my private realm where I am the essence of my self’, she stated. The exchange between Deborah and Magda showed me that there is no universal feeling among writers; it’s more about personality and temperament. Deborah, for instance, revealed that her ‘inner life is fractured, fragmented’, leading me to think that perhaps she responds in a more cerebral and less emotive way to her own writing. Or perhaps it a question of which genre they write in, with Levy discussing mostly fiction and Cârneci poetry – although they both excel in both genres.

Deborah spoke of the ‘distilled quiet’ of the prose written by poets – and Rosie suggested that Deborah’s own ‘Living Autobiographies’ have this quality, with Magda expressing her admiration for the psychological depth of Deborah’s work. Levyherself credited her decision to write these autobiographies with immediacy and without loftiness. Levy’s novel The Man who saw Everything (Penguin, 2019), where she employed a similar immediacy to an historical period (the 1980s in Germany and England) and which she described as being ‘about how political ideologies change people’, has won considerable acclaim. Cârneci too remarked that young Romanian writers who did not live through the Revolution like to write about it nowadays, and quipped: ‘I don’t think anyone who has experienced restricted freedom of movement would actually vote for it’.  It’s hard to disagree. For me that statement drives home the sad irony of our current restricted movement due to the pandemic.

Finally, Magda and Deborah discussed the idea of beauty and art and literature – both women engage closely with the visual arts. Magda proposed the idea of bringing more beauty back to modern art – and this time, Deborah was more optimistic. Whether agreeing or disagreeing, these two highly articulate and engaged authors created one of the most dynamic discussions of the Romania Rocks Festival.