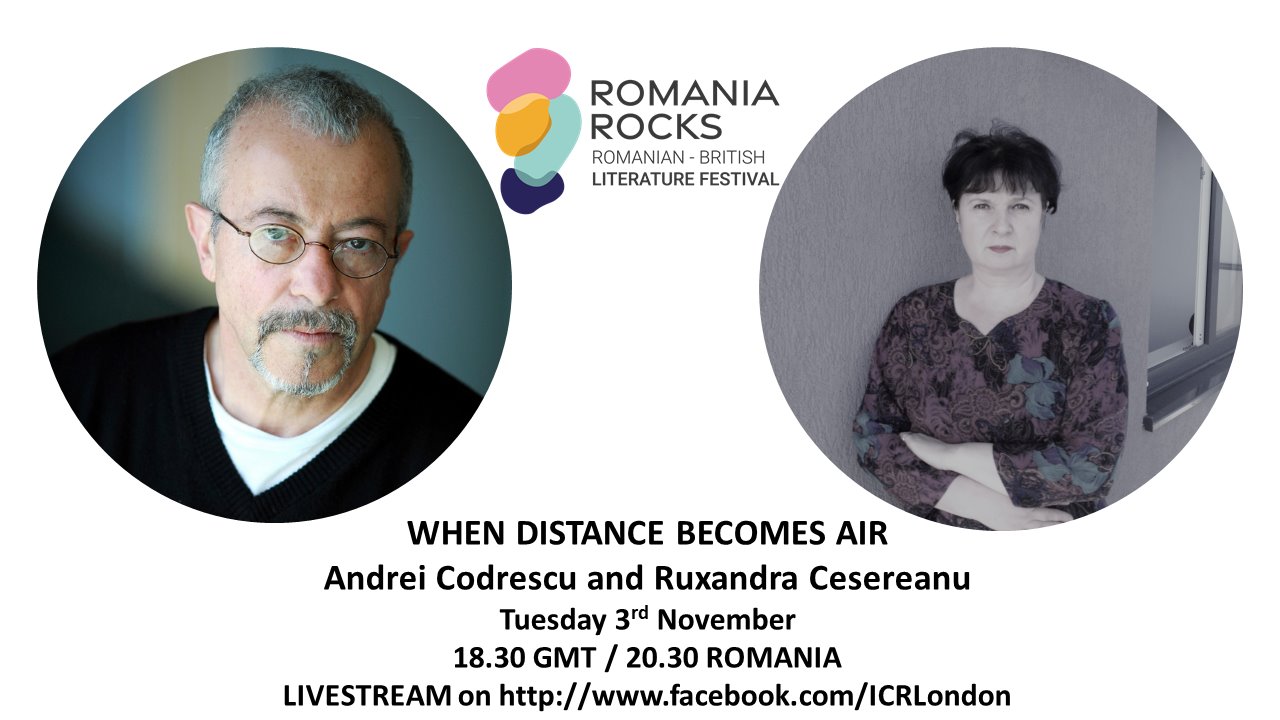 In their joint event, hosted by the festival’s Creative Producer and co-curator, Gabriela Mocan, the two Romanian authors came together for a very special virtual encounter entitled “When Distance Becomes Air”, which describes a very real creative collaboration.

Ruxandra Cesereanu is a poet, prose writer, editor, and academic. Andrei Codrescu is a poet, novelist, radio commentator, and screenwriter, writing in both Romanian and English – in fact, his most recent book written in Romanian, Vis diacritic/Diacritic Dream, will be published by Nemira Publishing House in a few weeks’ time.

Codrescu spoke to us from New York. He left Romania for New York in 1966/7, while Cesereanu gained recognition in her native Romania, where she lives. The two first met at a conference at the Romanian Black Sea Coast in 2006, and when Codrescu returned to the US, they co-wrote The Forgiven Submarine via email – a most intriguing idea, consisting of a narrative poem and passionate dialogue in which Codrescu and Cesereanu swap genders, taking the guises of mighty monsters and thus creating a metaphor for the philosophical oppositions represented by American and European poetry. Andrei translated it into English, and the rest is history: the book received critical acclaim as an entirely unique project, winning the prestigious Radio România Cultural Prize. It was published by Black Widow Press in 2008.

In this special event for Romanian Rocks, Cesereanu described their collaboration as ‘a parallel history of memories from childhood and youth’. A ‘game which became very profound and very serious’, she attributed its success to its spontaneity. Codrescu agreed: ‘We didn’t know each other well enough to hide anything’.

Listening to their conversation, I thought about what a complex tool and double-edged sword modern technology, and specifically the Internet, is: while it can so easily be used to harm others, the possibilities it offers for creation are absolutely fantastic, extraordinary even, especially given the abstract and tenuous nature of digital communication.

As well as The Forgiven Submarine, Cesereanu’s latest book, Scrisoare către un prieten și apoi către țară/Letter to a Friend and Back to the Country, was also a topic of discussion. A poetic manifesto, the book has received an extremely positive response and has been adapted into a short film, from which clips are shown in the discussion. ‘Initially a lamento and now a call to arms’, the book is a tribute both to Cesereanu’s late mother and to her country. ‘Poetry can be a linguistic catapult and a spiritual platform’, she stated.

The candid way she spoke about this difficult topic was both memorable and touching, and this honesty led me to agree with Codrescu’s suggestion that ‘the values that she (Cesereanu) holds are one and the same for her own intimate self’, which I personally believe is the image an author should aspire to present to his or her readership. Musing on the book’s remarkable success, Codrescu stated that ‘poetry will become a currency’, echoing Ana Blandiana’s suggestion, in an earlier festival discussion, that poetry will fulfill the spiritual needs of the 21st century.

I very much look forward to Andrew Davidson-Novoschei’s translation of Letter to a Friend and Back to the Country, which will surely offer us something quite unique when it is published in English.