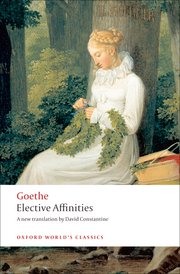 Four people, a big castle, a lot of guests – oh, and a fair bit of chemistry, too … Elective Affinities (“Die Wahlverwandtschaften”) introduces us to Eduard and Charlotte, a middle-aged couple living in peaceful seclusion in their very big house in the country. The two have loved each other from a young age, but only recently managed to come together after the deaths of their respective spouses. Unsurprisingly, theirs is a rather withdrawn existence, in which they’re seeking to make up for the years they spent apart.

However, a letter from an old friend brings a change to this idyll. Otto (hereafter known as the Captain) has fallen on hard times, and rather than let his friend’s talents go to waste, Eduard begs Charlotte to be allowed to invite him for an extended stay, with an eye to using his surveying talents to improve the estate. Charlotte is initially dismayed at the idea, wanting to keep the outside world as far away as possible, but when she receives disturbing news about her niece Ottilie, she decides that it would be best to allow both visitors to join their little circle.

Elective Affinities was written in 1809, just before Jane Austen’s novels began to appear, and you’d be forgiven, on reading my introduction above, for believing that we’re in for a rather Austenesque experience, with the Captain and Ottilie gradually falling in love with each other just in time for the closing chapters. In fact, Goethe has a rather different idea in mind, and it very quickly becomes clear that in introducing the two strangers into their home, Eduard and Charlotte have put their marriage at risk. You see, the husband soon falls for his young guest, and the wife, feeling somewhat neglected, can’t help but admire her manly visitor …

The novel is divided into two sections, with the first gradually unveiling the main characters’ growing attraction for each other  When you look back upon the opening scenes, there are hints of later events all over the place, with many a fateful word spoken:

“I’m not superstitious,” added Charlotte, “and don’t think much of these gloomy suppositions, as long as that’s all they are; but they are often subconscious memories of happy, and unhappy, endings that we have seen in our own experiences, or in those of others.  Nothing can be of more significance in any situation than the arrival of a third party.”
(my translation)

And if three’s a crowd, then four’s just a disaster waiting to happen. It will take several years, a lot of pleading, and a tragedy or two to make our way through this tricky situation.

The title is an interesting one, typical of a man who was less a writer than a polymath with an interest in virtually everything (including, as I am unable to forget, rocks …). The great man produced thirteen volumes of writings on natural sciences, running to over 6000 pages, and he had a particular interest in chemistry. This is where the titular elective affinities come in, explaining as they do the tendencies of seemingly solid substances to separate in the presence of other chemicals, with a preference for another arrangement displacing the original structure. It isn’t hard to see the relevance to this novel – in Elective Affinities, as is the case with chemical bonds, marriage ties can be far looser than you might expect.

Another chemical idea is that of the catalyst (which is vital in any good story, too), and this is provided in the form of further visitors to the castle, including a pair of lovers, the Prince and the Baroness. This noble couple is patiently waiting for freedom from their current partners (and having clandestine meetings in the meantime), and we now get a rather different view of the sanctity of marriage:

In comedy, we see a marriage as the final stage of a wish drawn out by the obstacles of several acts, and in the very moment that it is achieved, the curtain falls, and the momentary satisfaction echoes around us.  In the outside world, it is very different; the play goes on behind the curtain, and when it rises once more, it might be best not to see or hear any more of the whole business.

The Prince’s view is a rather cynical one, yet the idea of short-term marriages and a need to avoid making rash promises seems apt. Eduard, in particular, is only too happy to be persuaded, and the experiment is almost complete …

Of course, the success of any reaction depends on the elements you throw together, and the outsiders (the talented, handsome, sober Captain, along with the attractive, accomplished Ottilie) are fairly inert. If there’s an unstable element here, it’s certainly Eduard: rash, passionate, headstrong, spoilt – he wants what he wants, and he’ll cry if he doesn’t get it. The biggest character of the four, he’s oblivious to others’ needs and pushes ahead against the best of advice (an example of this is his insistence on continuing with his surprise fireworks display for Ottilie, even after a tragedy in the vicinity). There’s always a sense that his impatience will bring about disaster, and that’s exactly what comes about in the final pages of the novel.

Elective Affinities is a clever book, with a style swinging between a sober naturalism and hints of the romantic; Eduard is no Werther, but there’s a lot of sobbing and wailing for one book. At times, the story can be a little Gothic, too, as we’re shown the old castle, secret passages used for nocturnal encounters and a night vigil in the church crypt. The subject matter appears fairly daring for the period (again, if we compare the story with Austen’s romances), but the writer may have been letting off the steam caused by his own personal issues; needing steady employment in Weimar, he wasn’t quite as daring as Eduard in his domestic affairs. The story does sag a little at the start of the second half when the two main male characters disappear for a while, but it soon picks up again, gradually building to an excellent, dramatic finish.

There are plenty of nineteenth-century novels about marriage, but Elective Affinities looks at the subject from a rather different angle, wondering whether the vows we take really should be indissoluble. Eduard certainly has his doubts:

I pity the fool who is forced by circumstances or madness to look forwards or backwards!  We’ve been foolish; should that be it for the rest of our lives?  Should we, for the sake of any consideration, refuse ourselves that which the customs of the age do not deny us?

Of course, you should always be careful what you wish for.  In the end, it might just be best for all concerned to keep their ties the way they are. Chemical reactions can throw up new combinations, but (as I know full well from my school days), there’s always the chance of someone getting burned …

Translated from the German by David Constantine