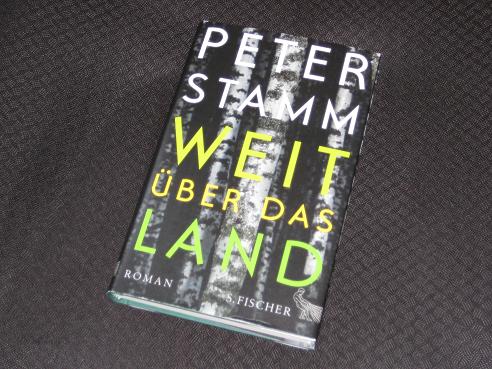 With all my literary travels over the course of the past month, crossing the globe in the search for the pick of the Man Booker International Prize crop, I could be forgiven for wanting something a little closer to home to help me relax between journeys. However, while in real life I barely make it further than the local shopping centre these days, in my literary endeavours I leave no mountain unclimbed, meaning that we’re on the road again today. Although ‘road’ might not be the best word – today’s choice takes us a little off the beaten track…

*****
Peter Stamm is one of my favourite German-language writers, and his most recent novel, Weit über das Land (Far Across the Land – review copy courtesy of S. Fischer Verlag) is a return to form after the slightly disappointing Nacht ist der Tag (All Days are Night). The story beings with a middle-aged Swiss couple, Thomas and Astrid, sitting on a bench in their garden on a warm summer night, relaxing after having just returned from a beach holiday. When his wife goes inside to check on the children, Thomas puts down his glass of wine, gets up and decides to go for a walk – and keeps on walking…

When Astrid wakes up the next morning, she’s surprised that Thomas isn’t around, but it isn’t until she receives a call from his work that she begins to worry. Lying to his secretary, and then to the children, she starts to go over possible scenarios in her mind. The car hasn’t been taken, his clothes are all still in the bedroom; surely he can’t have gone far? As the hours stretch into days, Astrid knows that she needs to involve the police – but what if Thomas doesn’t want to come back?

The need for escape is never far from the surface of Stamm’s work, but Weit über das Land takes this to extremes, taking the reader along for a ride (or, rather, a walk) with a man who has simply decided he needs a bit of fresh air. Thomas’ decision to leave seems as much of a surprise to him as to us, and his initial wanderings through the local fields and hills appear aimless and self-destructive. It’s only when time provides a little perspective that he begins to seriously consider his path, taking the risk of using his credit card, briefly revealing his location before preparing to vanish for good.

Despite spending half the book in Thomas’ company, we never come close to finding out the catalyst for his decision to leave, and in many ways, Weit über das Land, even with its detailed descriptions of Thomas’ travels, is far more a book about the woman left behind. Much of the interest comes from Astrid’s struggle to understand what has happened and her inability to actually accept being left behind, leaving her conducting imaginary conversations with her runaway husband:

What should I do?, she asked him. Do you want me to look for you? To go after you? Are you waiting for me somewhere? Or should I act as if nothing has happened? Do you need time? How much? He didn’t reply. ***

Interestingly, her bewilderment never gives way to rage. Where most people would blame their partner for running away, Astrid begins instead to look back on their relationship, hunting for signs of failure and wondering whether she ever loved him enough.

Meanwhile, out on the wiley, windy alpine meadows, Thomas has no time for such musings. His struggle is far more existential – with the weather changing, his desire to keep far away from other people means that the journey becomes ever more difficult. In this part of the novel, Stamm depicts the landscape of his native region, with the text becoming much more descriptive than psychological. Having left society behind, Thomas’ only worries are immediate: finding water, making it to the top of the next hill, looking for something to eat. If he fails to achieve his goals, he might just be stranded above the snow-line forever. But does he really care?

Weit über das Land is an excellent read, consisting of two completely separate strands, with very little overlap (with minor tinkering around the edges, it could almost be read separately as two connected novellas). A book of gaps, it forces us to read between the lines in the hope of getting to the heart of Thomas’ behaviour. We ask ourselves what (if anything) happens in the old house Thomas stumbles across near the start of his travels and wonder if the apparently idyllic holiday the family had just shared was so perfect after all. Is this just a mid-life crisis, or is there more to Thomas’ decision than he (or Stamm…) is letting on?

Of course, this isn’t the first time the writer has examined the desire to escape that lies within us all. In Ungefähre Landschaft (Unformed Landscape), the main character, Kathrine, does something very similar, fleeing her smothering husband and the small Norwegian town she grew up in. Similarly, Stamm loves to return repeatedly to the theme of relationships in crisis (c.f. Agnes, Sieben Jahre (Seven Years)), seemingly specialising in stories of couples falling apart. What comes across in all these works is the way in which an outwardly happy existence can crumble almost from one moment to the next, the writer expert at emphasising the fragility of a ‘comfortable’ life.

However, this latest work is also reminiscent of another recent German-language work, Judith Hermann’s Aller Liebe Anfang (Where Love Begins). In Hermann’s novel, the main protagonist is forced to reflect on her marriage during the time her husband is absent with work, and the way Thomas’ disappearance forces Astrid to think more carefully about their life together, to see where the cracks began, is very similar:

She had always been the voice of reason in their relationship, and in their family. She sometimes wondered whether Thomas would have chosen a different life if they had never got together. ***

As time goes by, and the chance of her husband’s return becomes ever less likely, poor Astrid must face up to the possibility that theirs was a life Thomas never really wanted at all.

As always, Stamm’s writing is deceptively simple, his stripped-back prose designed to bring his themes into focus. It can often be slightly repetitive, reflecting the actions of his characters (Thomas putting one foot in front of the other, Astrid unconsciously doing her housework) and is obviously a deliberate effect, even if some readers might be put off by the lack of linguistic fireworks. For the non-native reader, Stamm’s prose (happily!) rarely poses any serious issues – although you might want to have a dictionary handy for all the Alpine vocabulary…

Overall, Weit über das Land is an enjoyable read in which one snap decision leads to two people reassessing the way they have led their lives up till now. While Astrid wears her heart on her sleeve, Thomas, for the most part, is happy to just keep on walking, but occasionally we do catch a glimpse of his true feelings:

What was the point of it all? In the daily bustle there was no time to ask themselves questions like that, perhaps they were afraid of them, or they had realised that these questions had no answers and should, therefore, not be asked. ***

Seen in that light, Thomas’ flight may well represent his attempt to find that time and work out exactly what he wants from his life. I’m afraid that’s as much as I’m prepared to tell you, though – whether he finds it or not is something you’ll need to find out by reading the book😉.

*** All translations into English are my own, unworthy efforts😉

This review was originally published on Tony’s Reading List on 4 April 2016.