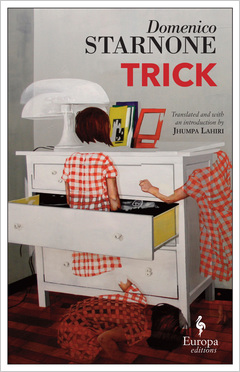 Trick, the latest offering in English from Domenico Starnone, one of Italy’s most renowned writers, and translated expertly by Jhumpa Lahiri, follows a few days in the life of a well-known elderly illustrator, Daniele Mallarico, who, at his daughter’s insistence, travels to his old childhood home in Naples to look after his four-year-old grandson, Mario, while the parents are at an academic conference. Daniele has some work to finish – illustrations for Henry James’ The Jolly Corner, a celebrated ghost story; the deadline is approaching fast but progress is slow.

The action of Trick takes place in a cold, dark November. Daniele dislikes the apartment where he is staying: it is cold, uncomfortable and steeped in shadows, the wind howls outside, and he is haunted by memories from his past there. The only people he sees are the rude and hostile neighbours. He also feels weak and vulnerable – he is worried about his future, his work and his health, and is anxious about dying. Having lived for many years in seclusion, devoting his time to his work, and having, only recently, spent time in hospital after a health scare, being obliged now to care for his grandson is neither an easy nor a welcome task.

The novel covers the interactions between grandfather and grandson during their four days together – the growing tension between them and the way the relationship switches between affection and hostility, intimacy and distance. The boy, Mario, is precocious, clever and demanding of his grandfather’s time and attention. He issues commands in an ‘instruction manual’ voice, and is ‘physically as strong and lively as his grandfather is frail and clumsy’. He repeatedly outwits his grandfather, making him irritable; but he also copies him, which both pleases and annoys Daniele.

Starnone imagines this relationship masterfully, making it nuanced, surprising and unnerving. Jhumpa Lahiri in her introduction compares the novel to Lord of the Flies:

‘the island swapped for an apartment in Naples, the repercussions every bit as savage. Grandfather and grandson are marooned together, also pitted apart; both are essentially abandoned by the adult world.’

One is entering the world, his star is in the ascendance, the other slowly exiting it.

Daniele’s work on The Jolly Corner is important here; the two books – Trick and The Jolly Corner – illuminate and echo each other. They both describe the fear of returning to one’s place of origin and confronting ghosts of the past, and both deal with issues of resemblance and interchangeability. Trick ends with an illustrated artist’s diary that completes the main story but also reinforces its ambiguities, linking James’s and Starnone’s stories together. Jhumpa Lahiri’s fascinating introduction clarifies many of these connections and also explains some of the complex translating choices she made. A joy to read and to reflect on, it is especially illuminating to read after reading the novel.

With or without reference to Henry James, Trick is full of analogies and references, and can be read on many levels: as a study of a relationship, as a reflection on old age and dying, and on heredity and artistic creation. It is also incredibly suspenseful, the reader’s curiosity growing as the tension mounts between the characters.

Visceral and layered, witty and melancholy, Trick is a serious literary achievement that has made me reach for more of Starnone’s books. Out of thirteen works of fiction, however, only two are available in English. But with one of them, Ties, also translated by Lahiri – we can hope for a repeat of Trick’s winning author / translator combination.

Translated from the Italian by Jhumpa Lahiri

Tasja Dorkofikis works at the Arts Council encouraging literature in translation as well as programming events at the Jan Michalski Foundation and Le livre sur les quais festival in Switzerland.