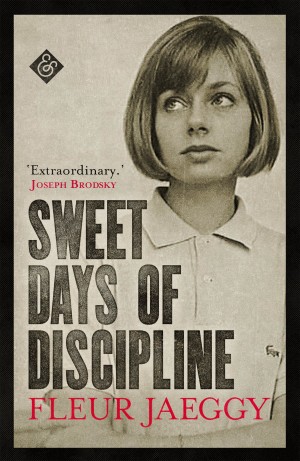 Sweet Days of Discipline by Fleur Jaeggy is simultaneously beautiful and disconcerting. Heavily autobiographical, it tells a story of a 15-year-old girl’s infatuation with her boarding school friend, Frederique. The story is set in the 1950’s in the Swiss Alps in Appenzell; the rich international school resembling a penitentiary institution where something serenely gloomy and a little thwarted is going on. The girls wash quickly, still retaining their faint mortuary smell. They are abandoned and waiting for their lives to begin, imprisoned by the social restrictions of their class and wealth, there is something crude, pedantic, and affected about it, as if we were all dressed in plus fours and long socks.

The narrator, Eve, is lonely, her mother remarried and emigrated to Brazil, and her father is indifferent and unemotional. The plot follows the wooing of Frederique, the seemingly perfect daughter of a Genevan banker, by the narrator. The relationship is intense, contemptuous and unhappy, suffused with punishment and scorn. The narrator feels unable to conquer her object. No tenderness is returned, Frederique remains aloof and indifferent. When she pays attention to the narrator it is only for them to become accomplices and disdain all the others. The narrator can only satisfy Frederique through her own submission.

There is little academic life at school. Both innocent and knowing, the girls focus on their relationships, the school being like a harem. Adults provide no guidance and the only certitude is offered by the routine and discipline of school life. To the narrator, these years were not without appeal: And perhaps they were the best years, I thought. Those years of discipline. There was a kind of elation, faint but constant throughout all those years of discipline, the sweet days of discipline.

And yet, despite its harshness and savagery, the novel is very beautiful. Jaeggy’s sentences are precise, measured and wounding. When describing Frederique’s mother and her apartment years after they left the school, the narrator is at her incisive and acerbic best: white napkins bear the initials of the dead, people on portraits watch with lidless eyes, the lace is like icing sugar. The sickly-sweet atmosphere of death pervades the bourgeois apartment, the mother and the daughter imprisoned and still for ever. Despite the sun shining brightly over Geneva, Madame had commanded dusk. Post-war Mitteleuropa does not leave much space for happiness. Haunted by the destruction and death brought by the world wars, bourgeois rituals are void and futile.

Deprived of any sentimentality or nostalgia, the novel reveals the unsettling nature of early infatuations, the secluded and claustrophobic atmosphere of boarding schools and the potential for profound unhappiness in teenage years. It’s a heavy read with its repetitiveness and lacerating phrases and reality, without lightness and relief. The novel though is endlessly quotable with a wealth of memorable words and images. Fleur Jaeggy is a Swiss-born Italian writer. Tim Parks does a wonderful job translating these cutting, sharp sentences and making the reader marvel at their perfection.

Translated from Italian by Tim Parks

Tasja Dorkofikis works at the Arts Council encouraging literature in translation as well as programming events at the Jan Michalski Foundation and Le livre sur les quais festival in Switzerland.