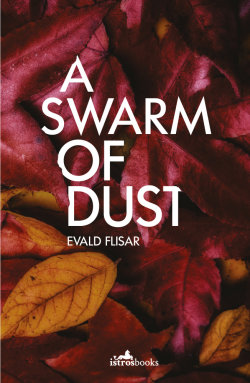 A Swarm of Dust is the second part of Flisar’s unofficial ‘Village Trilogy’, all of which have been published by Istros Books (My Father’s Dreams, Two Loves; One Death, in association with Peter Owen) and all of which are set in an un-named Slovenian village, not unlike the one in which the author himself grew up.

Having grown up with ‘a terrible secret’, the protagonist, Janek Hudorovec, leaves his familiar rural surroundings and heads to university in the city. Although this ‘terrible secret’ is made obvious to the reader at the very start, Flisar’s depictions of Janek’s perceptions – his shifting consciousness and his inner state – are mesmerising. The violence of his story is brutal, yes, particularly for a woman reader, perhaps, but this forms part of the inexplicable inner force that arises within Janek. He’s like an idiot savant, seeing through social structures and pretences – ‘the game’, as he calls it at one point. Unlike most people, though, he’s not prepared to play by these rules, possibly because his inner world is too intense, vigorous and overwhelming, or because he just cannot see things in the same way others do – his world-view is just too different.

In the city, people try to ‘understand’ him and life is reasoned and enclosed, but he feels unbearably constricted by this. Evald Flisar has a wonderful ability not just to describe Janek’s interior experience but also to use the outer world to express it: in the city, the rooftops, the people passing in the streets, the cars, a café, all are used to convey constriction, limitation and claustrophobia. By contrast, in the countryside, in nature, the wind blowing in the trees and the textures of the bark, the landscape and the changes of light depict Janek’s shifting moods and perceptions, his almost mystical apprehension of nature. The reader feels this expansiveness and changeability. And even if Janek doesn’t always understand nature’s energies, he can relate to them.

This book raises profound questions about the essence of our being: about how much or how little we are rational, and about the nature of the impulses arising in us that we can’t explain or comprehend; about what extent to which our lives are ‘destined’ and what level to which our early experiences shape us. But the novel goes deeper than modern psychological explanations of behaviour – and as in all the best art, it does not provide a simple answer to these questions.

As a reader, I was struck by Flisar’s engagement with a different kind of consciousness from the one we are used to – the ‘normal’ one, which brings with it an understanding of the usual taboos and of what is right and wrong. In some ways the novel reminds me of Zen and the Art of Motorcycle Maintenance by Robert Pirsig, which also deals with an attempt to grasp intellectually and conceptually what life and its meaning is, an effort that leads the main character to a breakdown, an overflow of emotion, and then – after a medical intervention – a haunting, perhaps by his former self; the ‘Self’, as Jung would call it, which is so much more than the everyday, rational, rule-keeping being. If we obediently play by the rules, Flisar seems to ask, what do we do with our profound fears and desires, which seem to have a different agenda?

Flisar’s title perhaps hints at the fundamental theme of the book, best summed up in T.S. Eliot’s ‘The Wasteland’: ‘I will show you fear in a handful of dust’. We all have fears, but where do they come from; were we born with them; how do we deal with them, and is it possible to heal them and / or be free of them? Like all good literature, the questions that this book evokes in the reader go on after it has been read…

A SWARM OF DUST

Translated from the Slovenian by David Limon

Morelle Smith is a writer of poetry, fiction and travel articles, with a particular interest in the Balkans, where she has worked as English teacher and aid worker. Her most recent books are the poetry collection Shaping the Water Path (diehard, 2017) and Open Roads and Secret Destinations (Bibliotheca Universalis, 2016) a collection of travel articles. Blog: https://rivertrain.blogspot.co.uk.Twitter: @Morellesullivan