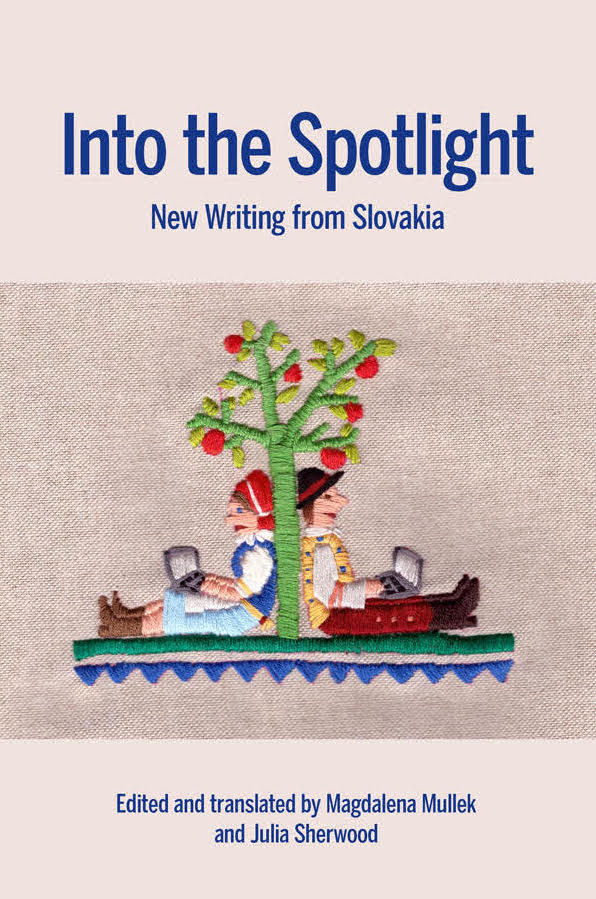 The cover of this slender anthology says it all. It looks like an embroidered piece of naïve art: A boy and a girl in folksy attire sit under an apple tree. But look closer and you will notice a laptop on their knees. Slovakia, the illustrator Ivana Šáteková indicates, is not a rural idyll in the backwaters of the European Union. On the contrary, the country consciously scoffs at tradition and worships modernity.

And the point is proven by sixteen award-winning living Slovak authors, thoughtfully selected and seamlessly translated by US-based Magdalena Mullek and UK-based Julia and Peter Sherwood. Postmodernism, magic realism and feminism rule the day. Lukáš Luk is the only one harking after old rural ways. Pavol Rankov is the only one to set his story back in Communism. The rest deal with the issues of the third millennium: ‘turbo-capitalism’ and the excessive consumerism of the post-communist society (Hvorecký); the exploitation of the Roma community by usurers (Staviarsky); housing shortages and the resulting plight of the unwanted elderly (Kompaníková). Or they go for the exotic: Marek Vadas, former advisor to the King of Nyenjei in Cameroon, comes up with a surrealistic tale inspired by African healers in which bodies and souls are swapped for medicinal benefit.

Seven out of the sixteen authors are women reflecting the male/female balance in current Slovak literature. As a result the book provides insight into Slovakia’s standing on the relationship between sexes.

Dušan Mitana, known for his wild escapades as well as for his exquisite narrative skills and humour, offers a wet-dream fantasy of sex with an unknown woman on a crowded tram. The besotted woman traces the protagonist down, announces their engagement, is eager to cook for him and even bears him a child (conceived on the train) while he only wants to repeat their copulation and send her on her on her way. Interestingly, villains in the story are old crones – perhaps a dig at ageing woman.
Is Mitana serious in this story or is he sending up Slovak male chauvinism? Meanwhile, in his story, Hvorecký says that the shop assistant’s uniform in this part of Europe amounts to miniskirts and low-cut blouses, and, in Staviarsky’s tale, a Roma father uses his daughter as a commodity to pay his debts.

No wonder that the female writers in this anthology speak in a united feminist voice: a woman’s life consists of being all day at somebody’s service, which leads to the abuse of anti-depressants and alcohol (Šikulová). Men are as lazy as lice, are scared shitless that a woman would ask them for anything tangible and are convinced that the only thing a woman expects from life is to have sex with them (Cigánová), while in reality women might lust after their cleaning ladies (Dobrakovová), and are perfectly able to have their emotional and physical needs satisfied in a lesbian affair (Beňová). Kovalyk goes as far as to attack a sacrosanct subject in this Catholic country with its Marian cult: motherhood. In her story, a young mother only finds respite from her stultifying routine by wandering the deserted streets at night and imagining body-awakening magical adventures – a far cry from Pavol Rankov’s story on a self-sacrificing young Slovak mother.

But it is Balla (he uses only his surname), who will be most remembered for expressing the unspeakable. His protagonist, who is about to be jilted, oscillates between hatred, rage, humility and attempts to gain sympathy by clowning about and exposing himself to his girlfriend, as his exposed private parts would draw attention away from his general shapelessness, limpness and flabbiness, while his mind conjures up images of past humiliations meted out to him by the entire world. The accuracy and depth of Balla’s observation is almost too embarrassing to read. It’s no wonder that Balla has been dubbed ‘the Slovak Kafka’. In the Name of the Father and Other Stories (transl. Julia and Peter Sherwood), Balla’s first book to appear in English, came out in the UK in May with Jantar Publishing and was reviewed here by Rosie Goldsmith. Another Balla translation is now in the making. The best of Slovak contemporary literature is finally making headway in the English-speaking world.

Into the Spotlight. New Writing from Slovakia

Published by Parthian Books (UK) and Slavica (US)

Translated by Julia and Peter Sherwood (UK) and Magdalena Mullek (US)

Zuzana Slobodová was born in Slovakia and emigrated to Britain in 1968. She studied at Comenius University in Bratislava and the University of Oxford, then worked at BBC World Service. She contributes to the Times Literary Supplement and has also written for the Guardian, the Independent and the Daily Telegraph, as well as for various publications in Slovakia and the Czech Republic. Together with Milan Kocourek, she is the co-author of Česko-slovenská Británie, 2006.