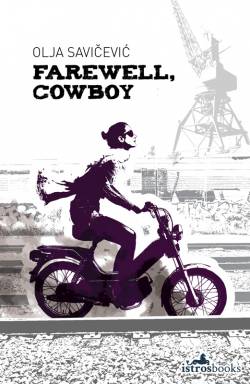 Post-millennium Croatia is the setting for Olja Savičević‘s brooding, bleak novel Farewell, Cowboy, translated by Celia Hawkesworth, charting the story of a young woman’s return to uncover the truth of her brother’s death years earlier.

Rusty (or ‘Dada’ as her family call her) returns to her hometown, to Split. It is stale and rotting, decaying and despondent: “my hometown: nothing more than a vast rubbish dump… glorious dust, heavy metals in the air, excrement and pine woods”. The inhabitants are stewing in their juices, being invaded by tourists looking for the fake rustic lifestyle and new-money gangsters building superficial palaces by the sea. As one inhabitant, Herr Professor, says, “this town is like an illness”.

The Old Settlement shows that, regardless of the bars, hotels and shiny, bright riverfronts, Croatia cannot escape from its dark heart and its dark past. Like Rusty’s mother, people are paralysed by the past, feeling abandoned to rot in the aftermath. They feel left behind while the new Croatia has marched on becoming part of the global set, mixing with the beautiful people, “cut off like on a lilo with sharks circling round it”.

Rusty returns home. Her mother, destroyed by the death of her son, survives on prescription drugs and a daily pilgrimage to tend her brother Daniel’s grave. Rusty lost her father when she was young but it was her father’s love of cowboys, ‘proper cowboys’ and ‘proper Indians’, that shapes her memories and defines the motifs in the novel. Rusty is the stranger riding back into town looking for answers. Her bedroom is still covered in cinema posters; a cowboy film is being shot on the outskirts of the town, starring an iconic but washed-up hero of her father’s. The film forms the last section of the book, reframing the narrative, injecting momentum into its final pages. It opens out to draw in many of the minor characters who lurch towards a destructive climax where life-imitates-art and the consequences deadly.

Farewell, Cowboy drips with a festering, lingering violence. From the violence of the language to the violence of the weather: the unrelenting sun beats down fiercely, with people wilting, roads melting, destroying plant life; things rotting and putrid. Just like the Herr Professor’s pets, the inhabitants of the town are trapped under a burning microscope and “He smiles like a pile of gelatine”.

The novel doesn’t deal directly with the Balkan War, it is hardly referred to, but it haunts the novel. Savičević’s characters deliver a withering critique of humanity’s desire for violence and war: “you’re presumably not so stupid to think that people do bad things because of some childhood trauma, religion, doctrine?… The rabble can hardly wait for a war – like a sports match – to let off some steam.”

Farewell, Cowboy is driven by its female protagonists, subverting the motifs of a western film. Women like Rusty, her sister, her mother, to Maria, mocked at school but who, in her madness has the last laugh. Even the enigmatic writer who befriends Rusty on the train out of town. By contrast the male characters are broken, inert, helpless and hopeless: her brother’s dreamy radiance leaves him incapable of fitting in; Herr Professor has given up; even the gigolo Angelo is impotent.

The novel also shatters the cowboy film myth of ‘good and evil’. This realisation shapes Rusty’s personal journey. Her coming of age consists of her coming to terms with her past, saying farewell to her childhood and her small town. As her sister says, “Small places is good while you’re small. Later they cut you down to their own style.” But Savičević is ambivalent again about whether we can find resolution and redemption from the stories we tell: “memory is the saboteur editor… reframing until the end”. Likewise she questions if we can ever move on: “the past endures, everything that once happens goes on simultaneously”.

Farewell, Cowboy could make for an unrelenting read but the precise, poetic language, the sparks of humour, surreal imagery and the razor-sharp portrayal of a community lost within itself add up to create a powerful, moving reading experience. It’s a novel that contributes a different perspective and heralds a positive shift forward in the growing canon of literature from Croatia and the region.