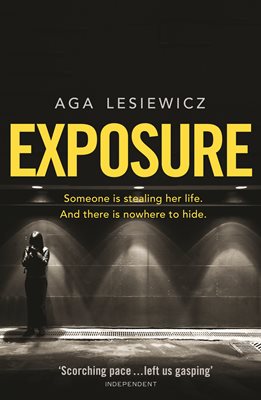 The author of Exposure is Polish but she lives in the UK and writes in English. And this is a very English story, set among the gentrified warehouse conversions of east London, with its colonies of artists and media luvvies.

The first exposure is a forensic shot she took of a corpse – the victim of a serial killer called The Violinist. Apart from its being hacked, there is nothing untoward about it, except it’s been photoshopped to add a disturbing graffito. From this point on, Kristin’s life moves onto shifting sands, as more exposures appear – one of which is sent to a client, who very quickly becomes a former client. Indeed, a Pelion of exposures, revelations, a peeping tom and much else besides, is piled upon the Ossa of her waning self-confidence and the growing realisation that the implied threats against her are very real. But what’s the motive? Whom has she so angered to provoke this? Or is it just random?

Exposure is a psycho-nightmare with all the visual qualities of a good TV thriller, written in an episodic style that conveys the increasing speed with which events take over Kristin’s life:

“I’m trapped in a spiral of endless questions that wind tighter and tighter around me … I can’t stop thinking about the King’s Cross encounter … I feel a stab of anxiety looking at the picture … Was he the cyclist who knocked me down on the towpath by the canal?”

When she finally meets herself face to face in a secluded courtyard in Stratford, and the last exposure arrives, she realises who her tormentor is – and what they intend to do to her.

The tension in Exposure builds inexorably to the dénouement; but surprising and unexpected though it is, there was, for me, just too much of the “Poirot-assembling-the-dramatis-personae-in-the-library-and-revealing-all” about it: too many loose ends are conveniently wrapped up when the perpetrator does the least-expected, out-of-character thing, and Kristin’s elderly Aunt Vero and her Chinese computer-geek lodger charge in, cavalry-style. I was not entirely  convinced. This high-tension, white-knuckle ride of a book needs something a bit more credible at the finishing line. That said, I enjoyed the ride: it’s atmospheric, the characters are well drawn and there’s enough detail about the locations and events to give a satisfying sense of place. Maybe I expected too much at the end, but thrillers are a big-business, competitive genre, and I did feel increasingly infuriated at Kristin’s refusal to take her case to the police. But they might not believe a word of it, says Kristin! Quite so – and that would have given the ending the extra fillip of believability it needed.