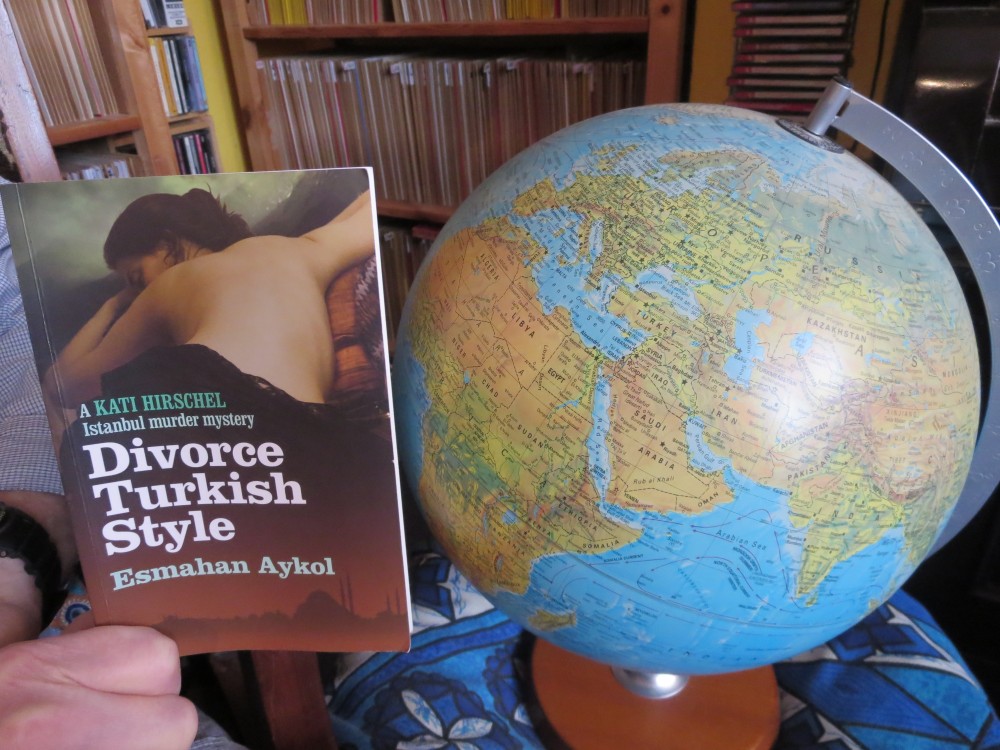 Divorce Turkish Style is the third Kati Hirschel mystery (all three are available in English from Bitter Lemon Press), a fact made clear several times during this book, when Kati reminds her “dear readers” of her numerous shortcomings and foibles, not least her constant desire for cigarettes, which she has now foresworn. An irritating and old-fashioned device, but let that pass.

The author Esmahan Aykol is a Turk, who divides her time between Istanbul and Berlin; her protagonist, Kati Hirschel, is a German who’s lived in Istanbul for long enough to give us some intriguing insights into both the country and the city, where she runs its only crime bookshop. She’s also an amateur detective and is aided and abetted in her sleuthing activities by her flat-sharing male colleague Fofo, who is as gay as she is straight and can be as mischievous as she can be po-faced. Their banter and arguments are a leitmotiv throughout the book, as are her penetrating and at times priceless comments on the people she interviews and the places they live in:

The brasserie’s clientele consisted mainly of Nisantasi ladies… [who] whether fifteen or seventy, looked amazingly similar, with noses fashioned by the same cosmetic surgeon, swollen pouting lips and identical facelifts. They… bore the signs of Botox injections, subcutaneous vitamin cocktails and several tanning sessions a week… I was repelled by skin burned orange on a sunbed.

She worries about the size of her bottom, but acknowledges that Turkish men like women that way; nonetheless, she excoriates them mercilessly:

Taking courage from each other like ancient warriors, they’d set out on the prowl in groups of at least three, pestering any single woman they encountered… pushing and shoving each other, to ogle, assault and terrorize the women. By dark, they’d be on the bus home, where they held themselves responsible for the honour of their mothers, sisters and wives.

At this point in her story Kati is without a partner and frequently laments her single status; she has a large mortgage to pay off and a business that isn’t exactly a money-spinner. She is, in other words, your average, mixed-up, 21st-century professional.

The mystery in Divorce Turkish Style concerns Sani, a young woman environmental activist, who’s in the middle of a divorce and is found dead in her house from what is pronounced to be an accident. But Kati is persuaded by Fofo, after some initial hesitation and worried glances at her bank balance, that she should put work on hold to investigate this ‘accident’: and so unravels a tale of unscrupulous factory owners, who pollute the Ergene River basin; Thracian nationalists, who may stop at nothing; Sani’s engaging husband, who may not be quite what he seems; her sister, who is probably too helpful; her former lover, who lives just across the street; and her mother-in-law, who, like most Turkish women of her class, is both strong-willed and fiercely protective of her son. There are blind alleys and red herrings a-plenty, interspersed with Kati’s reflections on the habits, good and bad, of her friends, foes and acquaintances, on the appalling state of Istanbul’s pot-holed streets, and on her sparring-partner relationship with Detective Commander Batuhan, who impatiently dismisses any suggestion Sani’s death is suspicious.

The denouement is surprising and – without giving anything away – does not quite count as murder. But, dear reader, I will say no more and leave you to work it out for yourself – if you can.