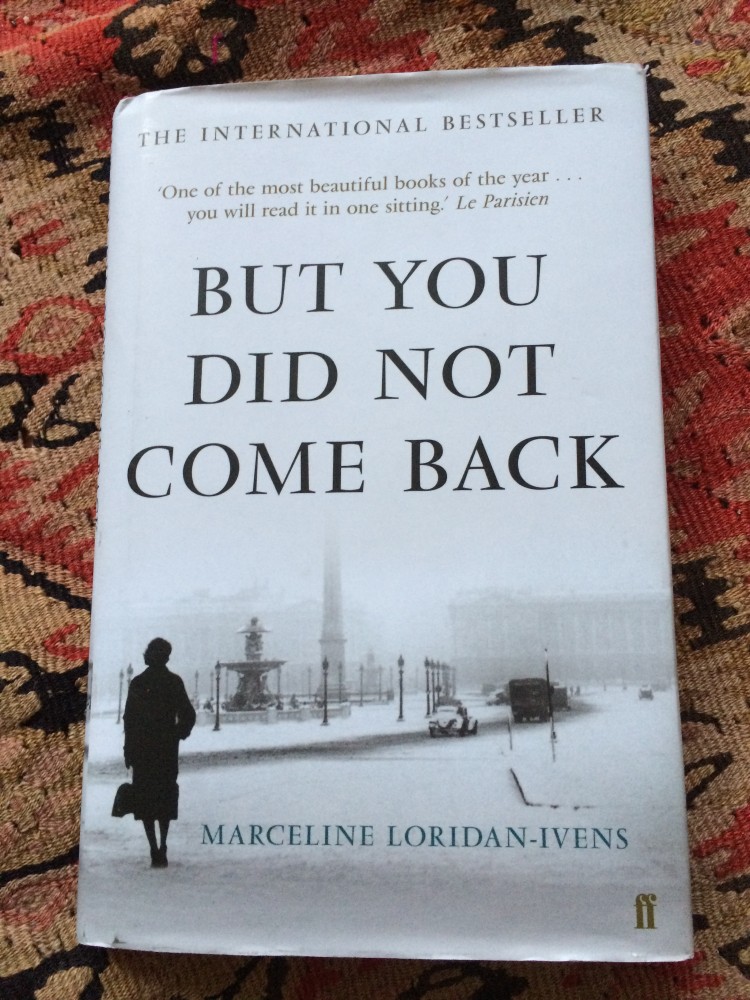 #RivetingReviews: Henrietta Foster reviews BUT YOU DID NOT COME BACK by Marceline Loridan-Ivens

But You Did Not Come Back

But You Did Not Come Back is the phrase that Marceline Loridan-Ivens has said everyday of her life to her father Szlhama (Schloïme) Froim Rozenberg. Father and daughter were deported from the South of France in late 1943. They went first to Drancy and then on April 13, 1944 in Convoy 71 to Auschwitz-Birkenau where they were separated. This slim memoir is the latest of Loridan-Ivens’ attempts to explain to the rest of us what it is like to be deported at fifteen with a much-loved father and to come back alone. Her father died at Gross-Rosen in 1945. It is her portrait of life in Auschwitz-Birkenau and of her subsequent life in France as a survivor. For her readers it is a privileged and deeply personal insight into what it means to live on a daily basis as a survivor of the Holocaust. The daily fight against giving into the overwhelming memories of loss and death. I can think of no other survivor who has been so generous and relentless with her own personal tragedy.

The first time that Marceline Loridan-Ivens tells her story is in Jean Rouch’s 1961 new wave documentary Chronique d’un été. She appears in it as a dynamic, elegant, tiny young woman with the bobbed hair that she sports to this day. At first we see her asking Parisians if they are happy and then dancing un slow with her boyfriend in a St Germain club. Towards the end of the film all the young people in it are sitting around a table with Jean Rouch on a terrace. They are drinking espressos, smoking Gauloises and talking politics. At one point Rouch asks one of the Congolese students if he has noticed that Marceline has a number tattooed on her left arm. He says that he has but he does not know what it is. His friend adds that he thought only sailors had tattoos and that ‘78750’ is too short to be a telephone number. Marceline explains that as a French Jew she had been deported to a concentration camp during the war. The faces around the table change to fear and embarrassment as they try to comprehend what she has lived through.

The film cuts to the young Marceline alone in a light coat and little high-heeled pumps walking across a deserted Place de la Concorde. A fragile presence lost in her own memories. She is talking to her father. She remembers that he said to her, you are young, you will return but I certainly will not and of course he was right. She tells him that she came back and he stayed there. She remembers the last time she saw him. They had both been in the camps for six months. One day they suddenly saw one another and threw themselves into each other’s arms. They were separated by the SS who started beating them up. Her father cried she is my daughter, she is my daughter, but to no avail. Her father put an onion and a tomato into her hand, and before she fainted, she told him she was in Block 27B. We then cut to Marceline walking in the old Les Halles. She says to her father that she loved him so much that she was almost happy to be deported with him. The camera moves away from her and she becomes even smaller. Her voice breaking she says Papa, what I would not give to see you now? It was so hard to come back and see the family without you. I had a heart of stone. Only her little brother recognised her…

1960 was only fifteen years from the end of the war. 66 years later the pain that we hear in Marceline’s voice and the lost look in her eyes are exactly the same. Just as fresh and just as present in her book But You Did Not Come Back. For over 25 years Marceline was married to the eminent Dutch filmmaker Joris Ivens. Throughout the course of their marriage they worked together. His death in 1989 meant that she was able to confront her own past once more. It was also a time when it became possible for the survivors of the Shoah to talk about their lives in the camps. First she wrote a memoir called Ma Vie Balagan and then she directed a feature film known in English as The Birch Tree Meadow and starring Anouk Aimée as a survivor returning to Birkenau.

And still it would not leave her. She has said I will never feel that I can exorcise this: I am still the same. Her last memory of her father is a small note that he managed to get smuggled to her in Block 27B in Birkenau. It started with, My darling little girl, and ended with Schloïme. But she cannot remember another word. She writes,

But what came in between, I don’t know anymore. I try to remember and I can’t. I try, but it’s like a deep hole and I don’t want to fall in. So I concentrate on other things: where did you get that paper and pencil? What did you promise the man who brought me your message? That may seem unimportant today, but then, that piece of paper, folded in four, your writing, the steps of the man walking from you to me, proved that we still existed. Why don’t I remember? All I have left is Schloïme and his darling little girl. They were deported together. You to Auschwitz, me to Birkenau.

After months of hiding it, she lost the note in the camps. She does not know where. The last words that her father wrote to her are irretrievably lost but I know all the love those lines contained. I’ve spent my entire life trying to find that love. Their relationship is there and always will be there in the words that she can remember – my darling little girl and Schloïme. The only words that matter because they say so much.

But You Did Not Come Back concentrates on the fractured lives of the survivors and their families. Her mother did not go to meet her daughter in Paris and later her first question was Were you raped? Are you still a virgin? Marceline resented her mother and her preoccupation with an antiquated version of family honour. Two of Marceline’s siblings committed suicide. She has tried to kill herself more than once. No one wanted to know what had happened to her until she met Jean Rouch. The book ends with Marceline asking Marie, her sister-in-law who was also deported, whether they should have come back from the camps. Marie says no. Marceline agrees with her but hopes that on her deathbed she will think that it was worth coming back after all.

I had wanted to read the memoir in French but could not find a copy in London. Sandra Smith’s elegant and profoundly sympathetic translation more than made up for my regrets. This is a book that demands to be read, and at one sitting. Anything else lacks a certain respect for a truly remarkable woman.

Tags: marceline loridan-ivens • european literature network • but you did not come back • sandra smith