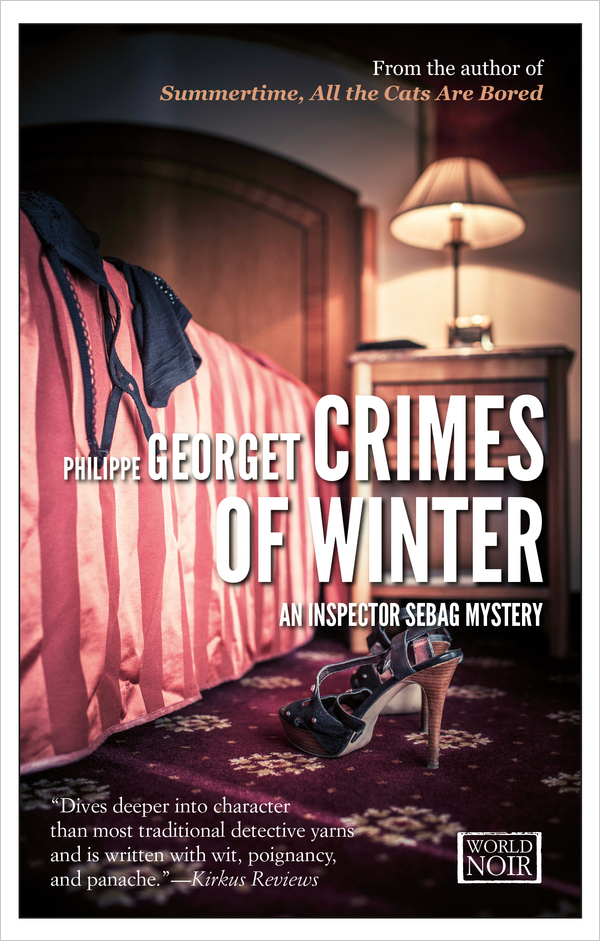 In a crisis, there were two types of people: those who explode and those who implode. He was undoubtedly one of the latter.

“He” is Inspector Gilles Sebag of the Perpignan police department, praised by both his boss and his colleagues for his ‘legendary flair’ in solving cases; his “crisis” is to discover – not through flair but by the simple expedient of looking at her text messages – that his wife has been cheating on him:

His experience as a cop had taught him that today there is no better confidant than a mobile phone. And no worse traitor.

He struggles to reconcile his wife’s infidelity with her assurance that the affair meant nothing and that he is still her only, true love. But his inner turmoil means his flair begins to desert him, and he goes AWOL at the very moment a new wave of crimes breaks out in Perpignan: crimes of passion and adultery that mirror his own collapsed world. In fact, Perpignan, if not the whole of France, appears to be drowning in a tidal wave of infidelity… half of married men and one in three women admit to having affairs but many insist they still love their partners. These facts do nothing to calm Sebag’s mind. Nor do they even begin to explain why, in Perpignan, one cuckolded man calmly shoots his wife, whilst another leaps to his death off the balcony of their home. Isolated incidents – or part of a pattern? Someone thinks the shooting is the perfect crime…someone we know only as l’Oeil – the Eye.

This story is true French noir, but marked, as is often the case with the best writers from Latin-language countries, by a strong philosophical basis, as well as throwing an interesting light on attitudes within the French police force…for instance, a bout of verbal sex-play between one of Sebag’s colleagues and a young forensic analyst that would almost certainly end in a disciplinary hearing in a British context:

“By the way, do you have a boyfriend?” Elsa sighed loudly. Jacques persisted: “I ask because when we sleep together, I’d like to know if I need to keep my gun handy.” “Don’t worry, that won’t happen.”… “You’re right: I prefer younger women… How old are you, by the way? Over thirty?”

From that point, the exchange goes even faster downhill! In another context, what might have been, in less capable hands than Georget’s, a lumbering disquisition on why a woman who claims to be deeply in love with her husband would risk everything for a few furtive lays, is handled with a candid lightness that seems in no way out of place in a thriller like this. And later, Sebag ponders the reason for his loneliness in the face of his wife’s treachery – ending with a fine self-administered put-down much in the style of Heinrich Heine:

…People surrounded themselves with families, thinking they were building a continent. All they created was an illusion. We remain icebergs, clinging to each other, shivering, and at the slightest storm… we resume our perpetual drift across a frosty ocean. He took another swig of whisky and expressed his desperation in a solemn burp.

Georget manages more than once to handle with aplomb the difficult transition between the high philosophical and the earthy, whilst maintaining the tension right to the end. Sebag’s travails underpin and indeed drive the storyline, until he makes a decisive move to clear his mind of his own problem in order to solve the mystery of who is behind Perpignan’s spate of adulterous violence. His flair comes back and the mists clear. Meanwhile, his boss, the Superintendent, beset by demands to improve his clear-up rate, is delighted:

At least a hundred criminal acts revealed and resolved at the same time. That’s excellent for our statistics. The year is beginning well!

However, Sebag, one sees, is less gung-ho:

Despite his fine ideas…down deep he thought of fidelity as like virginity. Once you’ve lost it, it’s gone forever.

This novel is never less than an intriguing read: its twists and turns keep the suspense level high. But if I have one criticism to make, it is that, while the translation – by Steven Rendall and very obviously written for the US market – is coherent and flowing, it sometimes wanders too far in the direction of Americanisation. Georget’s finely-crafted realism, the atmosphere of a Mediterranean winter, of northern Catalonia, its politics and its food poised between the Gallic and its increasingly rebellious Spanish neighbour province, is not helped when policemen refer to women as “broads” (to offer just one example): in New York, yes, in Perpignan, non!

Crimes of Winter – Variations on Adultery and Venial Sins

Translated from the French by Steven Rendall

Published by Europa Editions UK (May 2017)