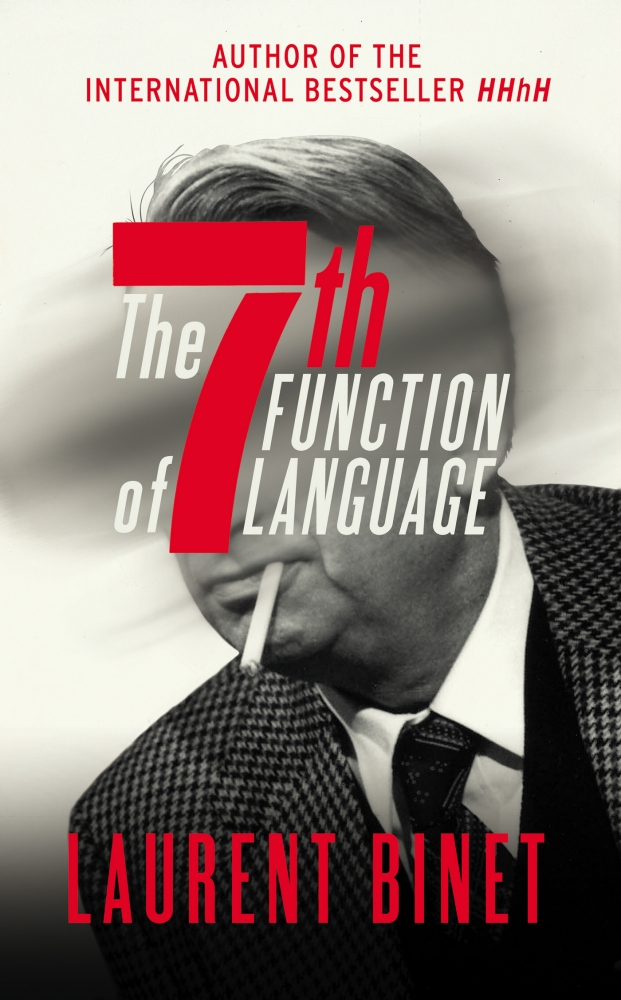 What is the purpose of this book review? What is a book reviewer?  Maybe it is a reader who is given unspecified entitlement to try to find meaning in a novelist’s writing and then share it with other readers? A novelist who has interpreted the world through their words, a novelist who has assumed we will interpret those words with the same meaning and symbolic significance that they do.

Layer upon layer of meaning, interpretation, signs and symbols, where reality shifts and the ‘truth’ begins to appear in quotation marks: this is the world of Laurent Binet, the much acclaimed French novelist whose second novel The 7th Function of Language has just been published after the major success of his debut, HHhH. It’s published in the UK as France elects a new president: a novel set in the time of the French election of 1980 culminating with the final TV debate between Mitterrand and Giscard. Symbolism or coincidence? In Binet’s world it is both, depending on who is doing the interpreting.

It begins in that historical moment when the great semiologist Roland Barthes, a man who in 1980 expresses the spirit of our times is knocked down by a laundry van after lunching with Francois Mitterrand. Binet takes this accidental moment and flips it and wonders what if it wasn’t an accident after all but, in fact, part of an elaborate plot? From there, we embark on a dazzling literary conspiracy thriller, a Pynchon-esque whirl through the literary and cultural worlds of Paris, Bologna and Ithaca, featuring drug-scoring gigolos and umbrella-stabbing Bulgarian spies mixing with the intelligentsia and cultural elites.  In amongst this, a down at heel cop, Jacques Bayard, and a seemingly second rate academic, Simon Herzog, attempt to decipher the meaning of Barthes’ death and uncover the 7th Function of Language to stop it falling into the wrong hands. The six functions of language are known but this 7th could have the ability to change the world, when words will wield real power. As one character says, one governs not by force but by fear… fear is the product of speech about force. Words are weapons.

It is a breathtaking literary performance: we meet a cavalcade of iconic figures who have defined literary theory: Foucault, Althusser, Derrida, Kristeva, Eco and many, many more. No one is safe in the hands of Binet: Kristeva is a spy, Eco the head of a secret society, the Logos Club, where linguistic duels end in the loss of fingers (and more in one painful case). It made this reviewer wish he had paid a little more attention in his 9a.m. literary theory class, as theories are here expounded and argued, vilified and satirised.
The novel captures a time of intellectual energy in France when there may not have been great novelists but there were masters of discourse: the best thing we have produced is a way of explaining what others have said or have done. The novel may satirise the world of academia – Bayard angrily mocks work-shy lefties… paid to spout a load of woolly nonsense. Episteme, my arse, but it’s also a celebration of the intellectual, of the pleasure of interpretation… the semiologist walking down the street detects meaning where others see events. It highlights their importance in maintaining this meaning against the surrounding political forces: when an intellectual triumphs over the powerful, even posthumously, the world changes. A man earns the name of the intellectual when he gives voice to the voiceless. This last point is incredibly relevant to our times when populist politics attempts to drive a wedge between the intellectual and the community.

Binet is being deliciously mischievous in this novel and proves what an astonishingly gifted writer he is. The story bubbles with narrative delights, comic capers and brilliant set plays. While having this fun, Binet is challenging the reader: does historical fiction have to be loyal to the truth? What is the writer’s responsibility to the facts and the people of history? And what difference does it make to those responsibilities if those people are still with us? It’s said those still living and portrayed in the novel aren’t too happy with their new fictional lives.

Herzog himself feels more and more that his life is becoming like a novel with the voice of the author appearing in and out of the text. What is the difference between the story of real life and the story of a fictional life, and how and when do the rules change? And, most importantly, why do we continue to turn to fiction to decipher the facts of life? As one old lady duellist at the Logos Club puts it, a writer is someone who restores logic where randomness, madness and mystery seem to reign.

Binet cleverly uses the stylistic structure of the detective novel: like semiologists, detectives look to find answers in signs and symbols; Herzog the academic turns out to be a better detective than Bayard. And as with detectives, we look to writers to make meaning of the world around us. Our fictional theoreticians busily argue the complex intricacies of symbolic interpretation while failing to see the obvious signs that they are in mortal danger as enemies close in.

Throughout the novel, various tennis matches play out in the background featuring the master players of Borg, Connors and McEnroe. The symbolism of the sport, with its repetitive, combative toing-and-froing echoes throughout the novel from duels at the Logos Club to presidential debates. Call it what you will – head to head, tête-à-tête, versus – it is the conversation and connection between two people and how each interprets and responds to the other’s meaning that is a core element of the novel. It resonates further with the duos of Bayard & Herzog (our Watson & Holmes) and Kristeva & Sollers, and the relationship of fact to fiction, reader to writer.

Binet is saying that everything is a game, but the game is serious…and this game deciphers the world around us and gives meaning to our existence. And like all games, there are rules. But then that is just my interpretation.

The 7th Function of Language

Published by Harvill Secker (May 2017)