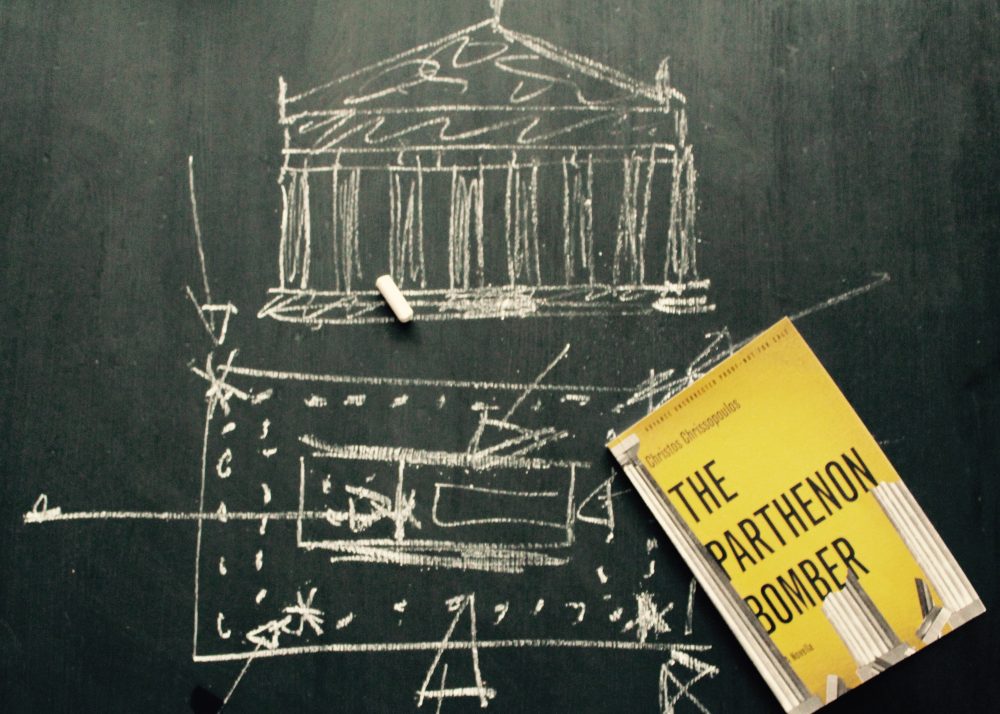 The Parthenon Bomber by the Greek writer Christos Chrissopoulos, is one of those novels that make you think you’ve missed some very big news. The Parthenon, it’s still standing, right? Hasn’t been bombed, has it? A replica perhaps? I’m tempted to Google.

These questions may betray a naive reader prone to a severe case of suspension of disbelief, but perhaps they reflect what this short novel is about. It depicts the unsettling of the foundations of a pre-established reality, the destruction of the enduring, stone-built emblem of a city that habitually turns to the old in search of the new, where the future is about preserving the past and nothing may exist if not in relation to that icon. The Parthenon, Chrissopoulos writes, is a place of certainty:

The ultimate refuge. Should doubt seize us, if only for an instant, should some disagreeable thought cross our mind, should the city herself be going through a difficult moment, should we be in need for any reason whatsoever, we must be able to climb up to It immediately, without problems and without delay. Because without It, there is no hope.

I resisted Google and instead clung to the book’s pages to find out what happened to “It”.

The book creates its own strange sense of reality. The Acropolis has been destroyed. It’s part case file, part series of stage-directed interior monologues complete with descriptions of settings, characters and camera angles. There are eye witness statements, a photo, manifestos and notes at the end to attest authenticity. At times at odds with this ambition for realism is the beautifully flowing prose of the English translation, which swiftly transported me from page to page. One of the final chapters, on the fate of the bomber, hints that there might be no point ‘asking Google’, or anyone, to confirm actual events, because, as the author explains, reality and fiction often merge and even eye witnesses can’t be trusted.

The Parthenon Bomber is the story of one town, one collective psyche, unsettled by the destruction of what it believed in. But if you want it to be, it can be more. It’s metaphorical. My mind turned again to the internet, specifically to the current abundance of incredibly well-manufactured fake news outlets. With gazillions of individually-tailored news streams, perhaps my reaction is my own personal bombing of the Parthenon. In the same way that certain news creators reject claims of a political agenda, the Parthenon bomber states:

I had no intention of doing harm. … There aren’t any rational explanations for it. There’s only the illusion of autonomous action; only action has meaning. I don’t represent anything. It simply belongs to me, that’s all. This act belongs to me.

As I read this novella, at times it felt like the Parthenon had exploded around me and I had to wait for the dust and debris to settle to see clearly. I was easily distracted by both the world outside the book as well as by the frequent stage directions within it. But for me its success lies in providing a glimpse of that certainty which we all long for when faced with a period of great change and with a past we can no longer rely on to define the present.

There’s an opportunity for all of us in this as, … for the first time, we have no starting point, and perhaps for that reason we’ll succeed in choosing a destination.

Translated from the Greek by John Cullen

Having moved to London after completing her English and Theatre Studies in Berlin, Katharina Schulz is passionate about linguistics, literature and translation, a combination of the three and the lens they provide to help make sense of the world. She currently works at the BBC and is busy putting the finishing touches to her first novel.