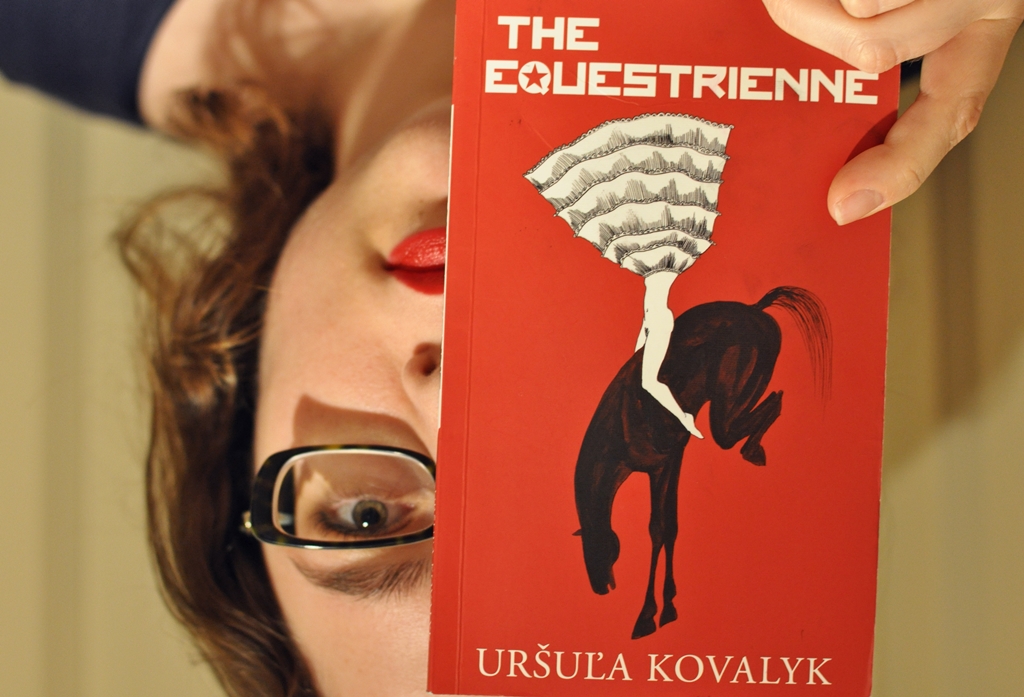 This little book – it is only 80 pages long – packs a punch beyond its size. The main character, Karolína, looks back on her childhood and adolescence, which coincided with the Velvet Revolution in Czechoslovakia. Little Karolína is surrounded by women, most of them at odds with the political regime. Her single mother, who keeps trying to find her a new dad, leaves Karolina to her own devices; her fearless and mischievous granny carries a knife, and gives Karolína her own weapon; her aunts, Juci and Márta, used to be teachers, but were fired for an insufficiently positive attitude to the socialist system.

Bullied and unhappy at school, Karolína finds herself at a riding centre, where she meets a girl called Romana and a docile horse called Sesil. The three become inseparable and Karolína discovers a whole new world of safety and freedom. With the help of a friendly trainer, Matilda, the two girls start to learn trick riding, accept their own changing bodies, and become aware of the power that comes from growing confidence and skill. The political transformation that seems to be positive for their country, however, spells sinister changes for the oasis that Karolína has created in her life.

If the plot sounds like a fairly straightforward coming-of-age story, other elements lift it beyond that cliché. First of all, it is a story of women, and women of all ages; an exploration of their friendships, animosities, relationships across generations – by turns difficult, tempestuous, and genuinely loving. Secondly, the historical and political contexts are ever-present: we see the hardships of living under a communist regime filtered through the vivid imagination of a child. Karolína is matter-of-fact about the shabby reality and the fug of odious propaganda surrounding her. In one of the gentler instances of her gleeful disobedience, she is only too happy to get kicked out of the Spartakiad team, so that she can spend time with Romana and Sesil. There is also something almost subversive in the absolute candidness with which the book refers to sexuality, bodily fluids, abuse, and death. Karolína notices (and participates in) all the highs and lows of human existence, in more ways than one: her unusual way of looking at the world provides an element of magical realism which detaches the book from overly literal readings, but will be an acquired taste to some readers.

Apart from one or two challenging moments with slang – notoriously difficult to translate – Julia and Peter Sherwood’s work canters on at a brisk pace; the phrasing of communist slogans and double-speak grates just like it should and you can almost hear the cackling of Karolína’s granny, much given to happy profanity as she is. The descriptions of the exhilaration Karolína feels while performing really do soar. The Sherwoods have preserved a smattering of Hungarian and Slovak words, glossing them deftly.

Karolína’s life, as she says at the very end, peaked at a time you’re not supposed to have anything good to say about, yet Kovalyk does not glorify the simpler times of communism. Her riotous, funny and painful parable is of a country and a girl in the throes of a revolution, of order turned upside-down.

Marta Dziurosz is a Polish <> English literary translator and interpreter, curator, and Free Word Centre’s Translator in Residence 2015-2016. She also works for Pan Macmillan and is a Free Word Centre Associate. Her writing and translations have been published by the New Statesman, PEN Atlas, In Other Words, For Books’ Sake, Asymptote, and elsewhere.