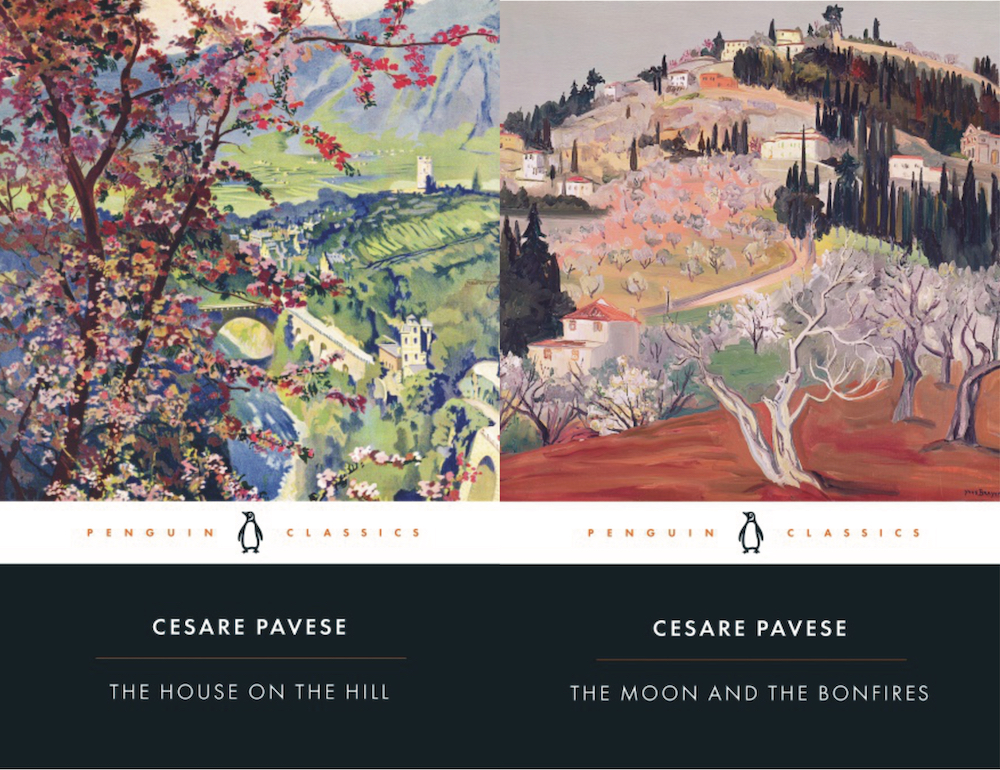 #RivetingReviews: Jonathan Levi reviews THE HOUSE ON THE HILL and THE MOON AND THE BONFIRES by Cesare Pavese

In 1954, the literary critic terrible Leslie Fiedler called Cesare Pavese ‘the best of recent Italian novelists … and the most poetic’. Although Natalia Ginzburg and Primo Levi had yet to write their greatest work, Fiedler ranked Pavese above the better-known and more successful Alberto Moravia and others who had survived to write in the renaissance following the Second World War.

Born in the vineyards just outside Turin long before the invasion of foreign gourmands chasing wine and truffles, Pavese wrote his thesis on Walt Whitman then joined the new publishing house of Einaudi, where, as a translator and editor, he introduced Italians to dozens of English-language classics, including Joyce’s Portrait of the Artist, Melville’s Moby Dick, and, more unfortunately, Edgar Lee Masters’ Spoon River Anthology, which has become a cloying staple of Italian high schools and amateur theatricals.

Pavese struggled to place himself in an Italy that itself had trouble figuring out its own identity. Although he had joined the Fascist Party in 1933 in order to secure a teaching post, he spent a year in internal exile when he was found holding letters for an anti-fascist girlfriend. In the vertiginous autumn of 1943, when the Allies landed on the mainland, the Italian king surrendered and the new German enemy invaded Turin, Pavese found himself with an uncomfortable choice – either to join the fascists of the nearby Republic of Salò under the rehabilitated Mussolini, or to hide in the hills outside the city with the communist partisans. In the event, Pavese did neither. He found refuge in a monastery and hid until the end of the war.

He was as aware of his prevarication as any Hamlet and regretted it for the few remaining years of his life. As unsettled in his affairs of the heart, Pavese committed suicide in 1950 at age forty-one, in the ashes of several failed romances, most famously with the American actress Constance Dowling, who inspired his best-loved poem ‘Verrà la morte ed avrà i tuoi occhi’, which translates approximately as ‘Death shall come and she shall have your eyes’.

Confused by life, Pavese looked to literature for guidance. He was drawn not only to the myths and superstitions of the peasants of the hills of his youth, but also to the America of his literary imagination, a land of reinvention that he never had a chance to visit, and to the struggles of great loners like Ahab and Stephen Dedalus.

The heroes of his novel The House on the Hill and his masterpiece The Moon and the Bonfires, newly published by Penguin Classics in fresh translations by Tim Parks, are two such confused young men. The Corrado of The House on the Hill teaches in a school in the city of Turin by day (thanks to his Fascist Party card). At night, Corrado bunks in a house on a hill in ‘the country of childhood … of bonfires and larks and fooling around’. There, he finds himself drawn to the dark warmth of a local farmhouse, where he discovers Cate, his girlfriend from a decade before, and her young son. Looking for proof that young Dino is also his son, Corrado dithers between town and hill, and loses his chance to join Cate and her partisan friends, ‘like a boy playing hide-and-seek who creeps into the bushes and likes it in there, watches the sky from under the leaves and forgets ever to come out’.

If the hero of The Moon and the Bonfires, nicknamed ‘Eel’ in Parks’ translation, is more Dante than Hamlet, he is no less a man in crisis. An orphan, Eel returns after the war, nel mezzo del cammin of his vita, to the peasant countryside of his barefoot youth after a couple of decades of successful escape to America, seeking a piece of land on which to build the paradise he couldn’t afford as a boy. His Virgil is his childhood hero Nuto, a carpenter and clarinet player, a man who had initiated him in legends and superstitions, in the prophecy of the moon and in the restorative power of fire. As he travels through the memories of his youthful privation and of his longing for the daughters and the comforts of his old padrone, he sees at first-hand how the war has done little for the continuing misery of the peasants. Gradually Nuto begins to fill in the gaps Eel has missed while making his fortune in America, and spreads before him the full horror of that autumn of 1943 and the war, whose bonfires restored nothing.

The English-born writer and translator of both these books, Tim Parks, translated himself to Italy in 1981, where he has written in fiction and essay about Italian politics, football and the attempts of others to make accessible both the country and its literature. For Parks, the landscape of Pavese’s novels with its ‘big blackened stones, the gnarled fig tree … nothing but maize stubble’ recalls not the Piedmont of modern-day wine tours and truffle hunts, but the bleakest reaches of Thomas Hardy’s Wessex. Yet travelling back with Pavese to a not-so-distant civil war is a reminder that the decline and fall of any country divided as brutally as Italy was in that autumn of 1943 may come at any moment, and, like Death in Pavese’s poem, it will come with your eyes.

THE HOUSE ON THE HILL and THE MOON AND THE BONFIRES

translated and with introductions by Tim Parks

Jonathan Levi is an American writer and academic living in Rome. He co-founded Granta and writes short stories, essays, plays, opera libretti and novels, including A Guide for the Perplexed and Septimania.