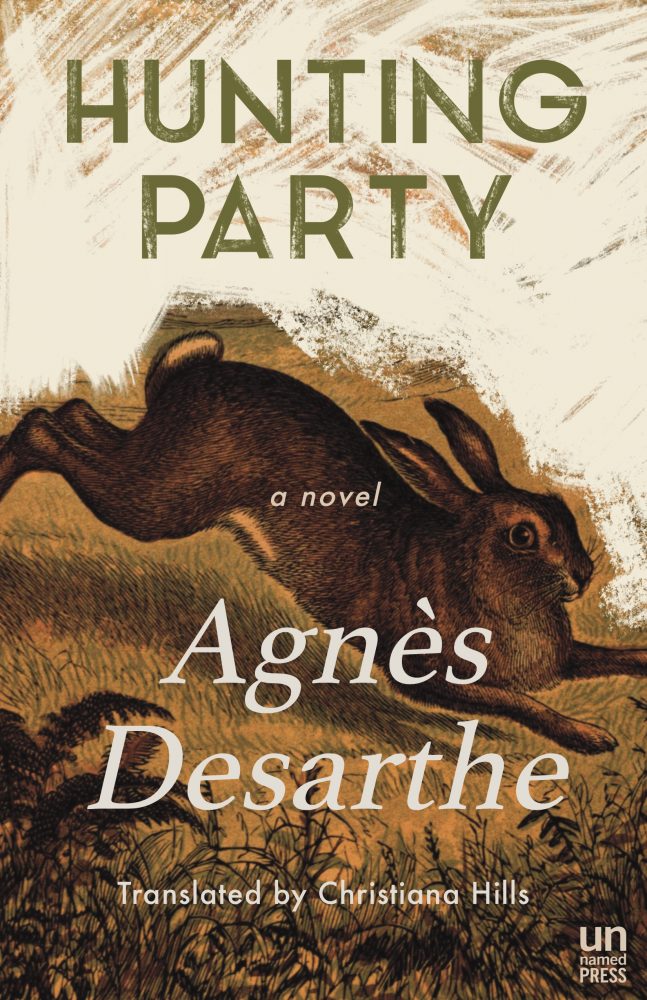 Hunting Party begins with a somewhat startling premise: the reader is addressed by a rabbit. This is an animal with a confident and compelling voice, and the most original thinking in the novel comes from him. The translator, Christiana Hills, talks in her Afterword about being pulled into the text by this ‘enigmatic and captivating’ identity, and this pull is one of the most appealing aspects of the novel – the voice is so engaging you want to read on just to see what it will say next.

The role of the rabbit in the novel’s plot reflects the wider questions concerning nature and ‘natural laws’ with which the novel engages. Tristan, a young man without employment or aims, has recently moved to a village in the French countryside. In order to ingratiate themselves with the locals, his wife, Emma, persuades him to join a hunting party. Tristan dislikes the idea of hunting and killing, but, during his first foray, ends up accidentally wounding a small rabbit. He secretly places the rabbit in his bag and continues the hunt. The animal begins to talk to him and they develop a strange intimacy.

The exchanges between Tristan and the rabbit provide space for philosophical reflection: what is ‘natural’, and how do we reconcile our individuality with what we are told should be ‘natural’ for our ‘kind’? One interesting and noticeable difference between Tristan and the rabbit is that the rabbit is not at all anxious about being good enough. Tristan, however, is consumed by anxiety over whether he is doing what he’s supposed to – as a man, and, specifically, as a man in society. This is an overarching theme within the novel: we witness most of the human characters striving to perform gender correctly and being miserable as a result. In fact, the difficulties of embodying and performing gender, particularly masculinity, are painfully active in Hunting Party. Toxic masculinity is shown to poison men’s relations with women and children, and to make friendship impossible between men since they can only be competitors in the same performance category. And there is further conflict between those who believe gender norms to be ‘natural’ and those who find this very ideology leads them to become ‘unnatural’.

Such ‘natural’ norms are overturned by the plot of the novel: in addition to a philosophical rabbit talking directly into Tristan’s brain, there are upheavals of nature in the form of earthquakes and floods, which create both physical and moral disruptions.

Tristan’s voice, consisting mostly of unfocused meanderings around the things he doesn’t want to think about, doesn’t know about, or chooses not to pursue, nevertheless offers a prism through which to investigate the impossibility of living according to the norms that govern our lives – and suggests that perhaps the only way out is with the help of a thoughtful rabbit.

Translated from the French by Christiana Hills