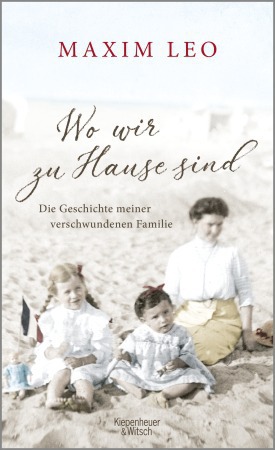 Readers may be familiar with Maxim Leo from his book Red Love: The Story of an East German Family (Pushkin, 2013), translated by Shaun Whiteside, in which Leo traces his family story through the Cold War. In Wo wir zu Hause sind (‘Where We Are at Home’) he goes back even further, to the 1930s, when his grandparents’ generation was threatened by the rise of the Nazis. Although Leo himself had not previously identified much with his Jewish heritage, researching this story led him to consider his own roots and the ultimate question that many of us face in life – what we consider to be home, and where we feel we belong.

Wo wir zu Hause sind focuses on Maxim Leo’s Great-Aunt Ilse, and her cousins Hilde and Irmgard. As the Nazis tighten their grip, the relatives are forced to flee Germany. Ilse moves to France and ends up in an internment camp, where she meets Heinz. When Ilse falls pregnant with their daughter, Susi, they escape the camp and join the resistance. Hilde moves to England with her son André, while Irmgard and her husband Hans move to Israel and join a kibbutz. Maxim Leo traces their roots back to England, Israel and France, meeting each new branch of the Leo family. He forms close connections with some of his relatives, in particular Amnon, a cousin who later moves from Israel to Germany to study and work.

This book had a profound effect on me. The terrifying rise of anti-Semitism today throws the accounts of Nazi brutality into sharp relief, and the emotional pull of the Leo family story is strong. Although many of Maxim’s relatives survived the persecution, they only did so by abandoning their homes and starting over in completely different countries, learning new languages and often putting themselves in danger to keep themselves and others safe. Even today the family is still scattered; many of the relatives are not in touch with each other and do not speak the same language. The displacement of Maxim Leo’s family has had a lasting impact right through to the present day. And yet, when they finally meet, the relatives feel drawn to one another. They share stories and memories, exchange experiences, and discover new homes they never knew they had. Maxim Leo is intrigued by Israel, his Israeli cousins want to move to Germany, while his cousin Susi, who grew up in Vienna, feels compelled to move back to France, where she was born. And Leo’s British cousin Andrew wants to embrace his German heritage and get a German passport to ensure he can move freely across Europe after Brexit.

Although this is first and foremost a family history, it is so firmly rooted in the present that readers can’t help but identify with it. The family photos are a beautiful addition, and the engaging and accessible narrative style reads almost like a novel. I think this is a very important book and one that should be widely available in translation.

Alyson Coombes is a freelance translator, editor and book blogger (fromcovertocover.co.uk). Her co-translation Eichmann’s Executioner by Astrid Dehe and Achim Engstler was published in 2017 by The New Press. She works with New Books in German, 12 Swiss Books and other initiatives to help find and promote the best contemporary German-language fiction in the UK.