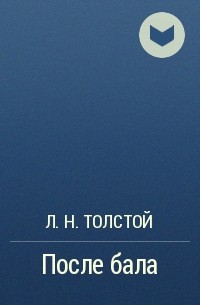 After the Ball is a novella written by Tolstoy in one day in 1903, and turned out to be a prophetic insight into the horrors of the twentieth century.

The story’s plotline is centred on the narrator’s two encounters with the father of the girl with whom he is passionately in love. He recounts the night of the ball at her house and his tender feelings when he, intoxicated with adoration, watches how his beloved dances the mazurka with her father, a well-groomed and debonair old colonel. The morning after the ball, unable to sleep, the narrator accidentally witnesses a horrifying scene: the running of the gauntlet by a Tartar who has deserted the army. This procedure of incredible brutality is conducted by the same charming colonel, the father of the narrator’s fiancé. Unable to reconcile two contradictory images of the same man, the narrator loses his faith in love as well as in life – in mankind as a whole.

As A.N. Wilson remarks in his biography of Leo Tolstoy, this story reveals “the singular truth about the country which it embodies … the secret of how one nation could produce in the same generation Nijinsky, Shostakovich, Akhmatova … and the Stalinist purges”. I would add that Tolstoy’s story informs our understanding not only of the emergence of Russia’s Gulag, but Nazi Germany’s “banality of evil”, Maoism and even the Khmer Rouge.

Moscow-born British author Zinovy Zinik lost his Soviet citizenship in 1975 and arrived in London via Jerusalem in 1976. Zinik has written 14 books of fiction and non-fiction in both English and Russian, dwelling on the dual existence of immigrants, religious converts and political outcasts. His recent books in English include an autobiographical tale History Thieves and a novel Sounds Familiar or The Beast of Artek. His latest novel in Russian is The Orgone Box, published this year. Zinovy is a regular contributor to the Times Literary Supplement and BBC Radio.