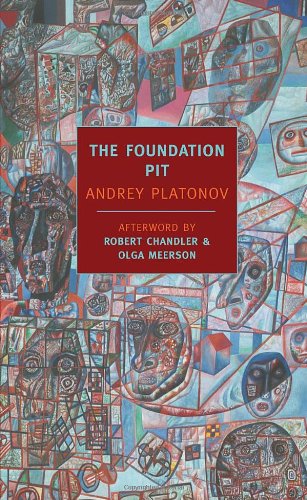 If a day spent reading a book you love can be compared to a great festival, a joyous holiday, that holiday for me was the days and nights I spent reading Andrey Plantonov’s Foundation Pit (“Kotlovan” in Russian). You have to listen with your internal ears to every word of Platonov’s prose – in the same way you might savour a good Cognac. English-speaking readers are fortunate because this novel has been translated by a wonderful devotee of Platonov, Robert Chandler. In fact he has twice translated the novel. But that is another story.

In his unique fairy-tale style, at once beautiful and brutal, Platonov, with intense love and fear describes the birth of Soviet society. This is one of those books that, once read, lives with the reader forever. It has lived with me for more than forty years. I would very much like the number of fans of this novel to increase.

Andrey Kurkov was born in St Petersburg in 1961. Having graduated from the Kiev Foreign Languages Institute, he worked for some time as a journalist, did his military service as a prison warden in Odessa, then became a film cameraman, writer of screenplays and author of critically acclaimed and popular novels, including the cult bestseller Death and the Penguin.