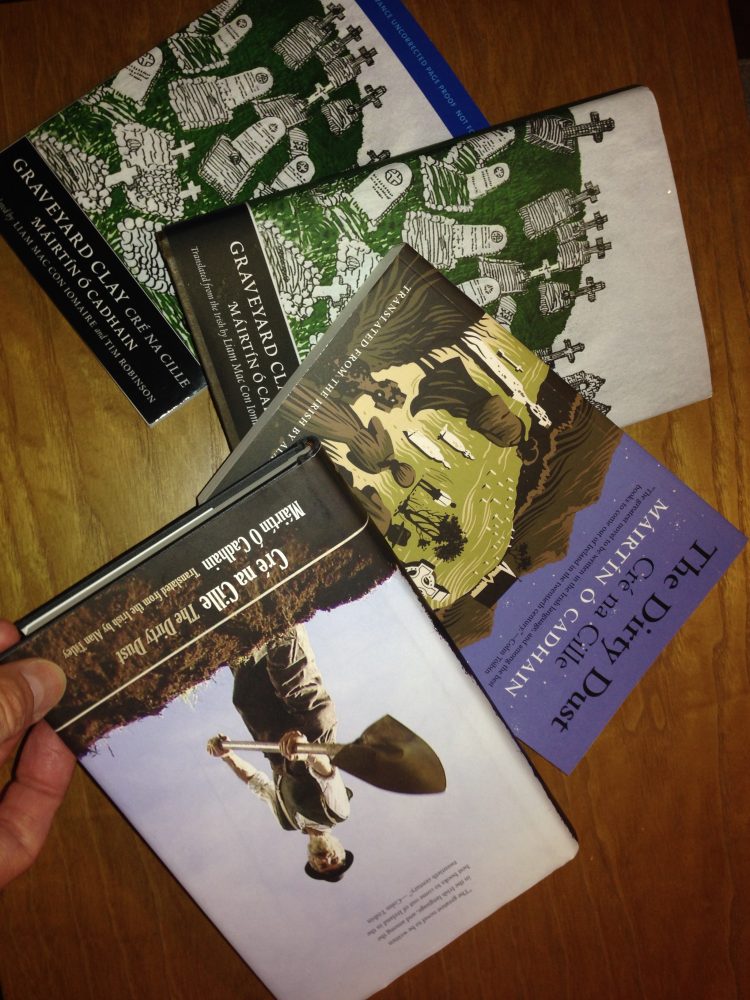 This spring the Margellos World Republic of Letters, an imprint of Yale University Press, took what has been seen as an unusual step. Following its 2015 publication of The Dirty Dust, Alan Titley’s romp of a translation of Máirtin Ó Cadhain’s seminal 1945 Irish-language work, Cré na Cille, Margellos has published a second translation of the novel, Liam Mac Con Iomaire and Tim Robinson’s Graveyard Clay.

Intrigued by this ‘stereophonic’ project, I caught up with John Donatich, Director at YUP, to see if I could understand more about the thinking behind this dual publication.

The Margellos World Republic of Letters series was set up to identify and publish works of cultural and artistic significance previously unavailable in English, and to publish literature and philosophy requiring new translations, with the stated aim to “stimulate creative exchange”. Publishing two different translations of the same book within a year of each other certainly adheres to this mission.

“I hope that the two volumes will stimulate debate on the virtues and problems of translation,” says Donatich. “The translators have mentioned that the English language is impoverished in comparison to Irish when it comes to invective and insult. How many ways do we have to say ‘duck-milker’ or ‘Toejam’ or ‘sitter in a sailor’s lap’?”

The results, Donatich says, are “thrilling”, the translators “riffing” on the book like they are performing “creative jazz”.

The musical metaphor goes deep in the project, it seems. Written between 1945 and 1947, Cré na Cille, considered as possibly the most important work in modern Irish, is like an incredibly complex musical composition. Written entirely in dialogue, the book describes the concerns, squabbles, preoccupations and indignations of the dead lying in a graveyard in the region of Cois Fharraige in south Conamara during World War II. How to do this intricate and experimental work justice? Margellos had to find a way.

“The book was so difficult to translate in the first place. The stakes were made higher as this would most likely be the first exposure many global readers might have to this purported classic. We had to make sure to get it right. That said, we felt the book could stand two different kinds of interpretations, much like a great musical piece might stand several interpretations: a rigorous, elegant and faithful version and one that took more expressive risks.”

Yale’s marketing matches Donatich’s description: Mac Con Iomaire and Robinson’s Graveyard Clay achieves “a lofty goal: to convey Ó Cadhain’s meaning accurately and to meet his towering literary standards”. Titley’s The Dirty Dust, on the other hand, is “vigorous”, “full of the brio and guts of Ó Cadhain’s original”.

“When we decided to do the different versions we had to make distinctions between them,” Donatich explains. “There was no point in commissioning two translations whose only difference would be modulations in tone and word choice. There had to be an interpretive aesthetic unique to either version from the start. So, it was more of a philosophical stance toward the work, an imagining of different readers and users of the texts, a positioning of voice and persona, an evocation of a specific world through musical registers.”

For non-Irish speakers, however, it is difficult to know which is the more faithful translation. A comparative reading could suggest that Titley is more faithful to the spirit of the original while Mac Con Iomaire and Robinson are more faithful to the letter. And to some extent, Donatich agrees: “I think that is probably right, though ‘spirit’ is a tough thing to update to the contemporary moment. There’s a medieval, theological sense of the word ‘translation’ that means something like the ability to convey unto heaven without dying. I think both versions manage that.”

The translators were, of course, aware of each other’s work. In the introduction to their translation, Mac Con Iomaire and Robinson describe Titley’s “creative interpretation” of the original’s “rich and savage demotic base”. And Titley’s does indeed feel like an earthier celebration of the original. Perhaps it was this savagery that prevented for so many years the full publication of an English-language Cré na Cille.

“O’Cadhain himself had an ambivalent ambition for the novel’s translation. Some say he never wanted to give the English the satisfaction of reading it. Others say he was very hungry to be recognized. Alan’s version is quite savage and funny; Tim and Liam’s feels more vulnerable and tender – there is compassion for the hardship of the Irish matriarchy there. Alan’s feels claustrophobic too; one senses the weight of the earth on the throat.”

With two full translations now available, Cré na Cille should finally be able to take its rightful place: as an Irish book; as a modernist work; and as a work within the European pantheon.

“I hope it succeeds in all three. It’s an historical document of a particular moment in Irish history. It’s a modernist work in that it provides the subjective sense of being alive (or dead, actually!) in that particular historical moment, presented in an experimental format. And, as readers and writers study the book, it will begin to be understood within the European literary tradition.”

And publishing two translations should teach the English-speaking world something about literary translation, shouldn’t it?

“We’ve only just begun. I think the two versions of the book should be studied as a kind of case study in the choices translators have to make. It’s an unusual situation, a gift in that sense.”

Ó Cadhain was a great champion of the Irish language, and particularly of Irish speech. Now, English speakers have two ways to appreciate his great gift to literature.

This blog was originally published on ELit Literature House Europe website on 27 June 2016.