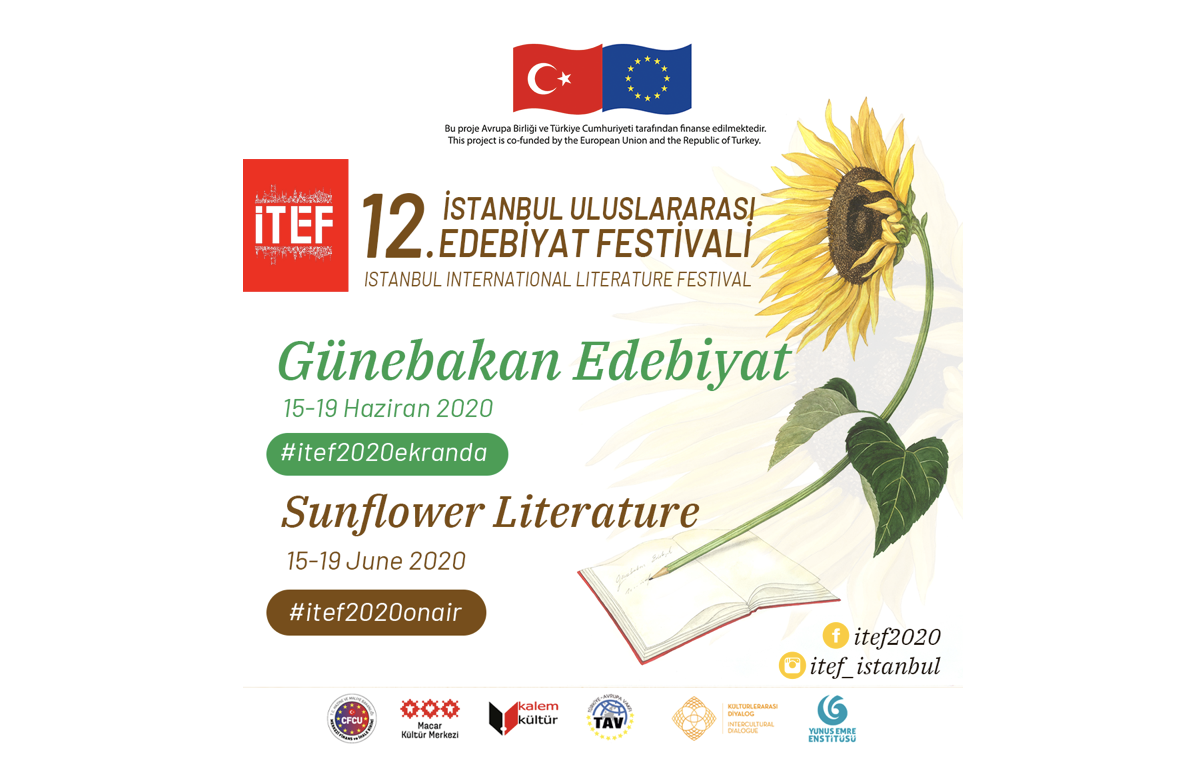 ITEF-Istanbul International Literature Festival has been bringing writers, publishing professionals and readers together since 2009. From June 15 to 19, 2020 ITEF celebrates its 12th anniversary by inviting you to meet wonderful writers virtually on screen in the comfort of your homes. The theme of the festival and digital discussions is “Sunflower Literature”.
Through the power of technology to bring people together from all over the world, ITEF wants to bring hope to our lives in isolation, and joy and excitement to our ‘new normal’ by turning our faces to towards the light of literature and sunflowers. Our festival logo has been created by the famous author and illustrator Feridun Oral.

In the autumn we hope that we’ll be able to hold our traditional ITEF 2020 in our usual venues and meet you all face-to-face but for now, in these difficult times, we’d like to welcome everyone to join us in joy for our first ever digital festival #ITEF2020onair.

#İTEF2020onair – Istanbul International Literature Festival is taking place with the support of the EU-Turkey Intercultural Dialogue Programme, as a part of the project Diversity in Unity: Intercultural Dialogue Through the Waves of Danube and Civil Society Dialogue Programme, under the leadership of the İstanbul Hungarian Cultural Centre and in partnership with the Turkish European Foundation and the Kalem Culture Association.

The EU-Turkey Intercultural Dialogue Programme supports projects encouraging a wide variety of cultural events, with the goal of improving intercultural dialogue and in order to facilitate social development between Turkey and EU countries and to establish a lasting dialogue between institutions.

More information about the festival here.

Biographies of #İTEF2020onair Authors and Moderators

Amin Maalouf was widely recognized with his first book published in 1983, Les croisades vues par les Arabes (The Crusades Through Arab Eyes, YKY). His second book, Léon L’Africain (Leo The African, 1986, YKY ) is considered a classic today. His other works include Samarcande (Samarkand, 1988, YKY), Les Échelles du Levant (Ports of Call, 1996, YKY) , Les identités meurtrières (Need to Belong, 1998, YKY) and the winner of the 1993 Prix Goncourt Le Rocher de Tanios (The Rock of Tanios, YKY). He has also written a libretto, Love From Afar (2002, YKY), for the opera composed by the Finnish musician Kaija Saariaho. His second libretto Adriana Mater was published in 2006 (YKY) and his second essay collection, Le Dérèglement du monde (Disordered World, 2009, YKY). Maalouf was elected as a member of Académie Française in 2011.

Maya Jaggi is an award-winning cultural journalist, critic, and artistic director in London, whose writing on global literature and art appears in the Guardian Review, Financial Times, New York Review of Books, and other publications. She is Critic at Large for Words Without Borders in New York. A former staff journalist on the Guardian, where she was a profile writer and fiction critic from 1999–2015, she has reported from five continents, interviewed Nobel Prize-winning and other authors including Orhan Pamuk, Toni Morrison, Umberto Eco, and Edward Said, and judged literary awards including the Man Asian prize (as chair) and the Dublin IMPAC. Educated at Oxford University and the London School of Economics, she was described as ‘one of Britain’s most respected arts journalists,’ by the Open University, which awarded her an honorary doctorate for ‘extending the map of international writing.’

Alejandro Zambra won several awards with his first novel Bonzai (2006, Notos Kitap) and was adapted into a movie in 2011 by Cristián Jiménez shown at Cannes Film Festival and Istanbul Film Festival. He wrote for the newspapers such as El Mercurio, La Tercera, The Clinic and El País and was shown as one of the most important authors in Spanish by Granta. The books published by Notos Kitap are Ways of Going Home (2015), My Documents (2016), Multiple Choice (2018) and Tema Libre, the combination of short stories and essays published in January 2020.

Nilay Örnek started to work for the newspaper, Sabah during college and worked as an editor for 5 years. In 2000, she started to work both as an editor and writer for Milliyet, and Habertürk and Akşam. She published two books called All Good People Are a Bit Forlorn (2017) and Hope Searches For A Partner (2019) by Artemis Publications.

Jeffrey Moore is a Canadian writer and translator. Moore’s novels, The Memory Artists (2006) and The Extinction Club (2010) were published by April in Turkey. Moore also gives lectures and workshops over translation studies, literature, and creative writing at Concordia University, McGill University and the University of Montreal.

Darren Simpson had short stories appear in numerous publications before his first novel was published. His debut young adult novel named Scavengers was published by Genç Timaş. Scavengers was a Guardian Best Book of 2019 and was selected for 2019’s national Summer Reading Challenge.

Eva Meijer is an artist, writer, philosopher and singer-songwriter. Her books have gained worldwide success and were translated into 17 languages. She has nine published titles and two of them were translated into Turkish. Her novel Het vogelhuis (Bird Cottage) was published by Nebula Kitap and Dierentalen (Animal Languages) was published by Kaplumbaa Yayınevi. Het vogelhuis (Bird Cottage) won the readers’ prize of the BNG Bank Literatuurprijs.

Başak Güntekin studied Comparative Literature (M.A) at Bilgi University and now works as an editor and translator. She is one of the authors of Kadınlar Dile Gelince (When Women Speak Out) a book published by Amargi Feminist Kitabevi in 2009. Başak Güntekin works at Nebula Kitap and continues to write essays, critiques and articles on literature and art for various newspapers and magazines.

David Nicholls was trained at the American Musical and Dramatic Academy and worked as an actor for several years. He came to a turning point in his career when he was assigned the role of a writer in a theatre play and after that he wrote his first novel. His bestselling novel named One Day has been translated into many different languages and adapted into a screenplay. His novels named Starter for Ten (2014), One Day (2015) and Us (2017) was published by Pegasus Yayınları. His new novel Sweet Sorrow is published by Epsilon Yayınevi in 2020. Nicholls continues writing novels and works as a screenwriter.

Rosie Goldsmith is an award-winning journalist. For 20 years she presented various BBC programmes. She is the founder and director of the European Literature Network, which she created for everyone who cares about promoting excellent writing from Europe in English. She is the chair of judges for the EBRD Literature Prize, runs events and festivals in Britain and overseas, and works closely with many leading cultural organizations.