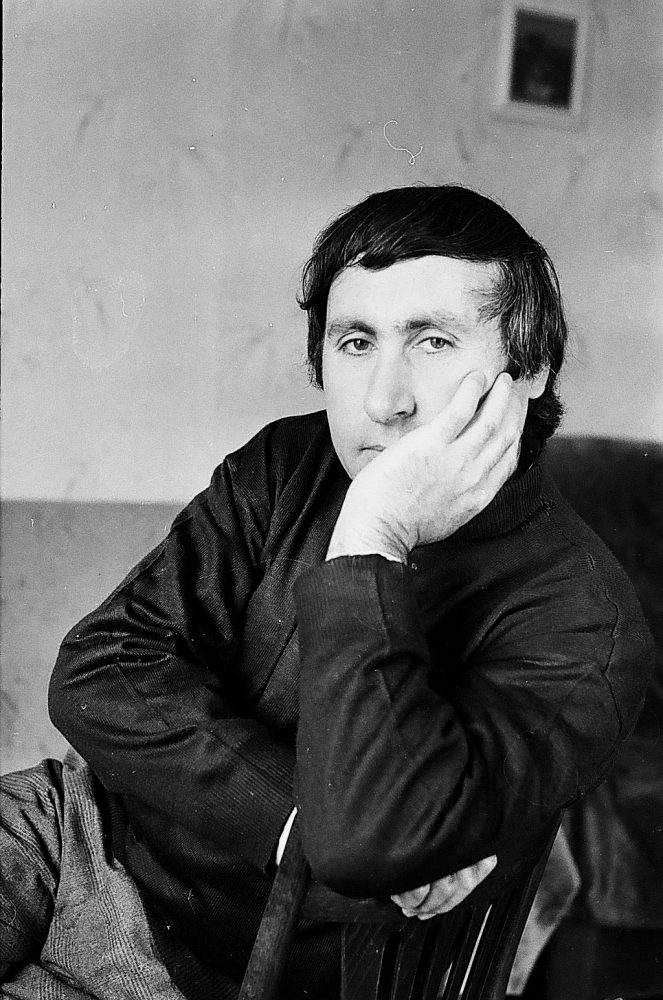 Translator Ollie Matthews, a member of the Oxford Georgian Translation Project, offers an insight into a new translation of Goderdzi Chokheli’s novel Human Sadness and short stories “Full-stop and Comma” and “The Communal Crow”.

Translating Chokheli’s work was challenging: not only do his characters speak in dialect but it was also difficult to find a suitable English idiom in which to express the author’s words. On numerous occasions it was necessary to consult Chokheli’s wife, Nino, who provided ample assistance on questions of meaning and Chokheli’s motives behind his work. Additionally, she has provided photos and other materials to the project.

I particularly enjoyed the quality of Chokheli’s writing. His spare prose style is accomplished and is reminiscent in places of Gustave Flaubert and even Hemingway. A striking feature is the economy of his language. Moreover, the inflected nature of the Georgian language allows his sentences to be extremely concise; often it was impossible to achieve the same effect in English. The concision with which many of the violent episodes of the novel are recounted can be shocking for the reader, for instance in this account of a boy’s death:

“The fire caught the boy’s clothes. The stupid woman had gone and left a bucket of kerosene lying around. We thought it was water, so… we burnt the boy.”

The gruesomeness of the scene, and the villagers’ horror at their accidentally killing the boy, are implied rather than explicitly shown. The matter-of-fact way in which the matter is conveyed adds to the mundanity of the violent and brutal in the villagers’ world.

By translating Chokheli’s work, I feel as if I have lived in his world. Indeed I was tempted to believe that the book was non-fiction: an impression helped by the documentary trope of the novel that allows Chokheli to balance the real and the mystical.

Human Sadness leads us on a journey through the full range of human emotion, from the most absurd comedy to the very depths of tragedy. Chokheli’s style is a realism that brings his environment to life but is not removed from the mystical and the magical. He is telling us that the border between the real and the fantastic is an open one. He is also a chronicler of his way of life, and of life in general. Human Sadness might as well be subtitled a compendium of the human condition.

“Untie me, or I’ll knock your block off!”

“It’s got nothing to do with me…” said Gamikhardai.

“So what are you here for then?”

“I’m collecting worries, the villagers’ worries, about all their trials and tribulations,” Gamikhardai said, and then he turned away.

“Damn you!” Galilei muttered under his breath.

“So then, folks, have you got any new worries for me?” and Gamikhardai went up to a group of women and jotted down the number of the next worry in his notebook.

One of the voices I translated in Human Sadness is that of Gamikhardai, the worry-collector. The worry-collecting is a set-piece of the novel’s structure: the documentation of a fantastical military campaign by the inhabitants of the village of Chokhi against neighbouring villages. Upon the conquest of each new village, the worry-collector sets to work asking the subjugated villagers what worries them the most. Thus the question, “What’s worrying you?”, becomes a familiar refrain, and acts as a plot device to open up further stories about the harsh mountain life that Chokheli knew so well.

One of the most heartrending passages of the novel unfolds when the worry-collector’s questions are turned back on him. We discover that the man who is so interested to know everyone else’s worries has a fair share of his own too:

“Are you really not in love?” asked Gamikhardai.

“Why not? Love is the greatest worry.”

“When she was walking along the road one day, some bandits were lying in wait and they attacked her. She didn’t say anything for quite a while. One day she was sitting and she looked up at me without making a sound. I asked her what was wrong. She didn’t say anything. Then she came up to me and kissed me on the knees. I reached down and hugged her, but she pulled herself from my arms and went away. She went away and… that’s all really… she went away. She threw herself into the churning waters of the Aragvi. And so then I turned to collecting people’s worries. Any worry at all in the world, I have to collect it; and then go to God.”

Tears started welling in Gamikhardai’s eyes and so that Chaghi would not notice he turned around, went over to Salome, and wrote down the number of the worry in his notebook.

No one is exempt from worries and trauma in Chokheli’s novel, a reflection, then, of real life. After all, everyone is a story, as Chokheli states in the opening of the novel.

In this story of the lives of two little girls, Chokheli mixes the comic and the profound to paint a quaint picture of mountain village life. Chokheli’s method is impressionistic as he provides a sweep of the heroines’ lives, who are nicknamed Full-stop and Comma, from the daintiness of their childhood into the implied family bliss of their adulthood.  The charm of this story provides a pervading sense of sweetness which opposes itself to the dark tragedy of other stories.

The story emerges from the author’s reflection on names. He writes that people are their names: we do not know what Full-stop and Comma look like, nor why they are called so. Their children are described as “little full-stops and commas”. The story ends with a reminder of the precariousness of life: “No one knows what will come next, or what will change this picture”, before a prayer: “Lord above, give mercy to all our names upon this earth, do not put the full-stop and comma out of place, and don’t lead us into temptation, in the glory of Thy name.”

As the title suggests, this is an absurd short story about the shortcomings of the Soviet system applied to the rural way of life. In one of his most comic pieces, Chokheli’s characters compete over ownership of a crow under the arbitration of the local Communist Party official. What unfolds is a comedy of manners as a rather simple though absurd problem stumps the Soviet judicial system, and as the villagers band together to find a solution they find themselves at risk of collective punishment.

Chokheli proves his genius for the short form through his economy of language. In this story he achieves in less than two thousand words to finely sketch the customs of his time as well as to offer an amusing satire of Soviet power in Georgia. As such, it serves as a parable of Georgia’s absurd and oftentimes tragic career through the twentieth century.

“He says tomorrow morning we’re to go down to the village to run a little test. On a high rooftop I will put down some bird seed on one side and Makhara will do the same on the other side. We’ll stand next to the feed we’ve put down and the judge will stand in the middle, then we’ll wait for the crow. If he flies to my side then Makhara will pay a fine of a hundred roubles, if he flies to Makhara’s side then I will pay.”