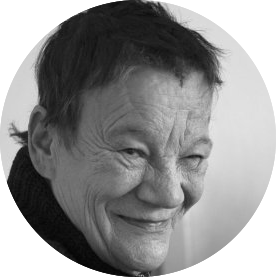 Nightmare of the Embryos

But that was always it. The search for a lost land. Love. Our fucked-up youth, always exploited, betrayed, bribed, lost. Lies, sadism, the malicious laughter of the ones who were stronger than us. Love, a useless pastime, bad enough having to feed the kids in the home. We were tough by day, our last shreds of humanity torn apart by our boundless anger.

Night then, in sheets that weren’t ours, curled up like embryos, was another world. Dormitories, embryos in beds, craving a womb. A blue nightlight (the eye of justice, judging), every breath a meagre measure of affection for the stranger’s embryo beside you. Night: it was hands groping in the dark, moth-like thoughts, dreams cast out into an inhuman emptiness, screaming children’s prayers, ice-cream, icebergs, unconsciousness. Night: it was the children’s great no-man’s-land. We too were lovable. But we didn’t want to live. Night, and it was the matron’s metallic voice. Trembling, we waited for her call, and all the embryos crept back to their own strange beds. Each child was an only child – we weren’t a family!

The nights in these rooms, those cursed nights of unwanted children.

Lucerne 1950. A children’s home at the edge of the woods. Its own large garden, chickens in the backyard, nuns from the Seraphic Love charity. The front steps, a children’s Matterhorn, enormous in my memory, unclimbable. Don’t go down into the street with the people, where children played with balls, where there were parents and strong boys. Don’t go down, danger lurked on the bottom landing. And there it was, a woman who wanted a pretty child, shouting and waving at me in my invisible cage, waving with red fingers, my mother, who wanted a pretty child and stank of alcohol. Her laugh seemed to have slipped to the corners of her mouth and clung on there, just a cold grin. She wanted a doll child, a child to play with. I was ugly and squinted. A nun’s hand gripped my arm, lifted it up. So I waved too, with broken-winged fingers, waved to my mother, who always celebrated Christmas without me, who stood there on the bottom landing, lacking all tenderness.

December 1951. St Nicholas, you good man, they sang, because he loved the well-behaved children. They hung on his red, padded coat and touched his beard. They all laughed. I was a bed-wetter, I was ugly and squinted. I broke the other children’s toys, dive-bombed their sandcastles and tormented chickens in the yard. I stole. And so I spent Christmas Eve in a well-sewn jute sack ‘out in the cold’. The saint’s love was reserved for the others, the ‘dry’ children, the ‘honest’ ones. I could hear the muffled shouts of two hundred joyful children in the decorated hall. I dreamed of mandarins and was filled with hate. Adult footsteps. They stopped by the sack, this lumpy brown sack with the child tied up inside, hesitated, then resolutely moved away. In the hall, at the party, they were eating vanilla pudding and syrup. I was a bed-wetter and I squinted, and they called my mother a drunken slut. She never came again. They called it alcoholic psychosis now and put her away in a sanatorium. It sounded less disreputable, alcoholic psychosis. I had a sick mother now.

Mariella Mehr was born into the nomadic Yenish people and was the victim of a notorious programme run by the Swiss charity Pro Juventute, which systematically removed Yenish children from their parents. Mehr’s major literary work is the Trilogy of Violence. She has received numerous prizes for her works. Words of Resistance is a collection of texts that range from poetry to essays and short stories.

Ruth Martin translates fiction and non-fiction from German, and teaches translation at the University of Kent. Her recent translations include Bettina Stangneth’s Eichmann Before Jerusalem; Hubert Wolf’s The Nuns of Sant’Ambrogio; and selected essays by Hannah Arendt. She helps to run the Emerging Translators Network.