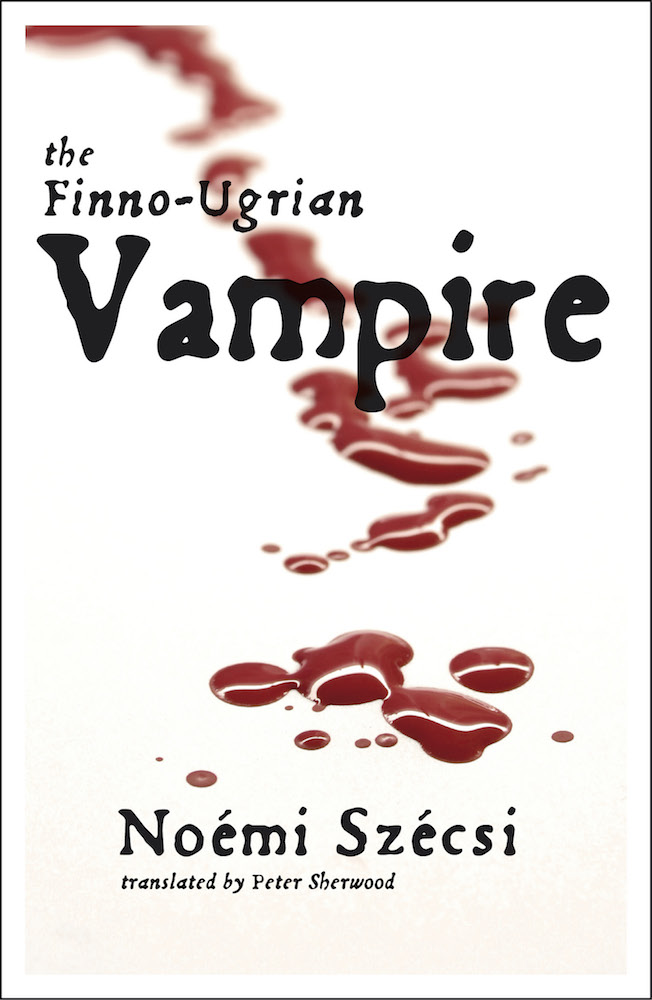 I could call my grandmother cosmopolitan, since she has visited virtually every corner of the globe and everywhere felt immediately at home. But not every citizen of the world is likely to use a china tooth mug decorated with a map of Greater Hungary and the irredentist slogan ‘Transylvania is Ours!’ Because that’s what my Grandmother is like. She comes home at dawn having gorged herself, and uses this mug to rinse out her mouth. Sometimes she wakes me up with the noise of her gargling.

And that’s just how it was that morning. I stumbled out to the bathroom as I was, in my nightgown. It was a quarter past five. Grandma was just stripping away the layers of make-up she had plastered over her intense beauty. Because she is gorgeous, like a newly-restored porcelain doll. As the slinky little silk evening dress slid from her slim body, Grandma glittered in all her unvarnished glory and I just stood there awkwardly in the cotton nightdress that I wore now that the autumn nights were drawing in but before the district’s central heating had been switched on.

‘Yes, I’m absolutely livid. This fellow tonight was an absolute disaster. I tried every trick in the book, body language and all, before he realised where I was headed. To cap it all, he lived out in the back of beyond and once I was done I had to wait an hour for a taxi. Meanwhile I watched him bleed dry. Once he’d snuffed it, I left.’

‘Please, spare me the details.’

Sometimes when I think of blood, I feel quite ill. Nauseated. In my mind’s eye I can see the gaping wounds, and it’s as if it was me the blood was draining out of. It makes me grow faint.

‘No good turning your nose up. You’ll get to like the taste sooner or later.’

It may sound odd for someone like me to address this femme fatale impertinently as Grandmother. However, for one thing it is a fact that we were family and for another Grandma already had more than thirty-three names, none of which she was particularly attached to, while her grandmotherhood was permanent, like the stars in the sky. And for another thing, I always got confused about whether at any particular time she was being Lilith, Lamia or Empusa.

‘Look at me. Don’t I look terrific?’ Grandma forced me to look her in the face. Her lips were still damp and swollen. ‘That’s from the regular consumption of fresh blood. It’s packed with iron and minerals. And now just take a look at yourself,’ she went on. ‘Your hair is falling out and tired, you’re thin as a rake, and that makes your nose stick out of your face even more.’

I turned my head away, repelled by the sight of the bloody mouth. Grandma caught my glance and looked deep into my eyes.

‘You must suck out their blood before they suck out yours.’

That was scary. I went off to make some hot chocolate, wondering who I was to consider as the general subject of that sentence as I measured out the chocolate and the sugar. That’s the kind of thing I drink, as I am still alive. Grandma has been among the living dead for at least two hundred years, so everything she eats tastes like sawdust to her, except for human blood, of course, which is truly flavoursome.

I sat down on my bed, mug in hand. From the window of my small attic room I could see the bare trees bathed by the light of the rising sun. For this nation the City Park in Pest commemorates the most glorious days of its history. Here, in 1896, the Hungarians celebrated what some scholars said was the thousand-year anniversary of the arrival of their ancestors in their present-day homeland (the exact month and day they’ve still not managed to work out).

And then they fecerunt magnum áldomás, had a huge blowout, as some chronicle or other said. Or was that not in 896? I was always bad at Hungarian history but as a child I was very much taken with the story of the seven Magyar chieftains commingling their blood in a goblet and drinking to seal their alliance. During my years in the wilderness, when I was trying to find myself, it was ample justification to me that my family’s activities in this country were not without precedent. Pretty much nothing can happen without tradition of some kind.

But in this country there is always something to celebrate. The climate is excellent. It’s cold in winter and hot in summer. In the autumn it rains and in the spring the weather is unpredictable. This is something I’ve considered carefully: in my opinion the only thing it lacks is the sea, which would boost the economy through tourism, make for cheaper squid, and enable Hungarian yachtsmen to reach the top rankings in international competitions. On the other hand, it would be annoying if the fig trees were to blossom like mad, twice a year.

Although these Finno-Ugrian people did not fight back with appropriate militancy when they were pincered by aggressive Slavonic and Germanic hordes, Hungary now occupies one of the prime locations in the region. It has wheat with a high gluten content, fructose-rich fruit, wild steeds roam its plains, and fat Hungarian hogs and cattle feed on the mirage-haunted Puszta. Actually, I have yet to see that Fata Morgana but I’m not bothered. Anyhow, the climate is very good for agriculture; this is a rich land.

Grandma had lived in the area around City Park before, at the time of the millennial celebrations, and a number of her unforgettable blood-sucking memories were closely bound up with the Old Buda Castle nightclub. So when she returned to Hungary on the occasion of one of the country’s National Deaths – I can’t now remember which – she was unwilling to lodge anywhere but her old haunts around the park. As for the choice of city, she didn’t hesitate for a moment: in this country there’s no point living anywhere but the capital, Budapest. I really don’t understand what the other eight million Hungarians are doing down there in the countryside. I’ve never been beyond Budapest’s city limits, or at least not further than the airport, but to my mind those country folks must surely all be wallowing around in the mud and dreaming of one day moving up to the Hungarian metropolis.

So, giving the lie to those vaunted vampire legends, we don’t live in some ruined castle. These days even vampires try to find sensible solutions and who wants to spend a fortune on gas, water and electricity? The house where we have a top floor flat has every modern convenience and is in excellent condition, thanks to the house representative’s contacts and string-pulling. The plaster is not peeling off, the walls are not covered in saltpetre and the balconies don’t need shoring up from the outside.

Nevertheless, a large colony of rats can often be encountered in the stairwell. No wonder: Grandma feeds them, as their presence is vital to her image. In practice they would consume anything, but Grandma tends to spoil them with special treats that she reserves for her household pets. We also made an effort to soften the air of sterility exuded by the excessive care that has been lavished on the building. One summer we knocked the plaster off the part of the stairwell leading to our flat and doused the walls with ditchwater until they gave off a suitably penetrating smell of mould. Grandma even insisted on gouging a few bullet holes in the cement. Admittedly, we could have chosen a building already possessed of these attributes, but most of those currently provide homes for the proletariat, and at least we had the added bonus of enjoying our own handiwork.

Noémi Szécsi‘s first novel, The Finno-Ugrian Vampire (2002), was so popular it was reprinted in 2003 and again in 2011. A script based on it was shortlisted by the Sundance Scriptwriters’ Workshop in Prague and the novel was also selected for European Literature Night in 2012. Her second novel, Kommunista Monte Cristo (The Communist Monte Cristo, 2006) won the European Union Prize for Literature in 2009. Utolsó centaur (The Last Centaur), her third novel, was published in 2009. In 2011 she published the novel Nyughatatlanok (The Restless), then in 2012 the children’s book Mandragóra Utca 7 (7 Mandrake Street). Her most recent novel is Gondolatolvasó (The Mindreader, 2013). Noémi was awarded the prestigious state prize, The József Attila díj, for her literary achievements in 2011.

Peter Sherwood‘s first translations, two short stories, appeared as long ago as 1967 and although before The Finno-Ungrian Vampire he had translated only one novel so far, Miklós Vámos’s The Book of Fathers (UK edition 2006, 2007; US edition 2009), and a book of essays by the philosopher Béla Hamvas (Hungary, 2006), many shorter pieces, including a number of poems, have appeared over the years, with some now available online. In a comment published while working on the translation he wrote ‘It is a great challenge, as well as great fun, to be working now on Noémi Szécsi’s satire The Finno-Ugrian Vampire, which brings together her (and my) interests in linguistics, literature, and Hungarian society in a unique and exciting way.’

Noémi Szécsi is one of five European speakers/writers who will talk Europe with Rosie Goldsmith during our Culture Matters – The *Euro Stars* Debate on 27 April at Europe House.

Thank you to the author, translator and publisher Stork Press for allowing us to publish this excerpt.