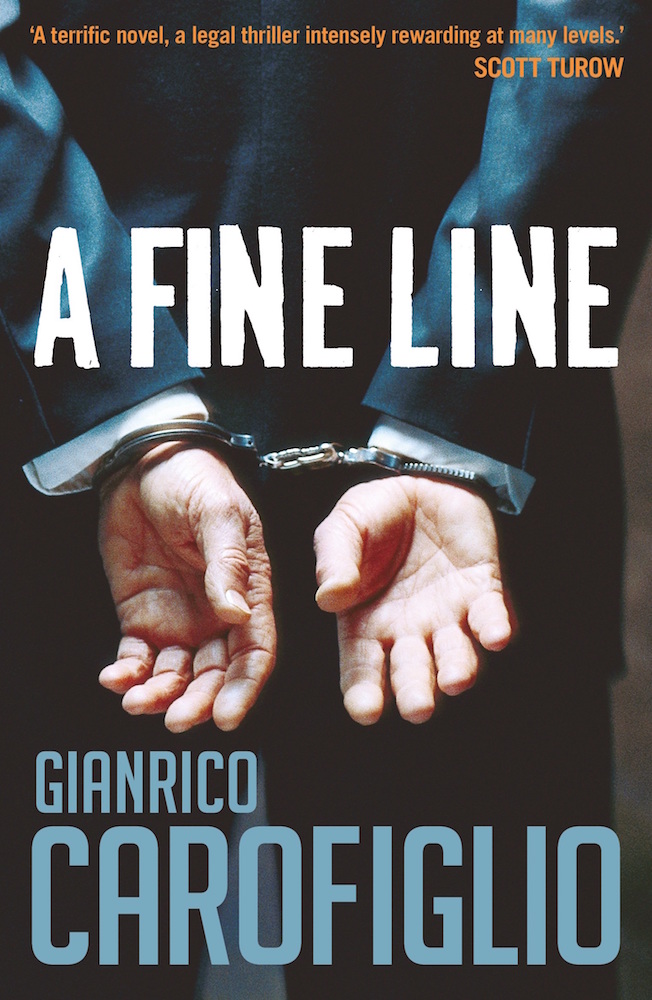 From A FINE LINE by Gianrico Carofiglio translated by Howard Curtis

I didn’t stop anywhere. As I walked steadily towards the centre it struck me that it had been far too long since I’d last had lunch at home. I began an inner conversation, the kind where, if there’s someone close to me, he asks me after a while if I’m crazy. I start moving my lips, clearly (but silently) articulating a dialogue between Guido 1 and Guido 2. I used to do that when I was a child. Then, to avoid being made fun of (which happened quite frequently), I managed to stop. When I grew up, I started again.

Yes, Guerrieri, it’s true, you never have lunch at home.

But why should you? You live alone. Much better to sit down where someone knows you and then you can have a bit of a chat. Having lunch on your own is one of the saddest things there is, and it’s even a bit sordid.

As usual, you’re overstating your case. Sordid, is it? That sense of precariousness you’re talking about is only made worse if you try to escape solitude at all costs.

Did you read that profound thought in a cheap magazine? The kind of magazine for men that always publishes the same articles: how to drive her crazy in bed, how to get muscles of steel in three weeks with five minutes’ training a day, what food to eat in order not to get ill, and various items about mental health, how to overcome sadness, depression and boils on your nose? Plus recently, a few suggestions on how to prevent an enlarged prostate, a subject which should actually be of some interest to you.

Very witty. You make me laugh like a drain.

Do you even have anything to eat at home? Is there anything in the fridge apart from pathetic ready meals?

I don’t have ready meals. I have good, fresh, abundant food, because I know perfectly well that you and people like you are always lecturing me, and I try to pre-empt them. I make myself fantastic salads and seitan burgers. I should also have some strawberries, and anyway, that’s enough, I’m going home.

Seitan burgers? Are you turning vegetarian, Guerrieri? Don’t tell me that because I couldn’t bear it. You’ve quit smoking, after two glasses of wine you say you’ve had enough, and gradually you’ve stopped eating anything that has any taste, like wonderful fried food, burnt hamburgers and fat tasty sausages, mortadella, desserts with cream, pizzas with lard instead of olive oil. You no longer drink spirits, and let’s not even mention sex, for heaven’s sake, because you’re not getting any of that, and now you’re even becoming a vegetarian? Do you drink nettle juice?

All right, I almost never eat meat these days. What of it?

Let’s just say I’m thinking seriously about whether or not it’s morally acceptable to eat meat.

What? Thinking seriously about what? You’ve gone mad. Or rather no – you’re getting old and you’re starting to have obsessions.

How old are you?

Forty-eight. What of it?

When you were a child, what did you think of a man who was nearly fifty?

It’s the wrong question. When I was a child a man of fifty was… very grown-up. But now—

When you were a child you thought that at the age of fifty a man was almost old. Your grandfather was seventy, he had friends who were younger, and to you they were all old.

Is that true or not?

I arrived home and the conversation fizzled out as quickly as it had started.

Award-winning, bestselling novelist Gianrico Carofiglio was born in Bari in 1961 and worked for many years as a prosecutor specializing in organized crime. He was appointed advisor of the anti-Mafia committee in the Italian parliament in 2007 and served as a senator from 2008 to 2013. Carofiglio is best known for the Guido Guerrieri crime series: Involuntary Witness, A Walk in the Dark, Reasonable Doubts, Temporary Perfections and now A Fine Line, all published by Bitter Lemon Press. His other novels include The Silence of the Wave. Carofiglio’s books have sold more than four million copies in Italy and have been translated into twenty-seven languages worldwide.

Howard Curtis has authored acclaimed translations from Italian and French for a long list of publishing houses.He has translated novels and other work by Georges Simenon, Jean-Claude Izzo, Gianrico Carofiglio and Luigi Pirandello.

Gianrico Carofiglio is one of five European speakers/writers who will talk Europe with Rosie Goldsmith during our Culture Matters – The *Euro Stars* Debate on 27 April at Europe House.

Thank you to Bitter Lemon Press for allowing us to publish this excerpt.